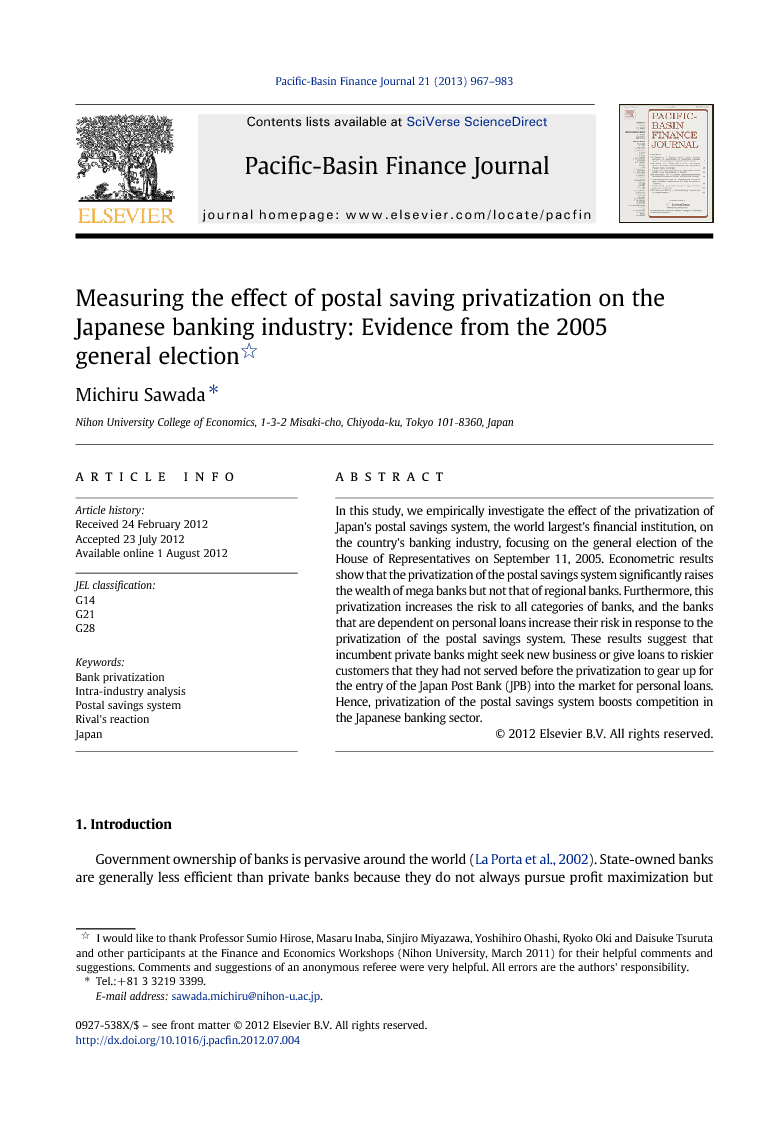 Government ownership of banks is pervasive around the world (La Porta et al., 2002). State-owned banks are generally less efficient than private banks because they do not always pursue profit maximization but instead frequently operate on political and social considerations.1 To improve the efficiency of state-owned banks, governments have promoted their privatization in many developing and developed countries since the late 1980s.2 Most studies on bank privatization have confirmed that bank performance more or less improves after privatization (Clarke et al., 2005). Furthermore, some studies find, through intra-industry analyses, that bank privatization can increase competition in the banking sector (Otchere and Chan, 2003, Otchere, 2005, Otchere, 2009 and Chen et al., 2005). In Japan, state-owned financial institutions also play important roles as financial intermediates. The postal savings system (PSS), a government-owned depository institution, collected huge funds from households. The deposits in the PSS peaked at 260 trillion yen (about $2.4 trillion) in 1999, which corresponded to 37% of Japan's total household deposits (Imai, 2009a). However, as a result of the strong backing by the then prime minister Junichiro Koizumi, privatization of the postal system was formally accepted in October 2005, when the postal privatization bills were passed in the Diet. In October 2007, according to the privatization bills, the independent public corporation Japan Post, which managed the postal system, was divided into four companies: a postal savings bank, an insurance company, a mail delivery company, and a post office network management company. The first two companies (the postal savings bank and the insurance company) will be fully privatized by 2017.3 In this paper, we empirically investigate how the privatization of Japan's PSS, the world's largest financial institution, affects the country's banking industry. In particular, we estimate its wealth and risk effects on the incumbent private banks in Japan by using the event study methodology. In the analyses, we use the general election of the House of Representatives on September 11, 2005, as the event. This election is considered a very valuable opportunity to measure the effect of the PSS's privatization because it was essentially a referendum on the privatization of the postal system, including the PSS (Imai, 2009a). Moreover, following the election, the ruling Liberal Democratic Party (LDP) and its coalition partners had more than a key two-thirds majority in the House of Representatives, which immediately indicated that the PSS would be privatized. We can understand the effect of the PSS's privatization on the Japanese banking sector by observing the reaction of the stock prices of the incumbent private banks to the election result. There are some studies on the effect of the privatization of Japan's PSS. Vollmer et al. (2009) investigates the details of the institutional background and the recent transformation of the Japanese PSS and conducts a case study on the privatization of Japan Post Bank, although it does not directly analyze the effect of postal saving privatization on the Japanese banking industry. They find that the market share of deposits in PSS decreases sharply from 1997 to 2008. Oohama and Asai [iBusiness, 2011 September, pp. 244–247] conduct a simple analysis of whether PPS's privatization has economic value by investigating the abnormal returns of regional banks around the time of the general election of 2005. They find that the abnormal returns for regional banks are negative and statistically significant and that those in rural areas are statistically significant, while those in urban areas are not. Our study differs from that of Oohama and Asai (2011) in that our study conducts more detailed and comprehensive analyses. First, we perform multivariate analyses, risk effect analyses, accounting analyses, tests of some important hypotheses (differential information effect and intra-industry effect) and tests of other important events, which are not performed by Oohama and Asai (2011). 4 Second, our study includes all listed banks (mega banks and city and trust banks as well as regional banks) as samples. It is considered important because large banks such as mega banks are exposed to direct competition with PSS at the nationwide level, especially in the cites, since PPS has nationwide branch network in both cities and rural areas ( Kuwayama, 2000 and Imai, 2009a). Specifically, we confirm statistically significant abnormal returns for mega banks. Third, with respect to empirical methodology, our study uses a system of seemingly unrelated regression equations that have been commonly used in previous studies to control contemporaneous shock ( Otchere and Chan (2003) for the privatization of the Commonwealth bank in Australia, and Chen et al. (2005) for the privatization of the bank of China Hong Kong), while Oohama and Asai (2011) use the simple event-study method. The system of seemingly unrelated regression equations is preferred to this method when examining regulatory events such as privatization that affect firms simultaneously in the same industry. 5 Our empirical analyses show that the PSS's privatization significantly raises the wealth of mega banks but not that of regional banks, suggesting that the larger banks gain a competitive advantage over Japan Post Bank (JPB), which is the new financial institution established following privatization. We also find that the privatization significantly increases the risk for all categories of banks. In addition, multivariate analyses show that the banks that depended on personal loans increase their risk in response to the PSS's privatization, suggesting that they might seek new business or give loans to riskier customers whom they had not entertained before the privatization in order to gear up for the JPB's new entry into the market for personal loans. Furthermore, as a result of the analysis of accounting measures, we find that mega banks remarkably outperform the JPB in terms of the ability to collect deposits from the pre- to the post-privatization period, which is consistent with the results of the event study analysis. The remainder of this paper is organized as follows. Section 2 discusses the institutional background of the Japanese PSS. Section 3 explains our hypotheses. Section 4 describes the empirical methodology. Section 5 presents the empirical results. Section 6 concludes the study.

In this study, we empirically investigate the effect of the privatization of postal savings system (PSS) on the Japanese banking industry by using the event study methodology. In the analyses, we focus on the general election of the House of Representatives on September 11, 2005, which was essentially a referendum on the privatization of the postal system. Econometric results show that the PSS's privatization significantly raises the wealth of mega banks but does not have a strong effect on the wealth of regional banks, suggesting that larger banks gain relatively competitive advantages against a newly privatized institution (JPB). We also find that the privatization significantly increases the risk for all categories of banks. Furthermore, multivariate analyses show that banks that are dependent on personal loans increase their risk in response to the PSS's privatization. Hence, those banks seem to seek new business or give loans to riskier customers whom they had not served before the privatization in order to gear up for competition with the JPB in the market for personal loans. In this sense, the PSS's privatization is likely to boost competition in the Japanese banking sector. Finally, it should be noted that this paper examines the short-term effect of the PSS's privatization. On the other hand, it is also important to investigate its longer-term effects because privatization is a long-standing process. Unfortunately, it is difficult to investigate such an effect at the moment because as stated above, in December 2009, the new ruling DPJ and its coalition partners froze the planned sale of shares in JPB; the shares have not been sold in the stock market yet. Therefore, the analysis of the longer-term effects of postal privatization remains an objective for future research.