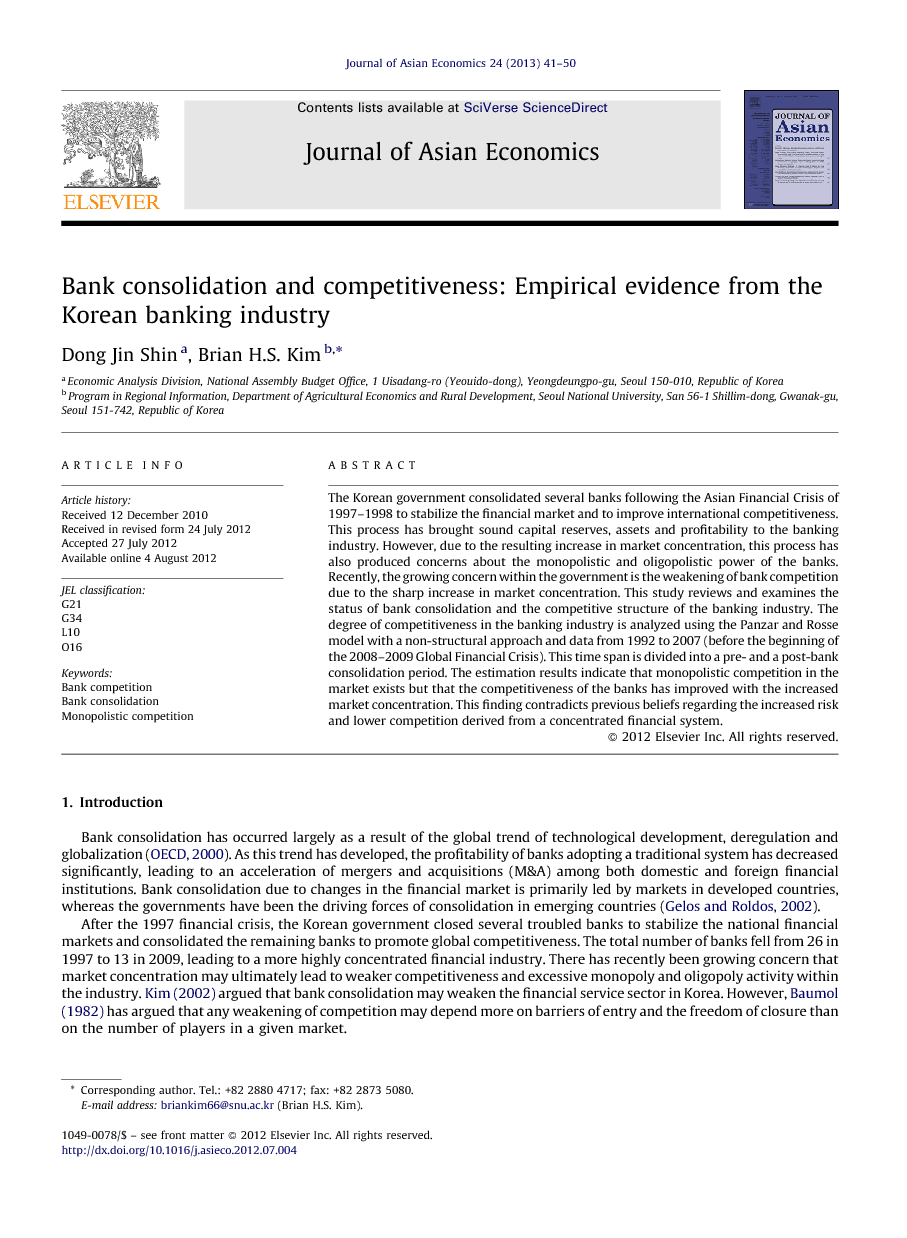 The Korean government consolidated several banks following the Asian Financial Crisis of 1997–1998 to stabilize the financial market and to improve international competitiveness. This process has brought sound capital reserves, assets and profitability to the banking industry. However, due to the resulting increase in market concentration, this process has also produced concerns about the monopolistic and oligopolistic power of the banks. Recently, the growing concern within the government is the weakening of bank competition due to the sharp increase in market concentration. This study reviews and examines the status of bank consolidation and the competitive structure of the banking industry. The degree of competitiveness in the banking industry is analyzed using the Panzar and Rosse model with a non-structural approach and data from 1992 to 2007 (before the beginning of the 2008–2009 Global Financial Crisis). This time span is divided into a pre- and a post-bank consolidation period. The estimation results indicate that monopolistic competition in the market exists but that the competitiveness of the banks has improved with the increased market concentration. This finding contradicts previous beliefs regarding the increased risk and lower competition derived from a concentrated financial system.

Bank consolidation has occurred largely as a result of the global trend of technological development, deregulation and globalization (OECD, 2000). As this trend has developed, the profitability of banks adopting a traditional system has decreased significantly, leading to an acceleration of mergers and acquisitions (M&A) among both domestic and foreign financial institutions. Bank consolidation due to changes in the financial market is primarily led by markets in developed countries, whereas the governments have been the driving forces of consolidation in emerging countries (Gelos and Roldos, 2002). After the 1997 financial crisis, the Korean government closed several troubled banks to stabilize the national financial markets and consolidated the remaining banks to promote global competitiveness. The total number of banks fell from 26 in 1997 to 13 in 2009, leading to a more highly concentrated financial industry. There has recently been growing concern that market concentration may ultimately lead to weaker competitiveness and excessive monopoly and oligopoly activity within the industry. Kim (2002) argued that bank consolidation may weaken the financial service sector in Korea. However, Baumol (1982) has argued that any weakening of competition may depend more on barriers of entry and the freedom of closure than on the number of players in a given market. In the last 10 years, the competitiveness of Korean banks has weakened compared to other advanced nations due to higher barriers of entry and the withdrawal of non-banking financial companies as banks’ potential competitors (Kim, 2002). Uncompetitive pricing activities have occurred in the market, where banks offer lower interest rates for deposits and charge higher interest rates for loans. As a result, due to a more highly concentrated banking industry, households and firms (small and medium sized) have higher obligations and fewer opportunities as debtors. As the competitiveness of banking industry becomes more globalized, the traditional policy of following similar industries (i.e., manufacturing) has limitations in the banking industry. Several foreign financial companies have entered the domestic market, whereas domestic financial companies are expanding their overseas financing and businesses. It is inappropriate to judge competitiveness based on domestic market conditions. The government must observe the industry from a different standpoint with regard to limiting and designing the competitiveness structure. Banks may become more efficient to improve their profitability given the competitive environment. Therefore, it is necessary to observe whether the competitiveness of banks has been strengthened following consolidations. To derive policy implications for future banking consolidation efforts, this paper reviews and examines the status of bank consolidation (e.g., changes in competition among banks following increases in market concentration) and the competition in the financial structure (e.g., the existence of monopolistic competition) over the last 12 years. The paper is organized as follows: in Section 2, we present two approaches to measure competition in the banking industry. Both the structural and non-structural approaches are described. In Section 3, the Panzar and Rosse model is described, as are its limitations found in other studies. In Section 4, the empirical analytic model and data are introduced, and Section 5 summarizes the estimation results. Finally, the conclusion and policy implications are provided in Section 6.

Few studies have explained the competitive structure of Korean banking industry, and their results appear to be inconsistent due to the failure to consider the effect of the financial crisis in 1997–1998. The Korean government conducted a radical restructuring and consolidation of the banking industry during this time, potentially leading the results of these studies to be biased. In this study, we overcome the limitation of previous studies and establish important comparable results of banks’ competitiveness before and after the financial crisis using two period data. A traditional financial intermediation approach was adopted in the first model to conduct the empirical analysis for banks’ competitiveness. Three methods with different control variables are used with interest revenue/total asset as the dependent variable. The empirical results showed that monopolistic competition exists in the Korean banking industry and that the degree of competition increases after the financial crisis with bank restructuring and consolidation. Therefore, even with increased concentration through bank consolidation and a reduction in the number of banks, competition is found to be higher, as banks are maximizing their interest revenues. This finding contradicts studies by Kim, Chun, and Owe (2004), Lee and Lee (2004), and Choi (2007), who argue that banks’ competitiveness weakened. Similar results are observed in the second approach, where the model adopted (total revenue/total assets) a dependent variable with three control variables. In this case, banks function as financial service operators seeking profit maximization similarly to average corporations. Comparing two periods (before and after the financial crisis), the results indicate that the banks are gradually changing and strengthening their positions as profit-oriented institutions away from institutions oriented toward public service. The empirical results demonstrated that following consolidation, financial institutions have been competing intensively for profitability and to maximize their income from interest and revenues. Consequently, it is important to consider the practice of bank consolidation, together with the removal of barriers from the financial industry, for the improvements of international competitiveness with a sound institutional basis. The limitations in this study are that to test the long-run equilibrium, we had to exclude ROA data from the first consolidation period (1997–2000) and negative ROA data of seven banks before the consolidation and six banks after the consolidation (see Appendix A). Nevertheless, our results may weaken the assertion that the degree of bank competition may have weakened due to higher barriers of entry and the collapse of non-banking financial companies. In other words, it no longer seems plausible that bank consolidation with a low degree of competition can ever lead to expanded financial system risk and have a negative effect on financial stability. Similarly, we argue that bank competition can never be strengthened by this approach, as the failure of very large banks will always burden the national economy.