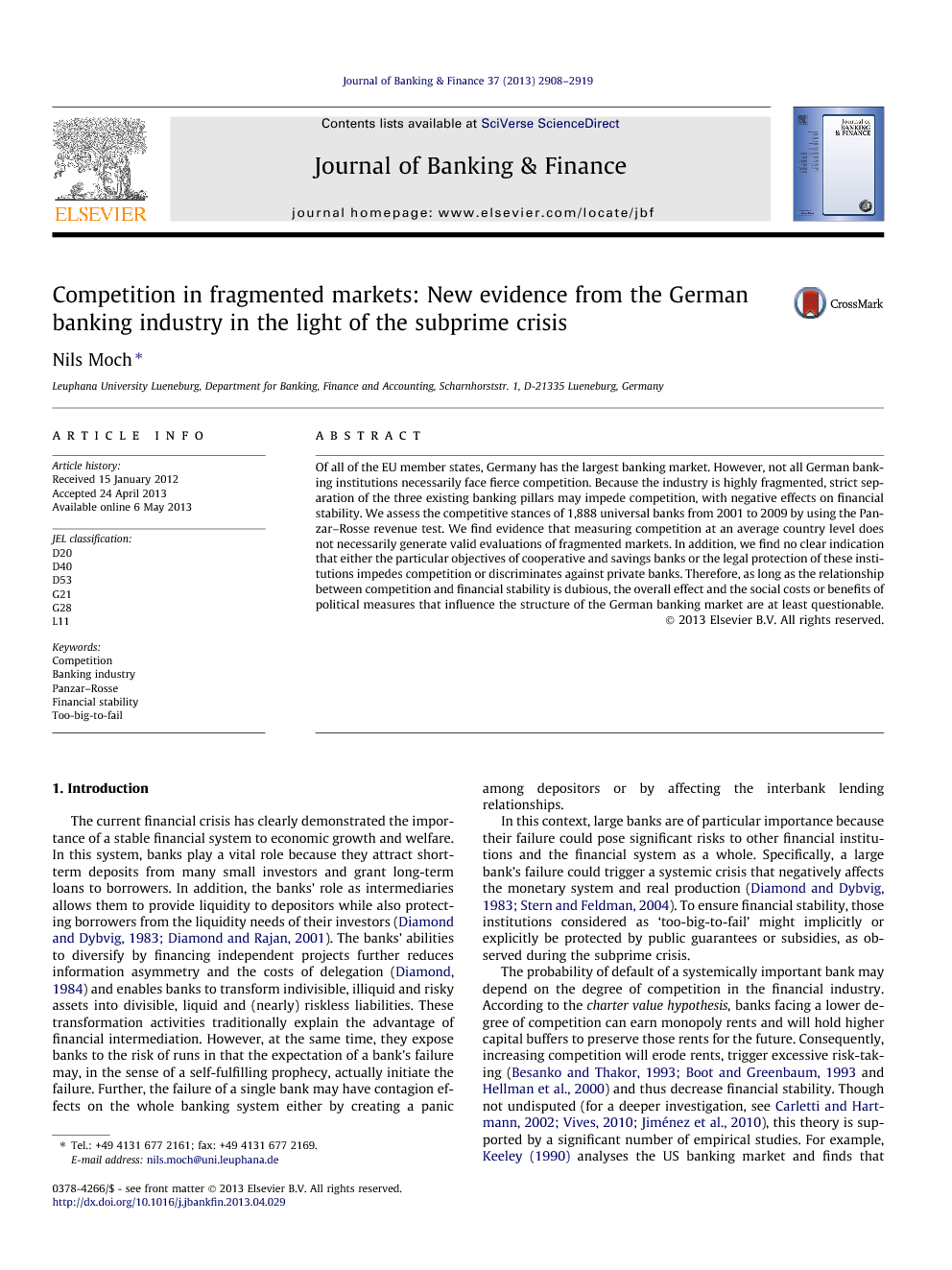 Of all of the EU member states, Germany has the largest banking market. However, not all German banking institutions necessarily face fierce competition. Because the industry is highly fragmented, strict separation of the three existing banking pillars may impede competition, with negative effects on financial stability. We assess the competitive stances of 1,888 universal banks from 2001 to 2009 by using the Panzar–Rosse revenue test. We find evidence that measuring competition at an average country level does not necessarily generate valid evaluations of fragmented markets. In addition, we find no clear indication that either the particular objectives of cooperative and savings banks or the legal protection of these institutions impedes competition or discriminates against private banks. Therefore, as long as the relationship between competition and financial stability is dubious, the overall effect and the social costs or benefits of political measures that influence the structure of the German banking market are at least questionable.

Using data for 1888 universal banks operating in Germany from 2001 to 2009, this paper provides answers to three important questions concerning the competitive conduct in the banking industry. First, we find evidence that measuring competition at an average country level (as previous studies have done) not necessarily generates valid evaluations of fragmented markets, as a sophisticated investigation reveals significant differences among the estimated H-statistics of the banks in the three existing banking pillars and the different size classes. Second, although there are differences among the particular subsamples, we find no clear indication that either the particular objectives of cooperative and savings banks or the legal protection of those institutions impedes competition because monopoly power is ruled out for all of our subsamples. Additionally, we cannot be certain about significant differences in competitive conduct among German universal banks without further information about cost structures or market demand elasticity. Third, according to our data, estimation results do not confirm that there was a change in competitive conduct among German universal banks during the subprime crisis. However, this issue requires further investigation and analysis in the future using additional data from the entire crisis period. With respect to the policy implications arising from these main findings, it is difficult to identify clear indications of discrimination against (large) private banks. Neither cooperative nor savings banks possess monopoly power, and differences in estimated H-values – which do not necessarily indicate differences in competitive conduct – might be related to diverging corporate objectives instead of legal protection. From this perspective, we find no distinct empirical evidence supporting the argument that the German banking system is outdated or overbanked and no evidence that large private institutions might suffer from competitive disadvantages or are at increased risk of being bailed out with negative consequences for financial stability. Consequently, the effects of initiatives aiming to equalise the competitive conditions of private banks and cooperative or savings banks – such as increasing the permeability of the three-pillar structure – are unpredictable from a competitive point of view if we cannot unambiguously confirm differences in competitive conduct. With respect to financial stability, the consequences of such initiatives are even more ambiguous under the charter value hypothesis. According to this hypothesis, lowering the level of competition for systemically important financial institutions, allowing them to earn monopoly rents and build up capital buffers, might improve financial stability. However, this causes multiple problems. First, reducing the degree of competition, if possible at all, is exactly the opposite of the aim of the Directorate-General for Competition of the European Commission. Second, strengthening the competitive position of (large) private banks or systemically important financial institutions to (possibly) foster financial stability would certainly have negative effects on the competitive position and solvency of (small) cooperative and savings banks. Based on the stabilising role of those institutions during the subprime crisis, policy makers must ensure that increasing the stability of (large) private banks is not achieved by decreasing the stability of cooperative and savings banks. Third, the relationship between competition and financial stability – and the validity of the charter value hypothesis itself – is hotly debated in the economic literature. Thus, questions continue about the remaining uncertainties about differences in competitive conduct among German universal banks, the effectiveness – in terms of overall effects and social costs or benefits – of political measures on banking sector competition and the relationship between competition and financial stability in general. These questions demonstrate the need for future research in this field and highlight the conflicts facing political and regulatory decision makers.