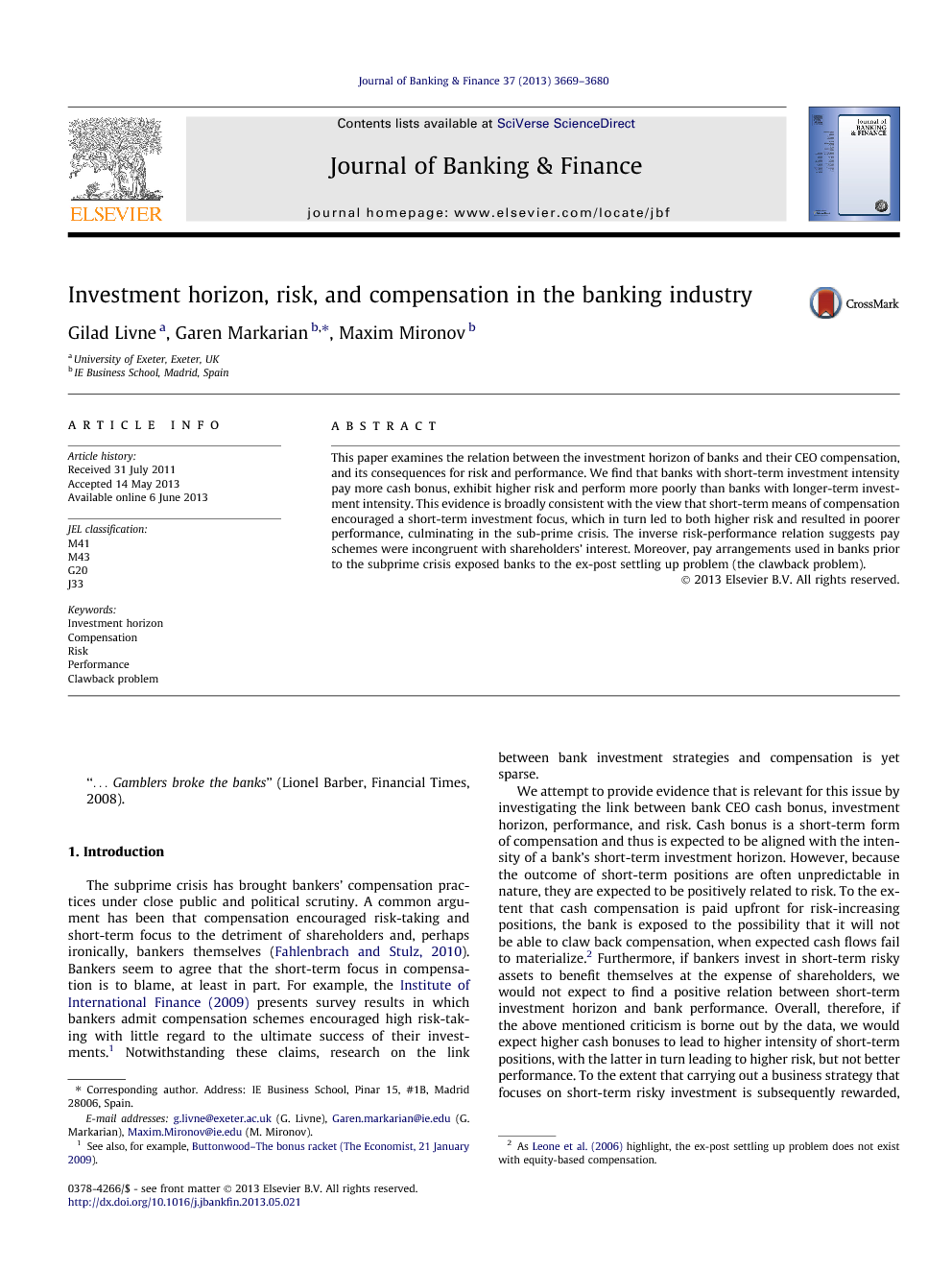 This paper examines the relation between the investment horizon of banks and their CEO compensation, and its consequences for risk and performance. We find that banks with short-term investment intensity pay more cash bonus, exhibit higher risk and perform more poorly than banks with longer-term investment intensity. This evidence is broadly consistent with the view that short-term means of compensation encouraged a short-term investment focus, which in turn led to both higher risk and resulted in poorer performance, culminating in the sub-prime crisis. The inverse risk-performance relation suggests pay schemes were incongruent with shareholders’ interest. Moreover, pay arrangements used in banks prior to the subprime crisis exposed banks to the ex-post settling up problem (the clawback problem).

The credit crisis has resulted in unprecedented loss of wealth across the globe. In debating the causes and remedies, compensation arrangements have been viewed as one of the causes of this crisis. In particular, bankers were accused of a short-term focus and speculative trading. We empirically investigate this issue, employing a panel of US banks, and looking at the relation between compensation and investment structure, with a further examination of risk and performance consequences. Our specific research questions are: (1) what is the relation between investment mix and CEO cash bonus compensation, and to what extent is this evidence consistent with the clawback problem? (2) Is there a relation between short-term investments and risk? (3) To the extent that shorter-term asset mix is positively related to cash bonus, is it also positively related to performance? We find evidence of a positive relation between short-term investments and CEO cash bonus. We furthermore document two important results: short-term investments are associated with higher share price volatility, and are simultaneously negatively related to firm profitability. These relations are consistent with the view that bank compensation arrangements have encouraged banks to increase their holding of risky trading assets, including the rapid increase in trading of subprime and Alt-A MBS, CMBS, and the other structured credit securities at the core of the credit crisis, providing evidence that compensation arrangements strongly discouraged long-term investment in some financial institutions. That cash was paid upfront, and cushioned CEOs exposure to compensation risk, in contrast to the recent findings of Fahlenbrach and Stulz (2010) which argue equity-based compensation exposed managers to the same risks as shareholders. Moreover, up-front bonuses created an agency problem to the extent that banks could not claw back past pay when performance deteriorated.