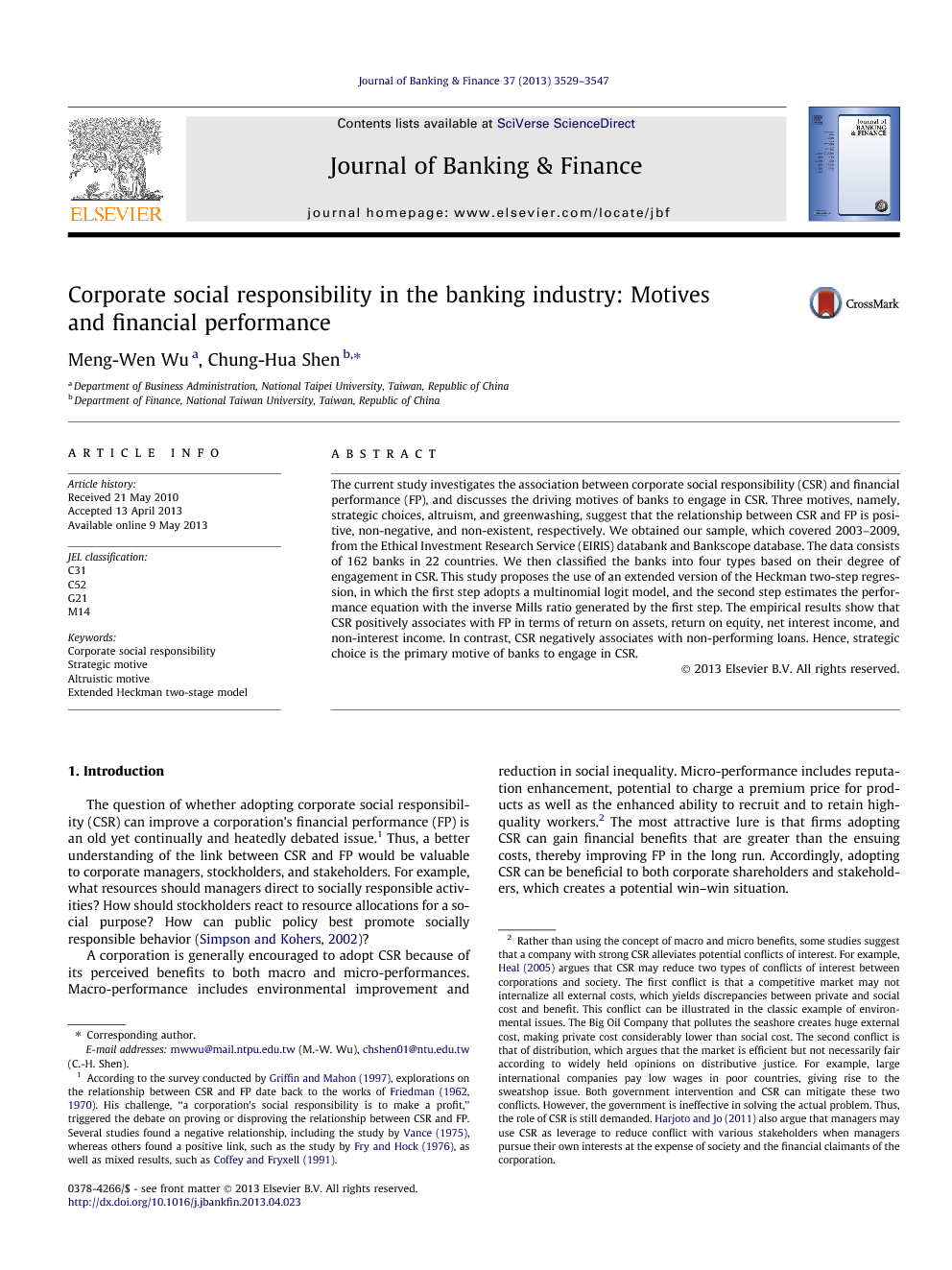 The current study investigates the association between corporate social responsibility (CSR) and financial performance (FP), and discusses the driving motives of banks to engage in CSR. Three motives, namely, strategic choices, altruism, and greenwashing, suggest that the relationship between CSR and FP is positive, non-negative, and non-existent, respectively. We obtained our sample, which covered 2003–2009, from the Ethical Investment Research Service (EIRIS) databank and Bankscope database. The data consists of 162 banks in 22 countries. We then classified the banks into four types based on their degree of engagement in CSR. This study proposes the use of an extended version of the Heckman two-step regression, in which the first step adopts a multinomial logit model, and the second step estimates the performance equation with the inverse Mills ratio generated by the first step. The empirical results show that CSR positively associates with FP in terms of return on assets, return on equity, net interest income, and non-interest income. In contrast, CSR negatively associates with non-performing loans. Hence, strategic choice is the primary motive of banks to engage in CSR.

This study investigates the association between CSR and FP in global banking sector and discusses the motives driving banks to engage in CSR. Our theoretical model for banking industry suggests that CSR could facilitate brand differentiation for strategic and altruistic banks, but not for greenwashing banks. Strategic banks utilize this advantage to increase NII, NonII, and net profits (ROA and ROE), as well as decrease NPL. Although altruistic banks are not interested in utilizing these advantages, their products are different from the perspectives of clients, thus resulting in an increase in NII and NonII. However, engaging in the altruistic CSR also increases cost; hence, the net effect on profit (ROA and ROE) is uncertain. Greenwashing banks provide only lip service, which does not affect their income and cost. Depending on the driving motives of strategic, altruistic, and greenwashing, CSR could generate a positive, uncertain, or no influence on net income. To explore this issue, we extend the Heckman two-step method to minimize the selection bias given the multi-level CSR data. Past studies using the similar type of data often ignore this bias. Our empirical results find that CSR positively affects NII, NonII, ROA, and ROE, and negatively affects NPL. Our evidence is consistent with existing theories of financial intermediary’s reputation, because we show that bank with higher CSR would have higher financial earnings and asset quality. Hence, in terms of profit measures, banks conducting more CSR activities outperform those banks that do not engage in CSR. The strategic motive seems to be predominant in the banking sector that engages in CSR. By using the aggregate CSR index, we can conclude that strategic motives mainly drive the CSR activities of banks. Our results are robust to the subprime crisis consideration, different specifications for the CSR dummies and more CSR classes. Thus, CSR and FP are positively linked. We suggest that governments should provide less support to banks engaging in CSR activities if the activities are based on strategic motives. Governments could support banks engaging in CSR activities with altruistic motives by providing loans to firms engaged in environmental protection. Studies merely investigating the relationship between CSR and FP tend to ignore the motive. Future research work on the following issues may be interesting. First, although our study is based on the overall aggregate index, examining the relation between CSR and FP using the sub-components of these indices, for example, environmental, social, and governance, is helpful in understanding the issue further. Second, as discussed in the Robust Section, no nonlinear relationship exists between CSR and FP in our case. Future studies can re-visit this nonlinear issue when more CSR choices are available. Finally, the follow-up effects of the private and social costs of the subprime financial crisis can also be considered in future studies.