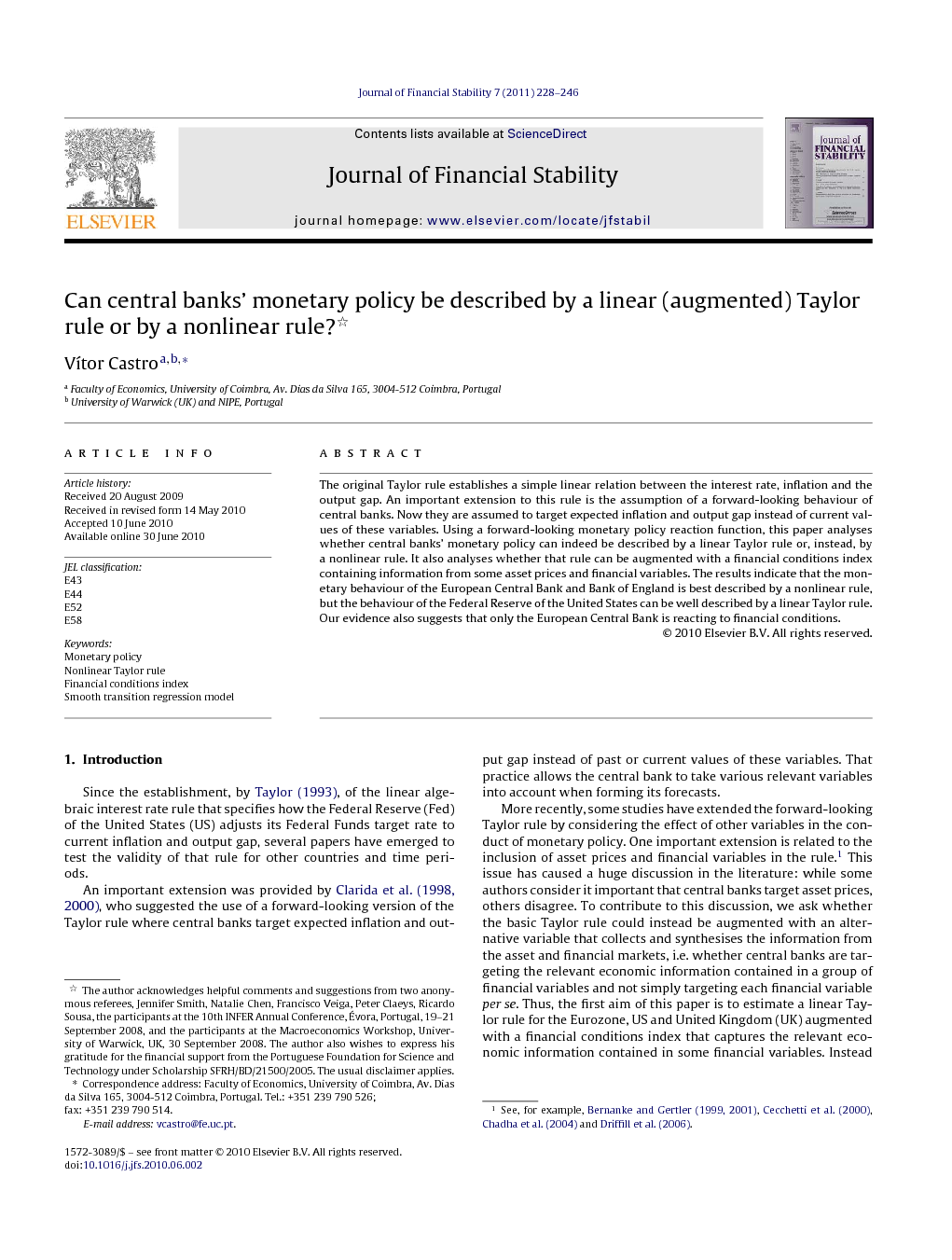 The original Taylor rule establishes a simple linear relation between the interest rate, inflation and the output gap. An important extension to this rule is the assumption of a forward-looking behaviour of central banks. Now they are assumed to target expected inflation and output gap instead of current values of these variables. Using a forward-looking monetary policy reaction function, this paper analyses whether central banks’ monetary policy can indeed be described by a linear Taylor rule or, instead, by a nonlinear rule. It also analyses whether that rule can be augmented with a financial conditions index containing information from some asset prices and financial variables. The results indicate that the monetary behaviour of the European Central Bank and Bank of England is best described by a nonlinear rule, but the behaviour of the Federal Reserve of the United States can be well described by a linear Taylor rule. Our evidence also suggests that only the European Central Bank is reacting to financial conditions.

Since the establishment, by Taylor (1993), of the linear algebraic interest rate rule that specifies how the Federal Reserve (Fed) of the United States (US) adjusts its Federal Funds target rate to current inflation and output gap, several papers have emerged to test the validity of that rule for other countries and time periods. An important extension was provided by Clarida et al., 1998 and Clarida et al., 2000, who suggested the use of a forward-looking version of the Taylor rule where central banks target expected inflation and output gap instead of past or current values of these variables. That practice allows the central bank to take various relevant variables into account when forming its forecasts. More recently, some studies have extended the forward-looking Taylor rule by considering the effect of other variables in the conduct of monetary policy. One important extension is related to the inclusion of asset prices and financial variables in the rule.1 This issue has caused a huge discussion in the literature: while some authors consider it important that central banks target asset prices, others disagree. To contribute to this discussion, we ask whether the basic Taylor rule could instead be augmented with an alternative variable that collects and synthesises the information from the asset and financial markets, i.e. whether central banks are targeting the relevant economic information contained in a group of financial variables and not simply targeting each financial variable per se. Thus, the first aim of this paper is to estimate a linear Taylor rule for the Eurozone, US and United Kingdom (UK) augmented with a financial conditions index that captures the relevant economic information contained in some financial variables. Instead of relying on particular asset prices or financial variables, like other studies do, the index built in this paper synthesises the relevant information provided by those variables in a single variable where the weight of each asset and financial variable is allowed to vary over time. The central bank may not be targeting a particular asset or financial variable all the time, but it is possible that it may target it in some occasions, i.e. when, by some reason, it acquires particular economic relevance. Thus, synthesising the information from several assets and financial variables in a weighted index will permit to extract the particular economic relevance of each variable at each point in time and, therefore, put together an amount of information that is more likely to be targeted by the central bank at any time. The results from the estimation of a linear forward-looking Taylor rule indicate that the European Central Bank (ECB) reacts to the information contained in the financial conditions index developed in this study, but the Fed and Bank of England (BOE) do not react to this information; they only take into account one or two financial variables and clearly do not target asset prices. The traditional Taylor rule is a policy rule that is derived from the minimization of a symmetric quadratic central bank's loss function assuming that the aggregate supply function is linear. However, in reality, this may not be the case and the central bank can have asymmetric preferences, i.e. it might assign different weights to expected negative and positive inflation and output gaps in its loss function. In that case, they will be following not a linear but a nonlinear forward-looking Taylor rule. Only very recently some studies started to consider these asymmetries or nonlinearities in the analysis of monetary policy.2 This paper extends the analysis into two areas not yet explored by those studies. First, it applies, for the first time, a nonlinear model to the study of the ECB's monetary policy, where the presence of asymmetries is taken into account directly in the structure of the model. This procedure will permit an answer to the following questions: Can the ECB's monetary policy be characterized by a nonlinear Taylor rule, or more precisely, is the ECB reacting differently to levels of inflation above and below the target? Does the ECB attempt to hit the inflation target precisely or keep inflation within a certain range? Second, this study also extends the nonlinear specification of the Taylor rule with the financial index used in the linear estimations to check whether, after controlling for nonlinearities, the ECB and the other two central banks are still (or not) reacting to the information contained in that index. The results of the estimation of the nonlinear smooth transition regression model are very interesting. First, they show that the ECB's monetary policy is better described by a nonlinear monetary rule than by a linear Taylor rule: it only reacts actively to inflation when it is above 2.5%; and it only starts to react to the business cycle when inflation is stabilised, i.e. well below 2.5%. Although this estimated threshold is slightly higher than the official target of 2%, this is an empirical result that confirms quite remarkably the main principles of the ECB's monetary policy. Second, the results also show that the ECB – contrary to the other central banks – continues to consider the information contained in the financial index even after nonlinearities are controlled for. Third, we find weak evidence to reject the linear model for the US but not for the UK, where the BOE seems to be pursuing a target range of 1.8–2.4% for inflation rather than the current official point target of 2%. The remainder of this paper is organized as follows: Section 2 presents a brief review of the literature on the Taylor rule. The specification used to estimate the linear Taylor rule is described in Section 3; this section also presents the data and analyses the empirical results of the estimation of that specification. The model used to estimate the nonlinear Taylor rule is presented and analysed in Section 4, as well as the results of its estimation. Section 5 emphasises the main findings of this paper and concludes.

This paper discusses two important issues. First, it asks whether central banks, besides targeting inflation and the output gap, are also reacting to the information contained in the asset prices and financial variables. Second, it analyses whether central banks’ monetary policy can be described by a linear forward-looking Taylor rule or, instead, by a nonlinear rule. Related to this second point, this study also considers whether they are pursuing a point target or a target range for inflation. The central banks considered in this analysis are the ECB, Fed and BOE. To answer the first question we built a financial conditions index from the weighted average of a group of asset prices and financial variables and included it, first, in the linear Taylor rule. The results indicate that while the ECB is reacting to the information contained in this index in order to avoid inflationary pressures from imbalances in the asset and financial markets, the Fed and BOE do not respond to changes or developments in these markets. In our opinion, this different behaviour might be one of the causes for the recent credit crunch to have arisen in the US (and UK) housing and financial markets and not in the Eurozone – even though its repercussions have spread to all developed markets and to the real economy. Thus, the first main conclusion of this study is that reacting to financial conditions might be a solution to avoid imbalances in the financial and asset markets and, consequently, it may help to avoid sharp economic slowdowns. The results mentioned above were obtained using a forward-looking linear Taylor rule. However, considering that the central banks might be responding differently to deviations of inflation above or below from their targets, we decided to test for the presence of nonlinearities in the rule and to estimate a forward-looking nonlinear model, in case they are present. The linearity tests indicate that the monetary policy followed by the ECB and by the BOE can be described by a nonlinear Taylor rule, but the evidence is not enough to clearly reject the linear Taylor rule for the Fed. The estimation of the nonlinear forward-looking Taylor rule using a smooth transition regression model provides interesting results. First, they show that the ECB pursuits a point target of about 2.5% for inflation. Second, the ECB only reacts actively to expected inflation when it is above that target and it only starts to react to the business cycle when inflation is stabilised well below 2.5%. Thus, another important conclusion of this study is that the nonlinear Taylor rule estimated in this paper encompasses quite remarkably the principles of the ECB monetary policy: (i) promoting price stability above everything; (ii) when that is achieved, promote conditions for a sustainable growth. The fact that the estimated inflation threshold is slightly higher than the 2% reference value announced by the ECB may mean that the ECB is in reality allowing for some monetary flexibility to accommodate the economic differences among the countries that constitute the Eurozone and to accommodate asymmetric shocks that may affect them differently. Even after the nonlinearities are controlled for, the ECB continues to consider the information contained in financial variables, which reinforces the first main conclusion of this study and allows us to say that the nonlinear Taylor rule, augmented with the financial conditions index developed in this study, is the policy rule that best describes the monetary behaviour of the ECB. Finally, the nonlinear Taylor rule estimated for the BOE indicates that this central bank is pursuing a target range of 1.8–2.4% for inflation rather than the official point target of 2%. The BOE reacts actively to inflation when it is outside that range, but, once inside, it only reacts to the business cycle and to the economic information provided by the credit spread variable. Besides extending this study to other central banks, another important extension would be to understand whether and how financial sector regulation and commercial banks’ off-balance sheet entities are taken into account in the central banks’ reaction function. We believe that such an analysis could contribute a little more to the understanding of the reasons for the recent credit crunch. Our intention is to proceed with this analysis in future work, as soon as more data become available. Another important point that deserves to be analysed in more detail is the one related with the replacement of industrial production with the unemployment rate. The robustness analysis provided by this paper has shown that the ECB seems to be more concerned with unemployment than the Fed or the BoE. Why is that the case? Can really the unemployment rate be used instead of economic growth in the Taylor rule? Or, are both equally important for Central Banks’ policy decisions? As these questions are beyond the scope of this paper, we leave it to be explored in a future paper.