عنوان انگلیسی
The effectiveness of non-standard monetary policy in addressing liquidity risk during the financial crisis : The experiences of the Federal Reserve and the European Central Bank
دانلود فوری مقاله + سفارش ترجمه 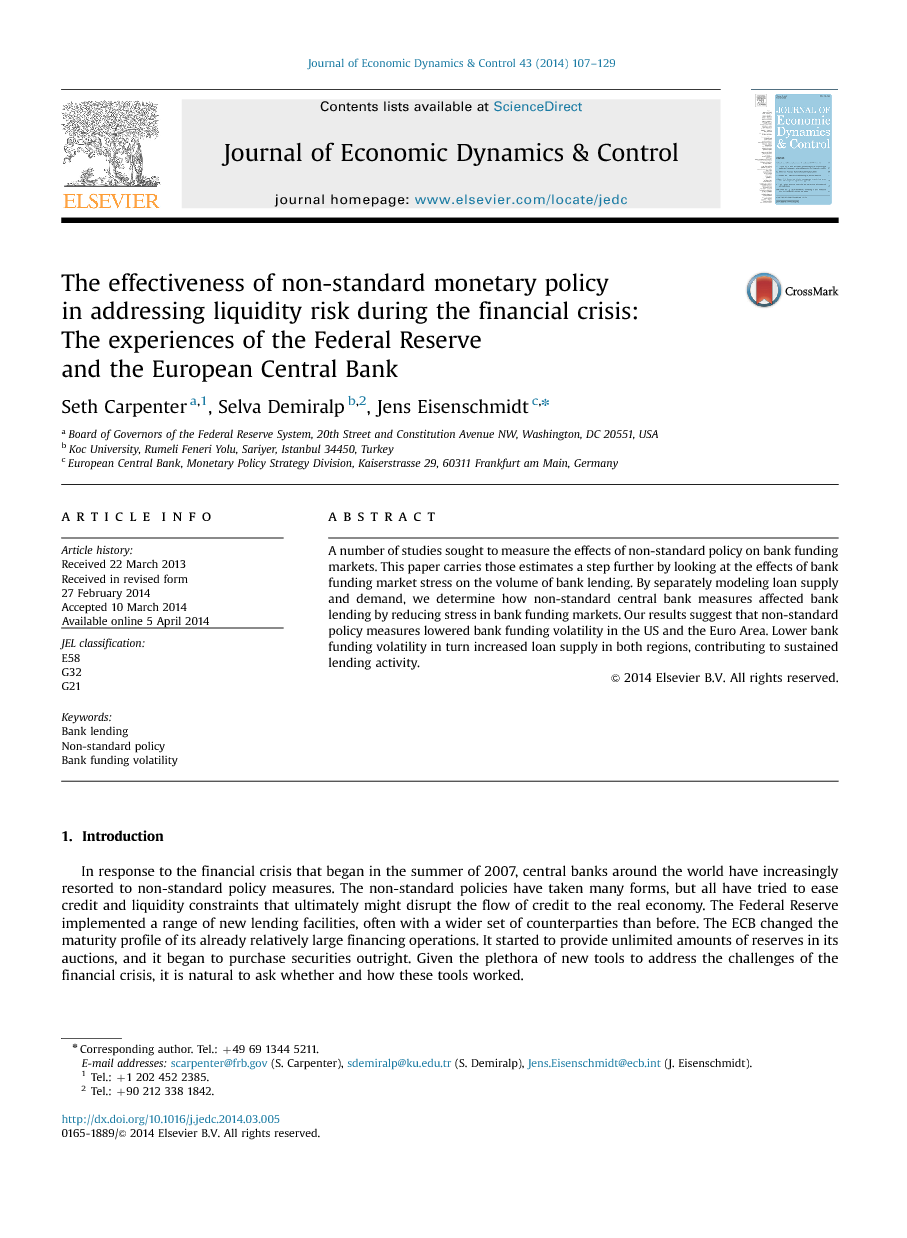 In response to the 2007 financial crisis, central banks around the world resorted to a variety of standard and non-standard measures. A growing number of studies assessed the effects of these measures, particularly focusing on the impact on the money markets. It remains difficult to know definitively how to identify the policy actions on market rates, in part because the counterfactual is impossible to know. Nevertheless, this paper attempts to further the discussion by focusing on the bank liquidity risk. Understanding the effect that the facilities had on money markets is not the complete story. Given the macroeconomic mandate of central banks, it is important to understand if the facilities, by easing conditions in money markets, resulted in greater extension of credit to the real side of the economy. Studying that linkage is the main contribution of this paper. We attempt to contribute to the literature by providing a comparative analysis of the experiences of the Fed and the ECB. In particular, we are interested in what effects the bank based non-standard measures had on bank lending in their respective regions. In order to answer this question we take a two-step approach. First, we investigate the relationship between bank liquidity risk and bank loans using a simultaneous equation framework, controlling for bank recapitalization measures, allowing us to separately model loan demand and supply. Second, we estimate the effects of bank based non-standard measures on bank liquidity risk. We find strong evidence that the bank based non-standard measures adopted by Fed and ECB eased conditions in money markets and that those easier conditions resulted in an increase in business lending by banks. The results appear to hold in both the US and the euro area. The estimated impact of non-standard measures on bank loans is a bit larger in the US. Without the TARP and any other measures adopted during that period, C&I loans would have been lower by 3 ½ percent under the equilibrium model and about 2 1/3 percent lower under the disequilibrium framework. Meanwhile, without the FRFA and SMP in the euro area, NFC loans would have been lower by 1 percent. As we discussed earlier in the paper, the Federal Reserve made a relatively large change to its operational framework with the introduction of the TAF, whereas the changes that the ECB made in the overall framework may be seen as relatively minor in the early stages of the crisis. In addition, the more comprehensive recapitalization of US banks may also play a role in explaining the difference in the effectiveness of the non-standard measures of either side of the Atlantic.