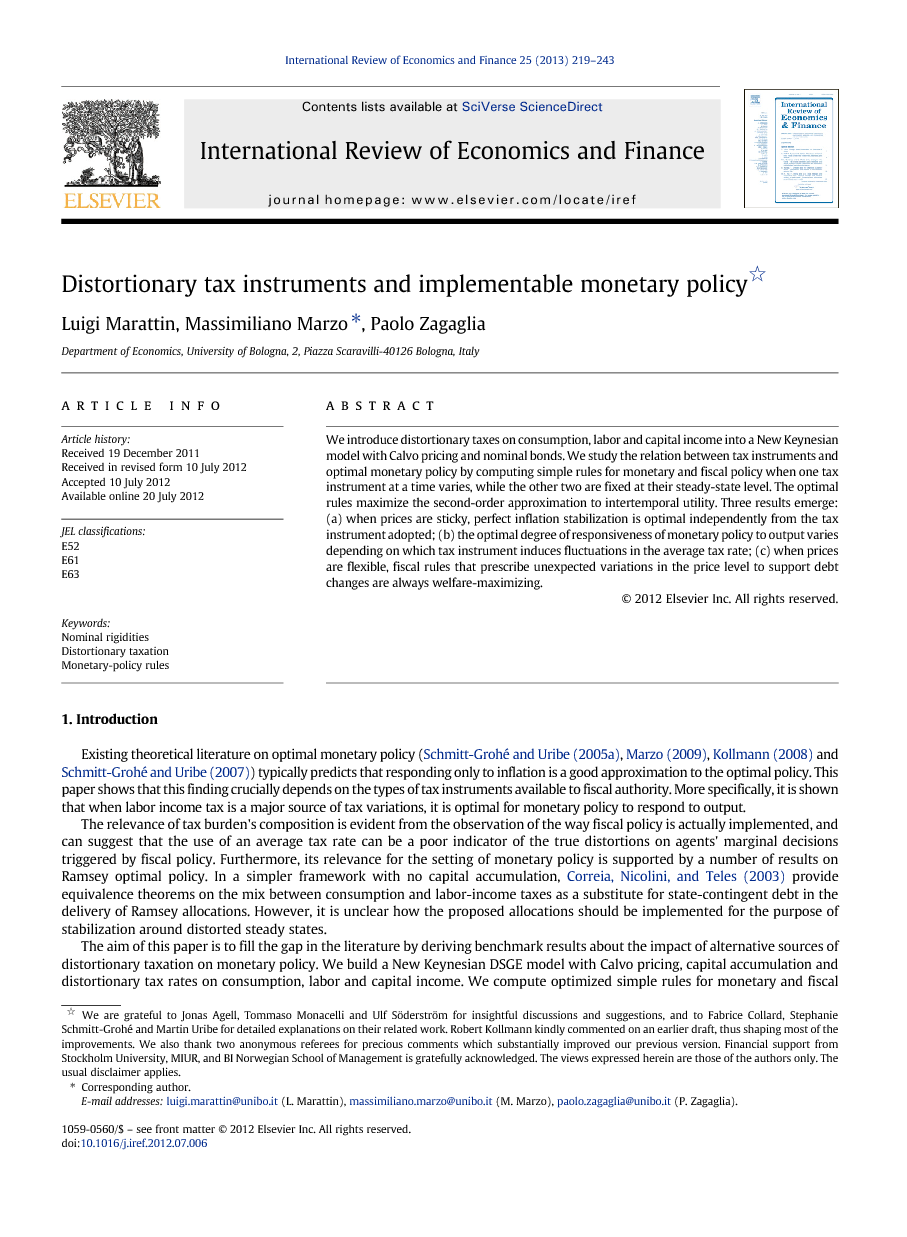 We introduce distortionary taxes on consumption, labor and capital income into a New Keynesian model with Calvo pricing and nominal bonds. We study the relation between tax instruments and optimal monetary policy by computing simple rules for monetary and fiscal policy when one tax instrument at a time varies, while the other two are fixed at their steady-state level. The optimal rules maximize the second-order approximation to intertemporal utility. Three results emerge: (a) when prices are sticky, perfect inflation stabilization is optimal independently from the tax instrument adopted; (b) the optimal degree of responsiveness of monetary policy to output varies depending on which tax instrument induces fluctuations in the average tax rate; (c) when prices are flexible, fiscal rules that prescribe unexpected variations in the price level to support debt changes are always welfare-maximizing.

This paper studies the role of tax composition for the optimal design of simple rules for monetary and fiscal policy. We formulate a New Keynesian model with Calvo pricing and three types of distortionary taxes — taxes on consumption, capital and labor income. We assume that one of the tax rates varies at a time as a function of the deviation of government liabilities from the deterministic steady state. The second-order approximation method of Schmitt-Grohé and Uribe (2004) is used to obtain a nonlinear solution, and to compute welfare-maximizing coefficients for the policy rules. Three main results emerge. In a model with price stickiness, inflation stabilization is optimal independently from the tax instrument considered, and optimal fiscal policy is passive in the sense of Leeper (1991). Differently from Schmitt-Grohé and Uribe (2007), we find that the optimal degree of responsiveness of monetary policy to output can depend on the instrument for tax policy. In particular, when labor-income taxes follow a simple policy rule, underestimating the optimal response to output can lead to a substantial welfare loss. This is due to the fact that acyclical monetary policy is unable to pin down unique macroeconomic equilibria, and the policy mix produces different outcomes that are equally achievable by the policy planner. Finally, with flexible prices, ‘active’ rules for fiscal policy that prescribe unexpected variations in the price level are optimal independently from the tax instrument. This confirms the results obtained by Kollmann (2008). More generally, our results tend to favor a more interventionist role by monetary authority, as generally opposed by the literature on optimal monetary policy. These results emerge because of the role played by distortionary taxation as inductors of output volatility, as clearly showed by Posch (2011). Since welfare measures penalizes volatility originating both from inflation and output, a monetary policy coefficient on output targeting different than zero, coupled with inflation targeting coefficients, achieve the best policy configuration in terms of maximized welfare. During the past ten years, Euro Area (EA, henceforth) and US have adopted a different monetary policy targeting scheme. US have considered inflation targeting with at least the same importance assigned to output targeting. European Central Bank (ECB), instead, is much more focused on inflation targeting. Both US and EA share a similar strategy for fiscal policy, very similar to the long-term solvency rule adopted by Leeper (1991). Our results basically show that monetary policy should be set according to the degree of cyclicality of fiscal policy. Under this respect, the approach taken by the Fed seems more respectful of the underlying distortions of the economy. The strict inflation targeting procedure adopted by ECB, instead, does not necessarily consider the distorsions emerging from the real and nominal side of the economy as a constraint. Our work shows that setting monetary policy without regards to distortions induced by taxation, does not turn out to be optimal. This is because the type of taxation induced by different types of fiscal policy generates non-symmetric real effects via the various substitution effects, which, in turn, imply different impacts on volatility of output and inflation.