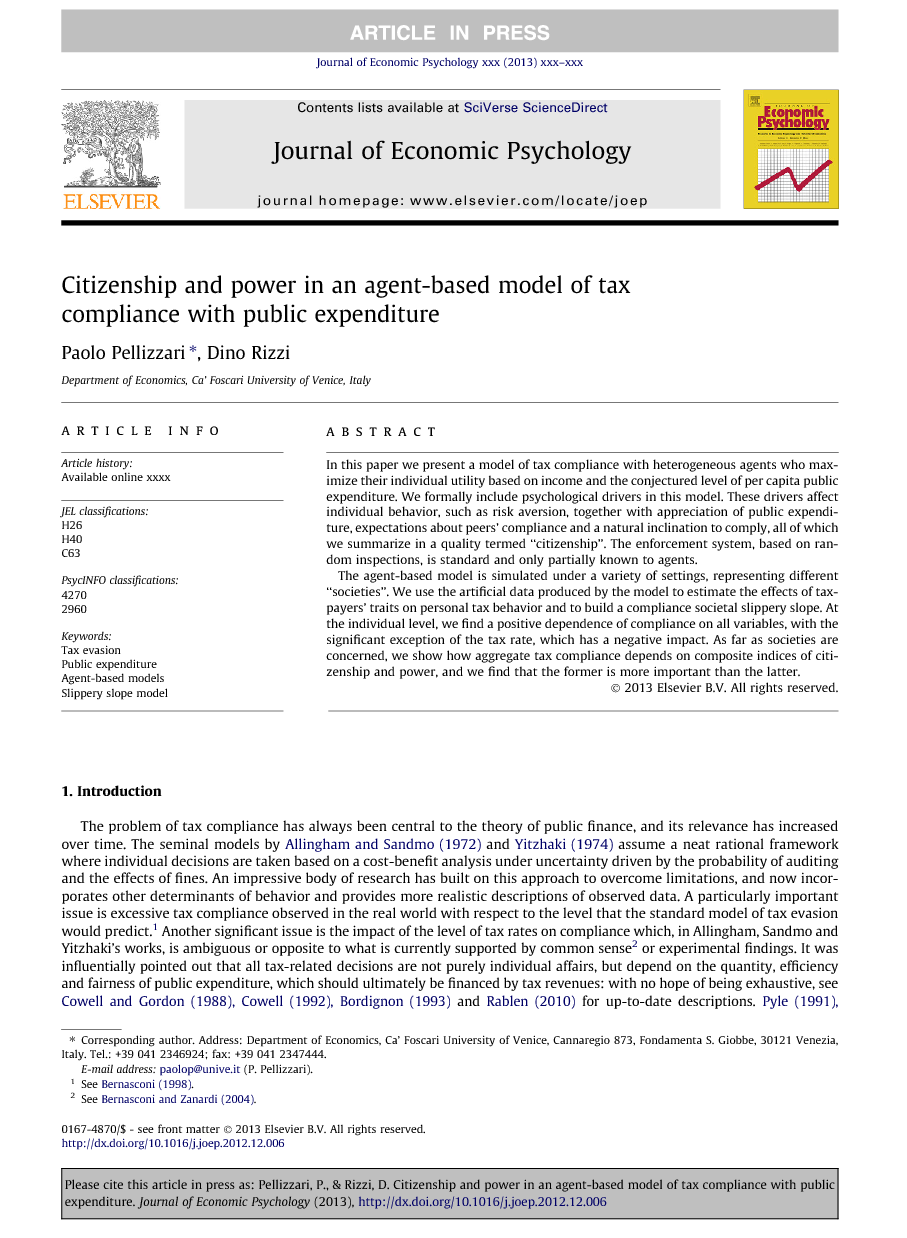 In this paper we present a model of tax compliance with heterogeneous agents who maximize their individual utility based on income and the conjectured level of per capita public expenditure. We formally include psychological drivers in this model. These drivers affect individual behavior, such as risk aversion, together with appreciation of public expenditure, expectations about peers’ compliance and a natural inclination to comply, all of which we summarize in a quality termed “citizenship”. The enforcement system, based on random inspections, is standard and only partially known to agents. The agent-based model is simulated under a variety of settings, representing different “societies”. We use the artificial data produced by the model to estimate the effects of taxpayers’ traits on personal tax behavior and to build a compliance societal slippery slope. At the individual level, we find a positive dependence of compliance on all variables, with the significant exception of the tax rate, which has a negative impact. As far as societies are concerned, we show how aggregate tax compliance depends on composite indices of citizenship and power, and we find that the former is more important than the latter.

We described an agent-based model of individual tax compliance, where heterogeneous agents maximize utility under risk, based on several individual features, such as their preference for public expenditure, their personal attitudes to comply, conformity and risk aversion. Decisions obviously depend not only on individual traits, but also on the perceived quality and quantity of per capita public expenditure and on the recognition that the bulk of revenues comes from other taxpayers. Simulations show a wide range of conducts, spanning from full honesty to massive underreporting, as expected from the agents’ large degree of heterogeneity. As a whole, however, each society of taxpayers has an aggregate behavior shaped by meta-parameters that describe distributions of individual features. From our artificial cross-section data we estimate a model that shows how individual compliance depends positively on citizenship-related attributes and on the strength of the enforcement system. By contrast, the tax rate negatively affects compliance, other things being fixed. We then described and built indices of citizenship and power based on meta-parameters in several societies, and estimated a slippery slope fitting the artificial data we generated. This exercise produced a surface that is remarkably similar, but adds significant insight to previous works by other scholars, stressing the role of habits and beliefs that contributes to the success of a civil community. Estimates show that, in general, both citizenship and power are required to achieve high compliance, where the former has a greater impact than the latter, even though this may be caused to some extent by our exploratory choice of meta-parameters, which are not calibrated to any specific situation.