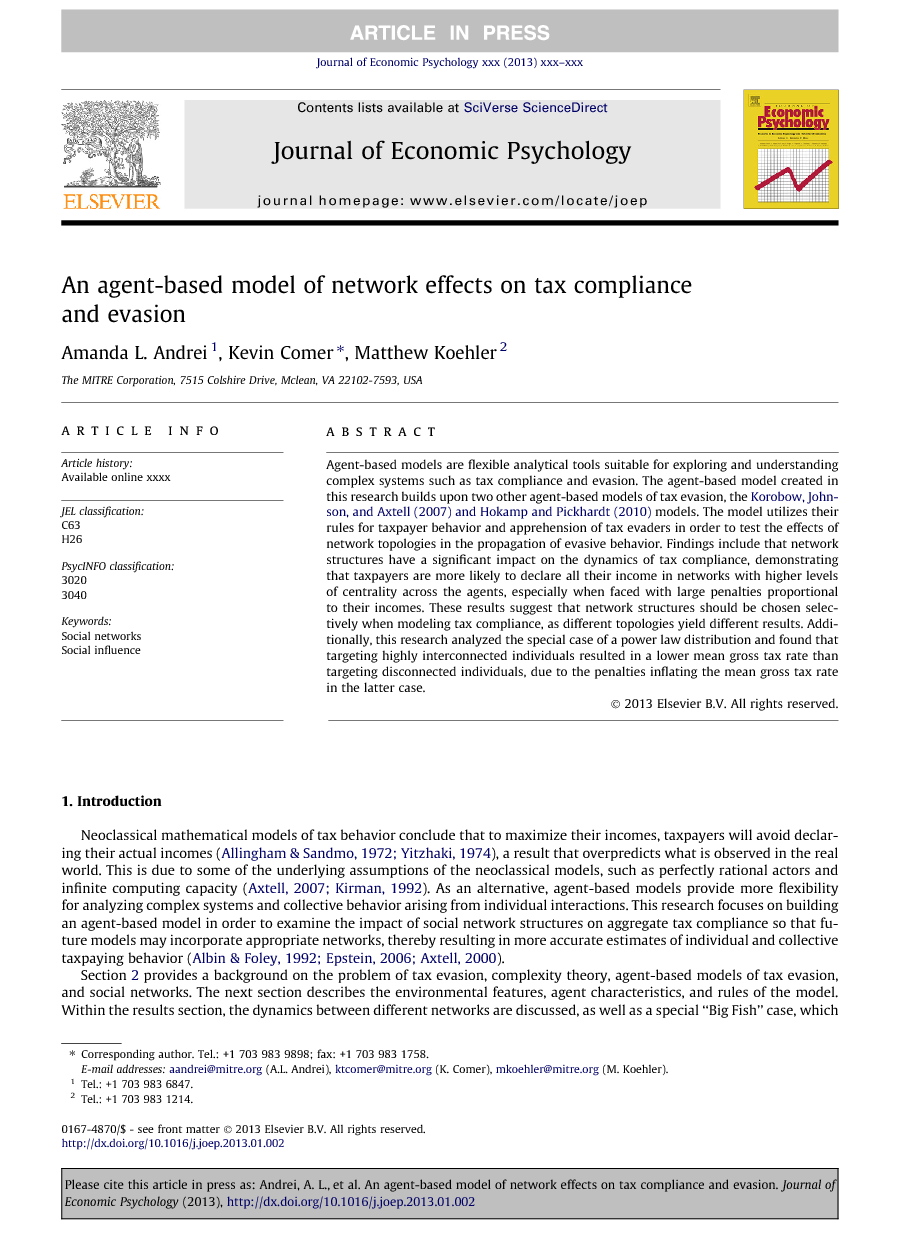 Agent-based models are flexible analytical tools suitable for exploring and understanding complex systems such as tax compliance and evasion. The agent-based model created in this research builds upon two other agent-based models of tax evasion, the Korobow et al., 2007 and Hokamp and Pickhardt, 2010 models. The model utilizes their rules for taxpayer behavior and apprehension of tax evaders in order to test the effects of network topologies in the propagation of evasive behavior. Findings include that network structures have a significant impact on the dynamics of tax compliance, demonstrating that taxpayers are more likely to declare all their income in networks with higher levels of centrality across the agents, especially when faced with large penalties proportional to their incomes. These results suggest that network structures should be chosen selectively when modeling tax compliance, as different topologies yield different results. Additionally, this research analyzed the special case of a power law distribution and found that targeting highly interconnected individuals resulted in a lower mean gross tax rate than targeting disconnected individuals, due to the penalties inflating the mean gross tax rate in the latter case.

Neoclassical mathematical models of tax behavior conclude that to maximize their incomes, taxpayers will avoid declaring their actual incomes (Allingham and Sandmo, 1972 and Yitzhaki, 1974), a result that overpredicts what is observed in the real world. This is due to some of the underlying assumptions of the neoclassical models, such as perfectly rational actors and infinite computing capacity (Axtell, 2007 and Kirman, 1992). As an alternative, agent-based models provide more flexibility for analyzing complex systems and collective behavior arising from individual interactions. This research focuses on building an agent-based model in order to examine the impact of social network structures on aggregate tax compliance so that future models may incorporate appropriate networks, thereby resulting in more accurate estimates of individual and collective taxpaying behavior (Albin and Foley, 1992, Epstein, 2006 and Axtell, 2000). Section 2 provides a background on the problem of tax evasion, complexity theory, agent-based models of tax evasion, and social networks. The next section describes the environmental features, agent characteristics, and rules of the model. Within the results section, the dynamics between different networks are discussed, as well as a special “Big Fish” case, which focuses on the impact of power law networks on taxpayers’ compliance. The discussion section includes commentary on findings, broader implications, and potential work for the future. It should be noted that the authors are not presenting a realistic taxing regime that is then evaluated, as such “actual” rates of tax evasion are not provided for comparison. The authors do note, however, that the results of the model are plausible given a 2008 United States Internal Revenue Service estimate of an 84 percent voluntary tax compliance (US Department of the Treasury, 2009). Rather, the authors present a highly stylized taxing regime in order to highlight one main feature: the effect of changing the information flow among taxpaying entities. This being the case, readers should bear in mind several particularly strong assumptions contained in the model, namely, (1) a perfectly flat tax rate and (2) a penalty function used when taxpayers are caught not paying taxes, which can grow without bounds as a taxpayer’s income increases.

This research has built upon two important agent-based models of tax evasion, the NACSM developed by Korobow et al. (2007) and the model developed by Hokamp and Pickhardt (2010). The agent-based model created in this research used the apprehension rules of the NACSM and the behavioral rules from Hokamp and Pickhardt (2010) in order to test the impacts and effects of seven types of network structures on aggregate tax compliance. It was discovered that there are in fact two network structures that significantly influence taxpaying behavior: the Erdős–Rényi network and the Power Law distributed network. In these network structures, information and influence is propagated and disseminated much more quickly than in the five other structures tested. This is attributed to the closeness centrality of the networks, which allows information about maximum payoffs to travel through shorter distances and to many more agents at once. This model was highly stylized and had many of the nuances of real world tax regimes removed in order to demonstrate the impact social networks upon tax compliance and evasion. While some of the equations are more abstract than what might be found in more realistic models of evasion, this is a necessary step in exploring the complexity of the tax system in more depth and detail. Having completed this step, we plan to refine this model by including assumptions and equations that accurately reflect real world tax systems as embedded in their own socioeconomic and political contexts. These findings have profound implications for understanding tax evasion. Future models of tax compliance should explicitly state and explain what network structures they implement, as well as why those topologies were chosen. Furthermore, policymakers may have better insight into taxpaying behavior if they know the potential social structures of individuals, communities, organizations, and institutions. While it is outside the scope of this research to provide policy recommendations, these methodologies and findings provide a foundation for future exploration of tax compliance in a myriad of disciplines and fields.