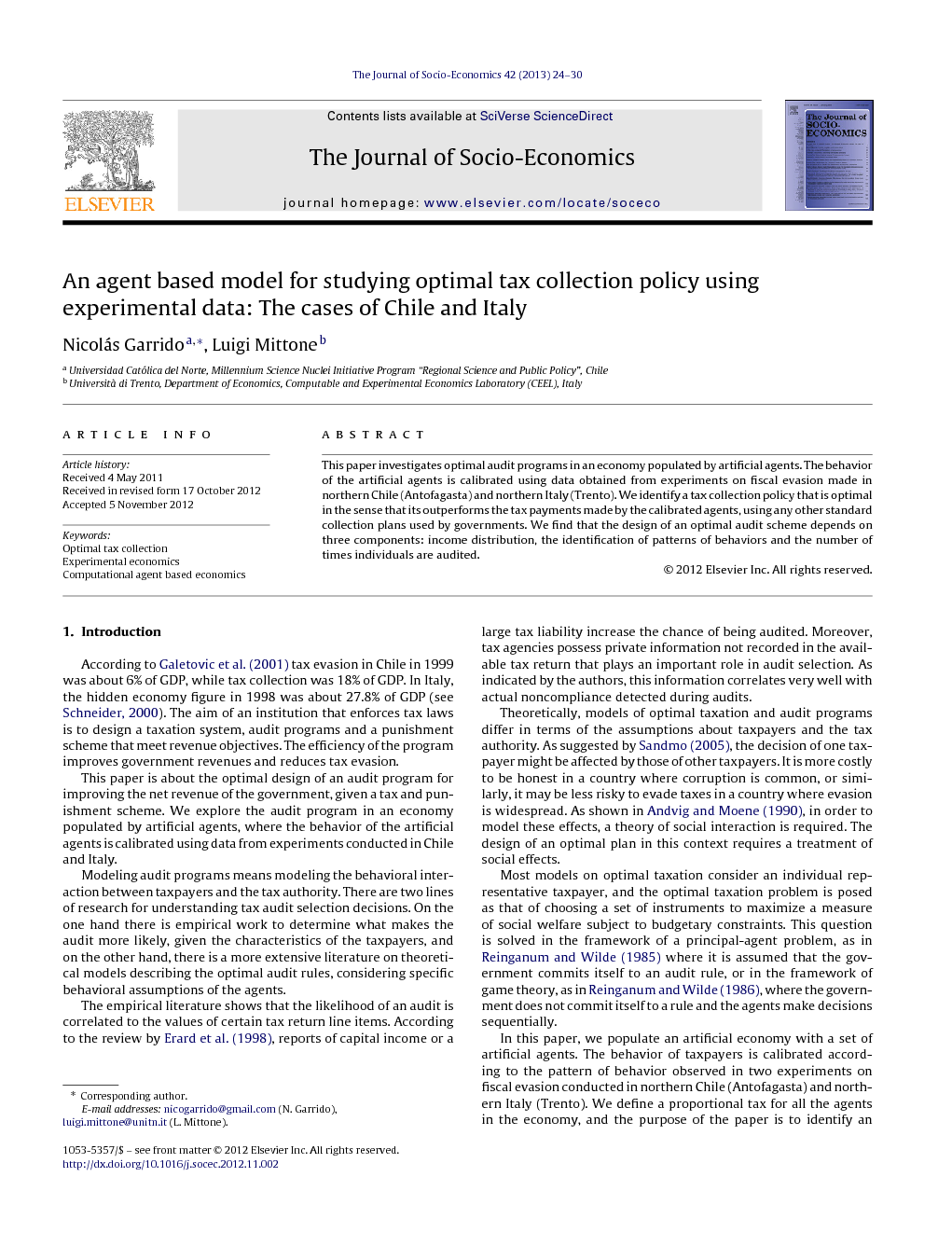 This paper investigates optimal audit programs in an economy populated by artificial agents. The behavior of the artificial agents is calibrated using data obtained from experiments on fiscal evasion made in northern Chile (Antofagasta) and northern Italy (Trento). We identify a tax collection policy that is optimal in the sense that its outperforms the tax payments made by the calibrated agents, using any other standard collection plans used by governments. We find that the design of an optimal audit scheme depends on three components: income distribution, the identification of patterns of behaviors and the number of times individuals are audited.

According to Galetovic et al. (2001) tax evasion in Chile in 1999 was about 6% of GDP, while tax collection was 18% of GDP. In Italy, the hidden economy figure in 1998 was about 27.8% of GDP (see Schneider, 2000). The aim of an institution that enforces tax laws is to design a taxation system, audit programs and a punishment scheme that meet revenue objectives. The efficiency of the program improves government revenues and reduces tax evasion. This paper is about the optimal design of an audit program for improving the net revenue of the government, given a tax and punishment scheme. We explore the audit program in an economy populated by artificial agents, where the behavior of the artificial agents is calibrated using data from experiments conducted in Chile and Italy. Modeling audit programs means modeling the behavioral interaction between taxpayers and the tax authority. There are two lines of research for understanding tax audit selection decisions. On the one hand there is empirical work to determine what makes the audit more likely, given the characteristics of the taxpayers, and on the other hand, there is a more extensive literature on theoretical models describing the optimal audit rules, considering specific behavioral assumptions of the agents. The empirical literature shows that the likelihood of an audit is correlated to the values of certain tax return line items. According to the review by Erard et al. (1998), reports of capital income or a large tax liability increase the chance of being audited. Moreover, tax agencies possess private information not recorded in the available tax return that plays an important role in audit selection. As indicated by the authors, this information correlates very well with actual noncompliance detected during audits. Theoretically, models of optimal taxation and audit programs differ in terms of the assumptions about taxpayers and the tax authority. As suggested by Sandmo (2005), the decision of one taxpayer might be affected by those of other taxpayers. It is more costly to be honest in a country where corruption is common, or similarly, it may be less risky to evade taxes in a country where evasion is widespread. As shown in Andvig and Moene (1990), in order to model these effects, a theory of social interaction is required. The design of an optimal plan in this context requires a treatment of social effects. Most models on optimal taxation consider an individual representative taxpayer, and the optimal taxation problem is posed as that of choosing a set of instruments to maximize a measure of social welfare subject to budgetary constraints. This question is solved in the framework of a principal-agent problem, as in Reinganum and Wilde (1985) where it is assumed that the government commits itself to an audit rule, or in the framework of game theory, as in Reinganum and Wilde (1986), where the government does not commit itself to a rule and the agents make decisions sequentially. In this paper, we populate an artificial economy with a set of artificial agents. The behavior of taxpayers is calibrated according to the pattern of behavior observed in two experiments on fiscal evasion conducted in northern Chile (Antofagasta) and northern Italy (Trento). We define a proportional tax for all the agents in the economy, and the purpose of the paper is to identify an optimal control plan, i.e. the frequency of audits for every agent in the economy so that the government obtains an optimal collection of taxes in the economy. Following Homer and Denis (1988), we assume that the tax authority is a revenue-maximizing agency. The agency can earn high net revenues by doing a good job, firstly on collecting revenue and secondly on deterring underpayments that threaten to undermine self-enforcement. We use the theory of finite automata for capturing the experimental behavior of subjects and integrate this into the simulated model because it provides us with a dynamic explanation of agent behavior. Working with finite automata means that we assume that an individual decides whether to evade or not according to the state where she is. For instance, evasion might be very likely when an individual is in the state “audited in the previous period”, or in the state “audited and fined three periods ago”. The standard expected utility model of the income reporting decision discussed in Allingham and Sandmo (1972) or more behavioral alternatives, such as that presented by Dhami and Nowaihi (2007) using Prospect Theory, do not take into account the changes in individual state as a consequence of the interaction with the tax authority. We organize the paper by first presenting the structure of our artificial economy. We then present the experiments carried out in Chile and Italy. Through a short introduction to the theory of finite automata we show how we captured the behavior of the subjects in the experiments. Following this, we run the simulated experiments and analyze the results. Finally, we discuss the most relevant features of our experiment and make our conclusions.

In this paper we integrate techniques from behavioral economics and computational economics into an aggregate economic model to explore policy on optimal taxation. We assume that the taxation and punishment scheme is a given and that the tax authority, given an imperfect ability to monitor taxpayers, has to design audit schemes that optimize government revenues. The agents populating our economy behave according to two behavioral patterns that explain more than 70% of the behavior of subjects who participated in experiments in Chile and Italy on taxation. In those experiments we identified honest taxpayers and subjects that behave strategically according to the bomb-crater-effect pattern described in Mittone (2006) and Garrido and Mittone (2008). These agents have a higher probability of evading right after being audited. In the framework of our model, we found that the design of an optimal audit scheme depends on three components; income distribution, the identification of patterns of behavior and the number of periods in the history of an individual in which he is audited. When the distribution of income is unequal, it is worthwhile for the tax authority to develop strategies for catching the richest taxpayers who are more likely to evade. Thus, in our case when there is income inequality, the tax authority develops a strategy targeting the agents in the last deciles who behave according to the bomb-crater-effect pattern. On the other hand, when income is uniformly distributed, the tax authority changes its strategy by spreading its audits throughout the population to maximize the the expected value of the each audit. In this case, the authority takes into account that each audit verifies the last four periods of contributions made by the taxpayer. The basic principle underlying this is that the tax authority attempts to increases the expected revenue computed by the interaction between the probability of catching an evader and the fine that he would have to pay. According to the three components previously described, the tax authority will develop strategies for increasing the probability or increasing the amount of the potential fine. Finally, future integration of the type of strategy that we propose in this model requires addressing the learning capacities of the agents. This eventually means that some experiments with subjects would have to be designed for learning how people learn in specific contexts, so that this can also be calibrated into the computer model.