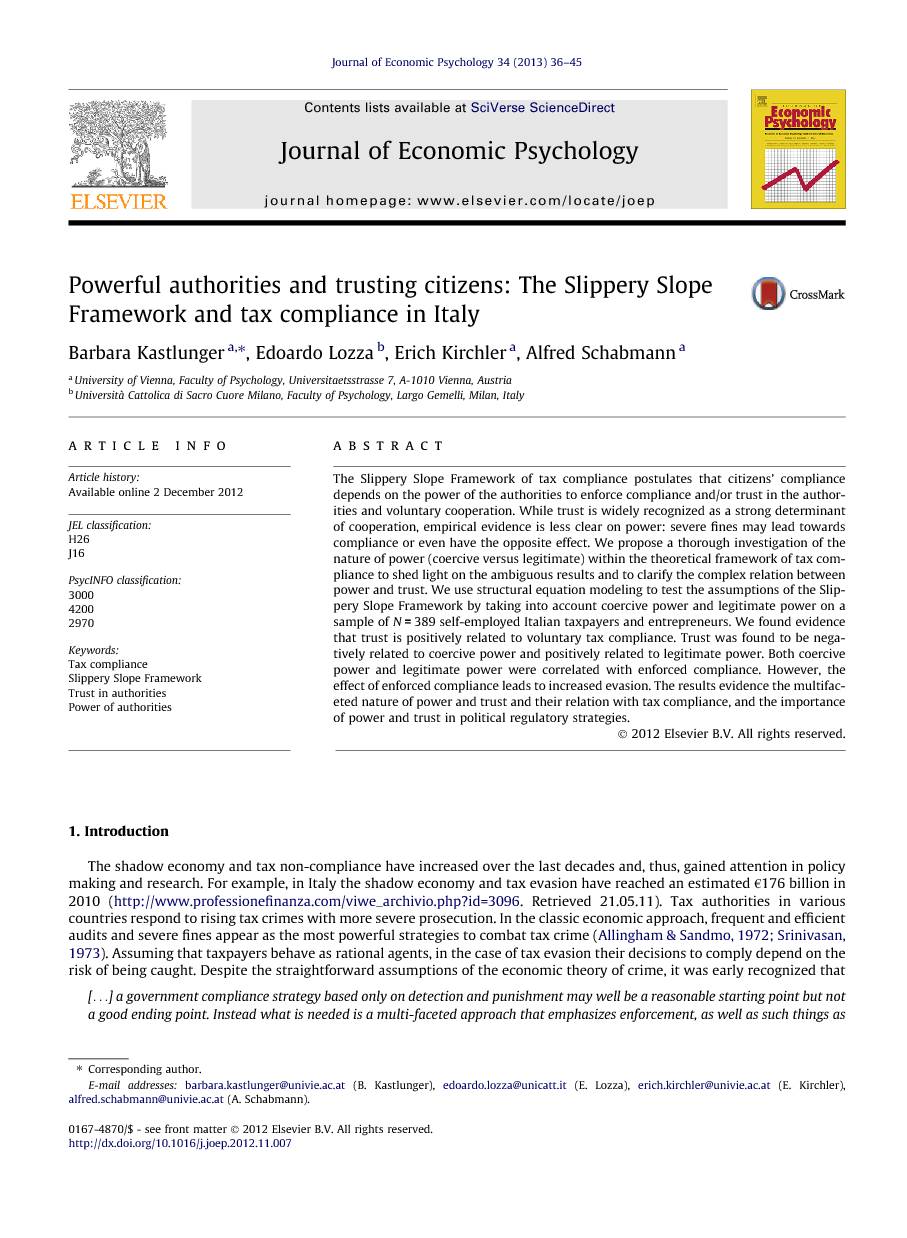 The Slippery Slope Framework of tax compliance postulates that citizens’ compliance depends on the power of the authorities to enforce compliance and/or trust in the authorities and voluntary cooperation. While trust is widely recognized as a strong determinant of cooperation, empirical evidence is less clear on power: severe fines may lead towards compliance or even have the opposite effect. We propose a thorough investigation of the nature of power (coercive versus legitimate) within the theoretical framework of tax compliance to shed light on the ambiguous results and to clarify the complex relation between power and trust. We use structural equation modeling to test the assumptions of the Slippery Slope Framework by taking into account coercive power and legitimate power on a sample of N = 389 self-employed Italian taxpayers and entrepreneurs. We found evidence that trust is positively related to voluntary tax compliance. Trust was found to be negatively related to coercive power and positively related to legitimate power. Both coercive power and legitimate power were correlated with enforced compliance. However, the effect of enforced compliance leads to increased evasion. The results evidence the multifaceted nature of power and trust and their relation with tax compliance, and the importance of power and trust in political regulatory strategies.

The aim of the present study was to test the Slippery Slope Framework (Kirchler, 2007 and Kirchler et al., 2008) by differentiating between two types of power (coercive and legitimate) on three Italian samples of taxpayers, living in the north, north-east, or south of the country. Data were collected in different Italian regions to account for the intra-national differences in tax compliance (Brosio et al., 2002). It was necessary to ensure that the respondents of the different regions had the same understanding of the translated scales and the newly developed items. Therefore, as a first step, measurement models were tested. Factor loadings did not strongly differ across the sub-samples, confirming the hypothesized invariant factorial structures per scale. Overall, the results of the multiple group analysis in AMOS indicated that the model fitted the data well. Trust enhanced voluntary tax compliance. Voluntary tax compliance itself was negatively related to tax evasion. According to the assumptions of the framework, coercive power affected enforced tax compliance. Voluntary compliance and enforced compliance, as well as trust and coercive power, were negatively related. Enriching existing empirical evidence on the Slippery Slope Framework (Muehlbacher and Kirchler, 2010 and Wahl et al., 2010), this study differentiated between coercive power and legitimate power (see Gangl et al., 2012 and Tyler, 2006). While coercive power was assessed as power to set punishment and to impose severe fines, legitimate power was assessed as the efficacy of the tax authorities’ interventions (due to its expertise and ability) in reducing tax crimes. According to the theoretical assumptions of Kirchler et al. (2008) coercive power was found to be negatively related to trust, while legitimate power was positively connected to trust in the authorities. However, both trust and coercive power were positively related with legitimate power. Legitimate power, in the sense of efficacy of crime reduction was therefore assumed to depend on trust and coercive power. If citizens trusted the authorities, they perceived effective authorities as strong and powerful. However, if citizens did not trust the authorities they perceived the same strength as coercive and enforcing. A counterintuitive result was the slight but significant positive influence of enforced compliance on tax evasion. The more taxpayers felt enforced to pay their taxes, the more they tried to evade. This assumption is explained by examining the scale Tax Evasion of the TAX-I in detail. The items assess tax evasion in strategic advantageous situations, i.e. in situations where the authorities do not exhibit their full power of surveillance. Therefore, the positive influence of enforced compliance on evasion seems quite plausible. When taxpayers feel observed and enforced they pay their taxes, whereas they will take advantage of the situation when they perceive a possibility to escape the law. Moreover, the positive relation between enforced compliance and evasion is not strong. Therefore, we suspect that there might be different strategies that taxpayers adopt. Some might be intimidated if they feel enforced and do not evade, while others feel defiant and due to reactance they evade even more (strategic taxpaying behavior, see for example Wahl et al., 2010). Literature witch threats tax compliance in Italy confirms that regional heterogeneities are relevant when studying tax compliance (Brosio et al., 2002 and Fiorio and Zanardi, 2007). Our results indicate that the structure of the model is valid across the regional sub-samples, which adds to the robustness of the framework. However, the structural similarity does not mean that tax compliance is similar across the regions in absolute terms: On the contrary, results observed across the considered regions (see Appendix B) are consistent with reported regional differences in Italy, where southern regions show higher levels of tax evasion and shadow economy. There might be differences in absolute levels of trust, perceived power and propensity to evade taxes between the regions, however, the interdependency of these factors and the structure of influences are similar. This strengthens also the claim of external validity of this model testing. The following step in research would be to test the Slippery Slope Framework also in other countries. Limitations of the study are given due to the fact that we assessed tax evasion by self descriptions in a survey presented online and as a paper version which on the other hand might lead to questionable validity of the results (Hessing, Elffers, & Weigel, 1988). However, the authors of the used questionnaire Kirchler and Wahl (2010) argue that by using a rather indirect technique, i.e. fictitious cases for assessing tax evasion, the problem of social desirability could be reduced (Suhling, Löbmann, & Greve, 2005). In that way respondents do fear less to reveal their criminal behavior. Furthermore, self reports are a well established method in empirical research on tax compliance (see for example Braithwaite, 2003) and self reports are seen as a proxy for behavior (Fishbein & Ajzen, 1975). However, we are confident on the value of these results because the different Italian regions under scrutiny have shown different propensity in tax cheating (i.e., the scores in the evasion scale of the TAX-I see Appendix B) and those differences are very coherent with tax evasion patterns reported by Italian authorities across regions. The present study assumes an applied psychological approach and is not interested in describing absolute levels of tax evasion. For this scope, comparison with behavioral data and a representative sample would be necessary. Moreover, this study is not aiming at analyzing cultural differences in tax evasion between different regions, but in studying relationships between the theoretically important variables in heterogeneous contexts. The fact that there are no structural differences between the regions corroborates the external validity of this study: despite the heterogeneity between the Italian regions in terms of tax evasion and shadow economy, the structural model and the relationships between power, trust and tax compliance are the same. Nevertheless, generalization of the results on different samples should be made with caution. Therefore, we recommend further testings in other countries, belonging to different socio-cultural contexts.