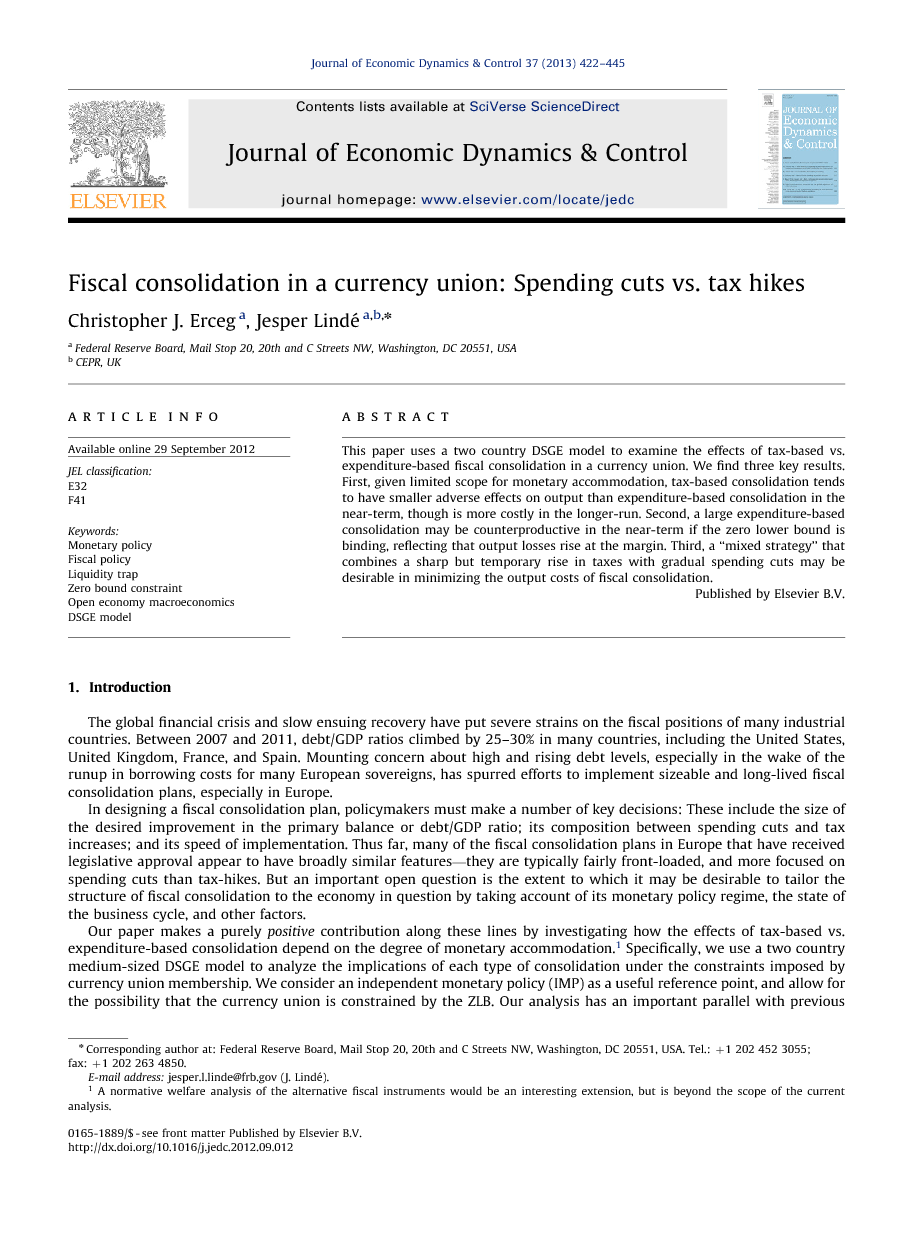 Our paper has focused on the implications of two particular types of fiscal consolidation strategies: namely, cutting government spending on goods and services vs. raising labor tax rates. Although spending-based consolidations have smaller output costs at all horizons if monetary policy can provide sizeable accommodation – as under an IMP – tax-based consolidations may involve considerably smaller output losses, at least for several years, when monetary policy is constrained by CU membership and the ZLB. The key practical implication is that the composition of fiscal consolidation should be designed to take account of constraints on monetary policy, including how policy actions both at home and abroad might influence those constraints (notably, through extending the duration of the liquidity trap faced by a CU). Thus, strategies that work well for (say) the United Kingdom in normal times might not be well-suited for France in an environment in which euro area monetary policy was constrained by the ZLB. Although we have focused on only two fiscal instruments to highlight the importance of monetary constraints for fiscal consolidation, actual consolidation programs deploy a wide array of fiscal adjustments on both the spending and tax side. The transmission of these alternative fiscal measures to the real economy may differ substantially from those we have considered, with potentially important consequences for the relative merits of spending vs. tax based consolidation. On the spending side, infrastructure spending presumably boosts the productivity of private capital, while spending on education enhances the longer-term productivity of the workforce. Accordingly, cuts in these areas would presumably have more adverse effects on the economy's longer-term potential output than in our framework which does not take account of these effects, and possibly weaken aggregate demand more even at shorter horizons. On the other hand, reducing certain types of transfers might have less adverse effects than the cuts we consider, particularly in the long-run. For example, a gradual tightening of eligibility requirements for unemployment benefits might well reduce the natural rate of unemployment in the long-run, and hence raise potential output.28 In future research, it would be desirable to extend our modeling framework to better capture the implications of a wider range of potential spending cuts, as well as conduct similar analysis on the tax side to consider the relative merits of labor, sales, and various types of capital taxes. Our analysis has analyzed fiscal consolidation in an environment of full information and perfect credibility, so that the public both understands and completely trusts that the government will adhere to its announced fiscal plans. However, strategies that work well under these assumptions may have less benign effects if the public doubts that policymakers will carry through with their strategies, particularly if the strategies rely on actions at relatively distant horizons. Indeed, the benefits of our mixed strategy of front-loaded tax hikes and deferred expenditure cuts relies on the public perceiving the former as temporary (hence limiting their adverse effects on potential output), and believing that the government will eventually make deep spending cuts. Clearly, it seems important to assess how these strategies would fare if the commitment were doubted to some extent (as in Debortoli and Nunes, forthcoming), or if the public took some time to learn about the strategy.29 Some other extensions of the basic modeling framework would also seem useful. First, the currency union as a whole is modeled as a closed economy; by extending our model to a three country framework, it would be possible to assess how open economy channels, including currency depreciation, might assuage the effects of fiscal consolidation. Second, given that rising sovereign spreads associated with deteriorating budget outlooks have spurred large-scale fiscal consolidation in a number of European economies, it would be useful to modify our framework so that sovereign spreads react endogenously to the future path of government debt.30 Third, because our model is solved under perfect foresight, we abstract from the effects of shock uncertainty on private sector behavior. It would interesting to examine the consequences of uncertainty - as is done by Adam and Billi (2008) - in a fully nonlinear framework. Finally, our model assumes that the government issues only one period nominal debt. Allowing for multiperiod nominal liabilities could have potentially important consequences for government debt evolution.