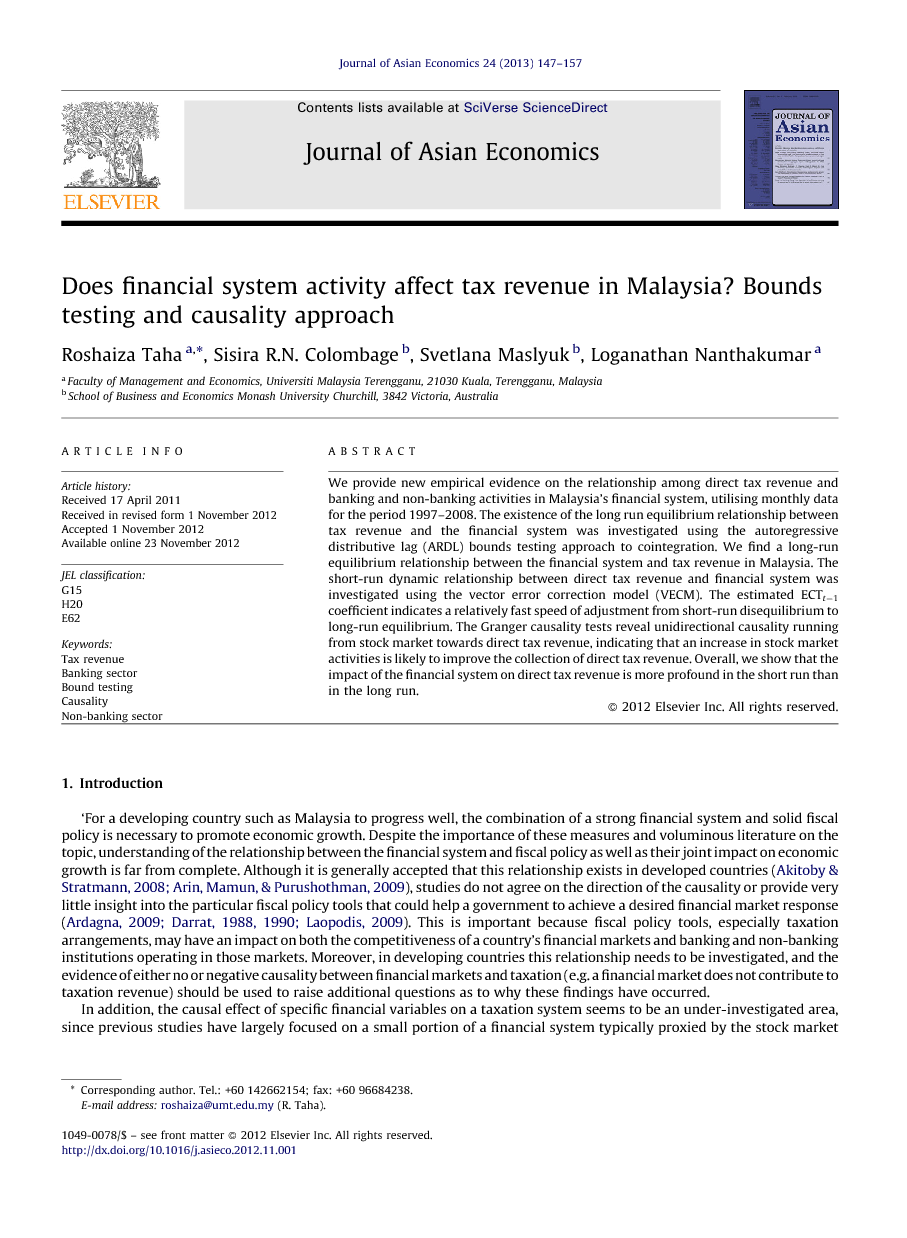 For a developing country such as Malaysia to progress well, the combination of a strong financial system and solid fiscal policy is necessary to promote economic growth. Despite the importance of these measures and voluminous literature on the topic, understanding of the relationship between the financial system and fiscal policy as well as their joint impact on economic growth is far from complete. Although it is generally accepted that this relationship exists in developed countries (Akitoby and Stratmann, 2008 and Arin et al., 2009), studies do not agree on the direction of the causality or provide very little insight into the particular fiscal policy tools that could help a government to achieve a desired financial market response (Ardagna, 2009, Darrat, 1988, Darrat, 1990 and Laopodis, 2009). This is important because fiscal policy tools, especially taxation arrangements, may have an impact on both the competitiveness of a country's financial markets and banking and non-banking institutions operating in those markets. Moreover, in developing countries this relationship needs to be investigated, and the evidence of either no or negative causality between financial markets and taxation (e.g. a financial market does not contribute to taxation revenue) should be used to raise additional questions as to why these findings have occurred. In addition, the causal effect of specific financial variables on a taxation system seems to be an under-investigated area, since previous studies have largely focused on a small portion of a financial system typically proxied by the stock market while neglecting the bonds market and banking sector activities. For instance, Bohn (1990), Demirguc-Kunt and Huizinga (2001), Tavares and Valkanov (2001), and Ardagna (2009), focus on either banking or non-banking activities in the financial system, but do not attempt to examine the impact of both types on tax revenue collection. The main purpose of this paper is to examine the short-run and long-run linkages between taxation (direct tax revenue) and the financial system (both banking and non-banking financial activities) in Malaysia as a developing country, utilizing monthly data for the period 1997–2008. The existence of the long run equilibrium relationship between tax revenue and the financial system was investigated using the autoregressive distributive lag (ARDL) bounds testing approach to cointegration, which can be used regardless of whether the underlying variables are integrated of different orders or fractionally integrated. The short-run dynamic relationship between direct tax revenue and financial system was investigated using the vector error correction model (VECM). This paper contributes to the literature on the relationship between taxation and the financial system in three ways. First, it focuses on a wide range of financial variables that represent both banking and non-banking financial activities. Second, to the best of our knowledge, this is the first paper to concurrently examine the relationship between tax and the financial system in developing Asia with particular attention to Malaysia. Third, unlike previous studies which examined the role of fiscal policy in Malaysia (e.g. the impact of tax rate changes on financial activities in that country), our aim is to investigate the effect of the financial system on the direct tax revenue collection, given that for the past two decades direct tax revenue has been the major contributor to government income in that country (Malaysia, 2008). Table 1 demonstrates that the share of direct tax revenue in the total government revenue increased from 39% in 1980 to more than 50% in 2008. The structure of this paper is as follows: Section 2 surveys the literature while Section 3 presents the data used in the study and discusses the empirical methodology. The findings are presented in Section 4. The paper concludes with a brief summary, followed by a discussion of the implications of our findings in Section 5.