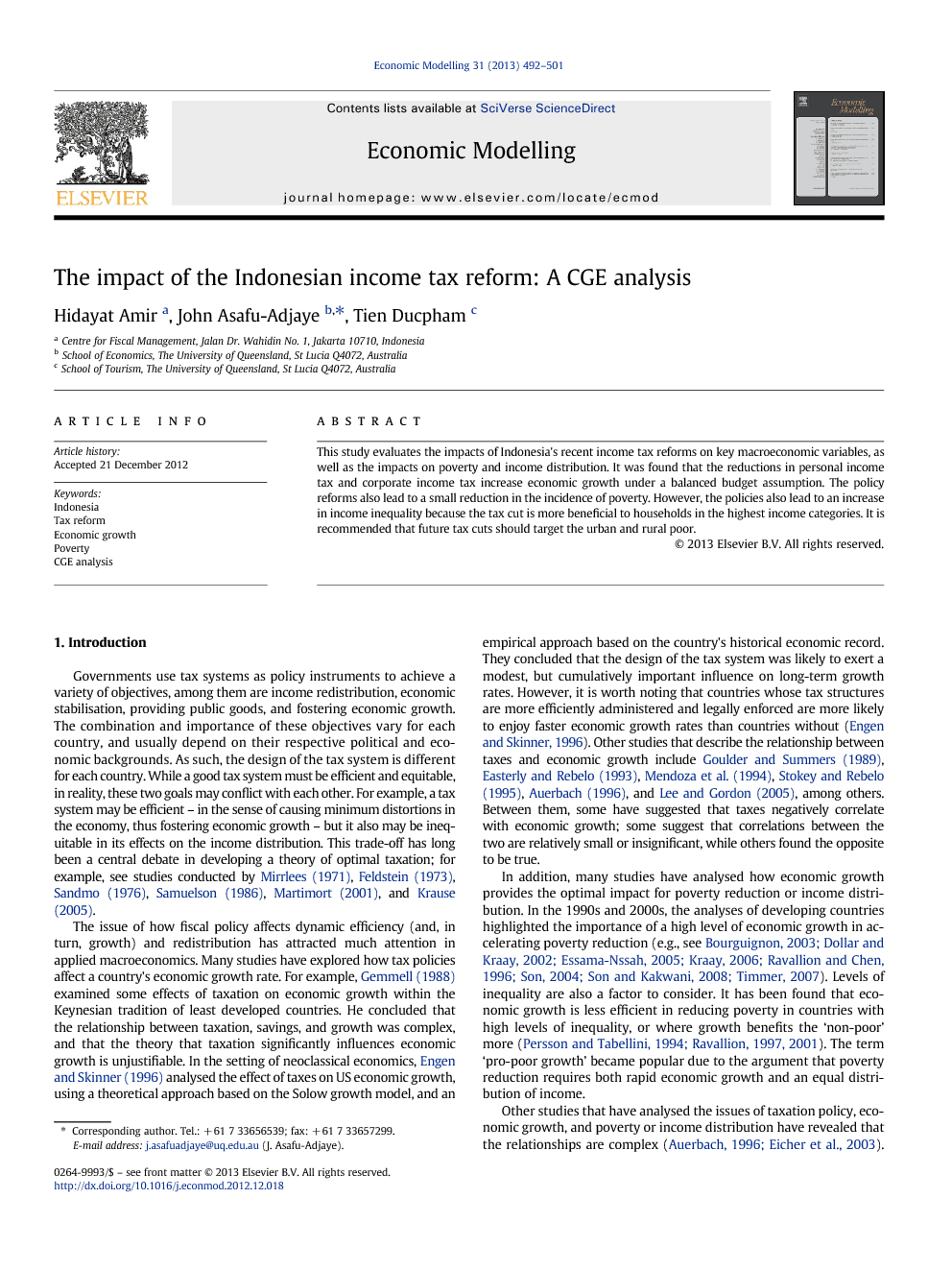 This study evaluates the impacts of Indonesia's recent income tax reforms on key macroeconomic variables, as well as the impacts on poverty and income distribution. It was found that the reductions in personal income tax and corporate income tax increase economic growth under a balanced budget assumption. The policy reforms also lead to a small reduction in the incidence of poverty. However, the policies also lead to an increase in income inequality because the tax cut is more beneficial to households in the highest income categories. It is recommended that future tax cuts should target the urban and rural poor.

Governments use tax systems as policy instruments to achieve a variety of objectives, among them are income redistribution, economic stabilisation, providing public goods, and fostering economic growth. The combination and importance of these objectives vary for each country, and usually depend on their respective political and economic backgrounds. As such, the design of the tax system is different for each country. While a good tax system must be efficient and equitable, in reality, these two goals may conflict with each other. For example, a tax system may be efficient – in the sense of causing minimum distortions in the economy, thus fostering economic growth – but it also may be inequitable in its effects on the income distribution. This trade-off has long been a central debate in developing a theory of optimal taxation; for example, see studies conducted by Mirrlees (1971), Feldstein (1973), Sandmo (1976), Samuelson (1986), Martimort (2001), and Krause (2005). The issue of how fiscal policy affects dynamic efficiency (and, in turn, growth) and redistribution has attracted much attention in applied macroeconomics. Many studies have explored how tax policies affect a country's economic growth rate. For example, Gemmell (1988) examined some effects of taxation on economic growth within the Keynesian tradition of least developed countries. He concluded that the relationship between taxation, savings, and growth was complex, and that the theory that taxation significantly influences economic growth is unjustifiable. In the setting of neoclassical economics, Engen and Skinner (1996) analysed the effect of taxes on US economic growth, using a theoretical approach based on the Solow growth model, and an empirical approach based on the country's historical economic record. They concluded that the design of the tax system was likely to exert a modest, but cumulatively important influence on long-term growth rates. However, it is worth noting that countries whose tax structures are more efficiently administered and legally enforced are more likely to enjoy faster economic growth rates than countries without (Engen and Skinner, 1996). Other studies that describe the relationship between taxes and economic growth include Goulder and Summers (1989), Easterly and Rebelo (1993), Mendoza et al. (1994), Stokey and Rebelo (1995), Auerbach (1996), and Lee and Gordon (2005), among others. Between them, some have suggested that taxes negatively correlate with economic growth; some suggest that correlations between the two are relatively small or insignificant, while others found the opposite to be true. In addition, many studies have analysed how economic growth provides the optimal impact for poverty reduction or income distribution. In the 1990s and 2000s, the analyses of developing countries highlighted the importance of a high level of economic growth in accelerating poverty reduction (e.g., see Bourguignon, 2003, Dollar and Kraay, 2002, Essama-Nssah, 2005, Kraay, 2006, Ravallion and Chen, 1996, Son, 2004, Son and Kakwani, 2008 and Timmer, 2007). Levels of inequality are also a factor to consider. It has been found that economic growth is less efficient in reducing poverty in countries with high levels of inequality, or where growth benefits the ‘non-poor’ more (Persson and Tabellini, 1994, Ravallion, 1997 and Ravallion, 2001). The term ‘pro-poor growth’ became popular due to the argument that poverty reduction requires both rapid economic growth and an equal distribution of income. Other studies that have analysed the issues of taxation policy, economic growth, and poverty or income distribution have revealed that the relationships are complex (Auerbach, 1996 and Eicher et al., 2003). Understanding the wider impact of taxation policy in a given economy is important, not only to strengthen basic theories but also to aid policy development on how to achieve a more efficient and equitable taxation system. Most of the studies that are based on optimal tax theory – beginning with the first study by Mirrlees (1971) – have taken a more theoretical approach that has often produced very little practical advice to inform policy-making (Sørensen, 2007). Many of the previous empirical studies have adopted partial equilibrium approaches that have failed to estimate the full impacts of taxation policy. There is therefore the need for a more comprehensive approach that takes into consideration the various inter-relationships between all actors in the economy, in order to more realistically estimate the economic effects and distributional consequences of any tax policy changes. In view of the foregoing, the main objective of this study is to identify and quantify the direction and magnitude of the effects of the Indonesian government's recent tax policy reforms on Indonesia's economy. More specifically, the study looks at the macroeconomic impacts of reducing the marginal tax rate on personal income tax (PIT) and the introduction of a flat tax rate on corporate income tax (CIT). The analysis will evaluate the impacts of tax policy reform at both the macro- and micro-levels. The former will include impacts on aggregate variables such as economic growth, employment, government revenue and so on. The latter will include sectoral impacts, impacts on household welfare, as well as income distribution. This study makes the following contribution to the existing literature. It is the first to use a CGE model to specifically analyse the modern taxation system in Indonesia. This is done by combining the latest national Input–Output (IO) table with a Social Accounting Matrix (SAM) to evaluate the impact of Indonesia's recent tax reforms at both the macro- and micro-levels. This information is supplemented with data from the National Socioeconomic Survey (Susenas) to provide a rich database that facilitates the analysis of the impacts of the tax policy on poverty and income distribution in Indonesia. The paper is structured as follows. After this Introduction, Section 2 presents a brief review of the 2008 income tax reform in the context of Indonesia's economic development. Section 3 offers a general description of the main features of our model highlighting the database construction, structure of production, final demand, composition of the institutions in the economy and the model. Section 4 describes the policy simulations and the magnitudes of the policy shocks, while Section 5 analyses the simulation results. Finally, Section 6 presents the conclusions and policy recommendations.

This paper has evaluated the effects of the Indonesian government's income tax reforms on the economy and the possible distributional effects on households. Three policy scenarios were simulated. The first was an adjustment in the personal income tax rate structure, the second was an application of a single rate to the corporate income tax rate, and the third was a combination of the two policies. The long-run simulations were conducted under two different assumptions, with and without a balanced budget condition. It was shown that although both policy changes (i.e. reduction in PIT and CIT) result in a reduction in tax revenue, they both have a positive impact on economic growth under the balanced budget assumption. The drivers of growth come mainly from an increase in real consumption, an overall increase in sectoral output and increase in exports due to lower production costs. Both policy changes reallocate employment from the excess labour industry (government services) to other industries. The contraction of the government sector occurs as a consequence of maintaining the balanced-budget condition. The excess labour in the government sector (which is highly labour-intensive) is absorbed by other industries at a lower wage. Because in the long run the economy is at full-employment, this results in an increase in efficiency in production, which in turn allows industries to produce more at a lower cost. The outputs of export-oriented commodities increase due to an increase in domestic and international demand. The increase in industrial output also leads to increased investment. The tax reform was shown to have positive impacts on households with a slight decrease in poverty incidence particularly under the balanced budget condition. On the other hand, there is a small increase in income inequality as shown in the higher post-simulation Gini Index. The relatively small impact on the poverty incidence and the small increase in income inequality are due to the fact that the tax policy is mostly beneficial to the households in the highest income groups. The study results pose a number of implications for reducing poverty and improving income inequality in Indonesia. Firstly, there is a need for future tax cuts to be targeted towards the urban and rural poor. This can be done through an exemption of commodity tax for the commodities that are heavily consumed by the poor or by increasing the income tax threshold from the current Rp1.5 million to Rp2 million. Secondly, there is a need for such efforts to be accompanied by complementary policies to reduce poverty in the short run. Such policies could include adjusting the level of the income threshold to protect poor households from paying more tax. In the short run, the government could consider direct cash transfers to poor households. However, in the longer term, a cash transfer policy is not appropriate as it could be treated merely as a government handout. A more sustainable approach to reducing poverty is for the government to accelerate its rural development policy. This should include providing better infrastructure in the agricultural sectors. Such an approach would be more effective in addressing poverty because the majority of the poor households live in the rural areas and work in the agricultural sectors. In conclusion, it is useful to consider the limitations of the study and ways in which it could be extended in future work. The 2008 Indonesian tax reform did not only involve adjusting the tax rates but also complemented with other policies such as modernization of the tax administration, simplification of the tax payment and reporting systems, and improving the capacity of tax officers. All of these measures were intended to increase the tax base and improve overall tax compliance. Our model did not attempt to incorporate the increased tax base and the improvement in tax compliance due to significant modelling challenges. However, this is something future research could address. Another limitation is that we developed a comparative static model in this study. Although useful for addressing “what if” policy questions, it would be desirable to develop a dynamic CGE model in the future to undertake more complex analysis. A dynamic model is able to give a better picture of how the impacts of policy changes evolve over time. For example, using such a model, it would be possible to evaluate more complex government policies such as a decision to invest and purchase capital that would contribute to capital accumulation and growth in the future.