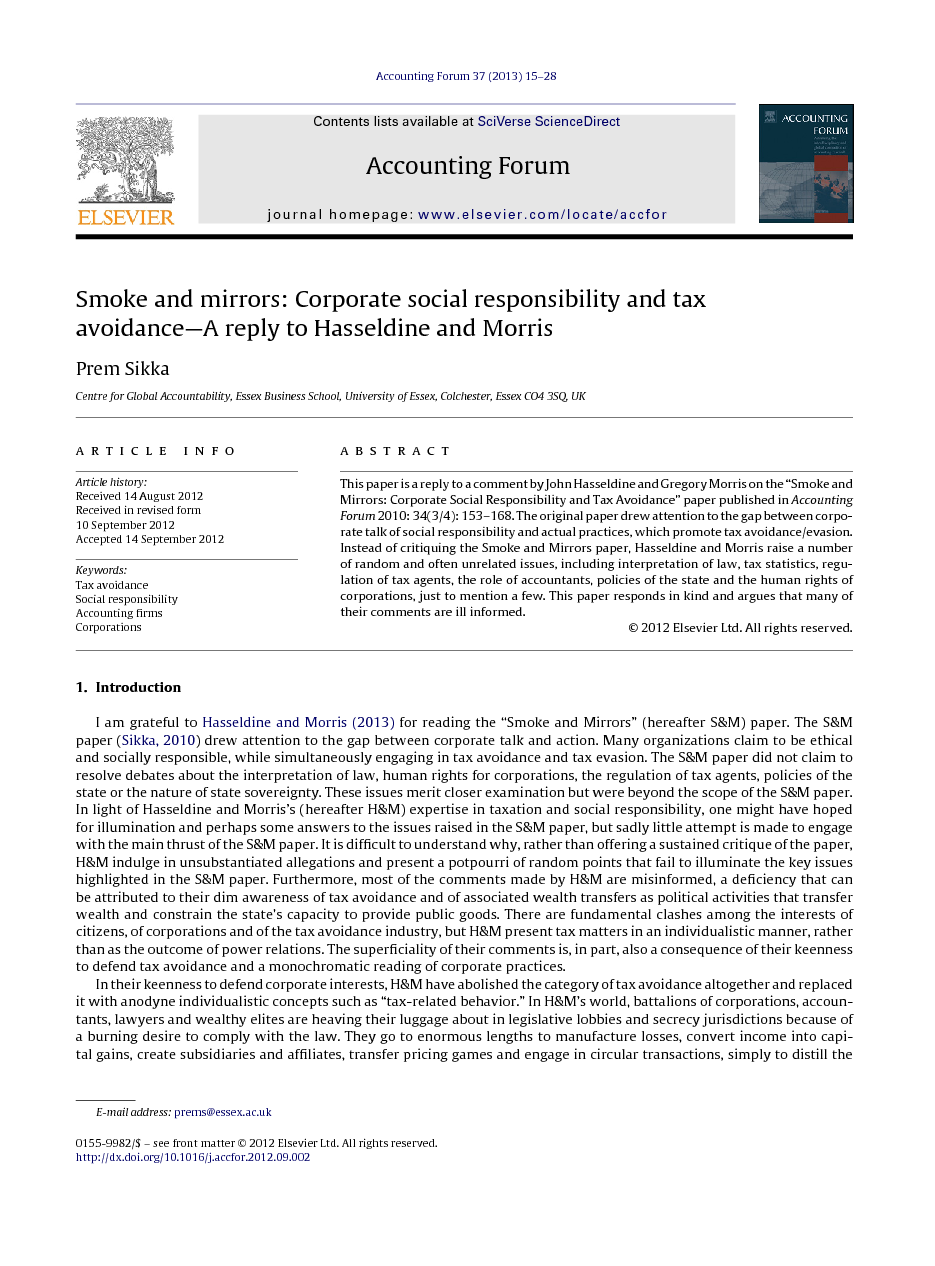 This paper is a reply to a comment by John Hasseldine and Gregory Morris on the “Smoke and Mirrors: Corporate Social Responsibility and Tax Avoidance” paper published in Accounting Forum 2010: 34(3/4): 153–168. The original paper drew attention to the gap between corporate talk of social responsibility and actual practices, which promote tax avoidance/evasion. Instead of critiquing the Smoke and Mirrors paper, Hasseldine and Morris raise a number of random and often unrelated issues, including interpretation of law, tax statistics, regulation of tax agents, the role of accountants, policies of the state and the human rights of corporations, just to mention a few. This paper responds in kind and argues that many of their comments are ill informed.

I am grateful to Hasseldine and Morris (2013) for reading the “Smoke and Mirrors” (hereafter S&M) paper. The S&M paper (Sikka, 2010) drew attention to the gap between corporate talk and action. Many organizations claim to be ethical and socially responsible, while simultaneously engaging in tax avoidance and tax evasion. The S&M paper did not claim to resolve debates about the interpretation of law, human rights for corporations, the regulation of tax agents, policies of the state or the nature of state sovereignty. These issues merit closer examination but were beyond the scope of the S&M paper. In light of Hasseldine and Morris's (hereafter H&M) expertise in taxation and social responsibility, one might have hoped for illumination and perhaps some answers to the issues raised in the S&M paper, but sadly little attempt is made to engage with the main thrust of the S&M paper. It is difficult to understand why, rather than offering a sustained critique of the paper, H&M indulge in unsubstantiated allegations and present a potpourri of random points that fail to illuminate the key issues highlighted in the S&M paper. Furthermore, most of the comments made by H&M are misinformed, a deficiency that can be attributed to their dim awareness of tax avoidance and of associated wealth transfers as political activities that transfer wealth and constrain the state's capacity to provide public goods. There are fundamental clashes among the interests of citizens, of corporations and of the tax avoidance industry, but H&M present tax matters in an individualistic manner, rather than as the outcome of power relations. The superficiality of their comments is, in part, also a consequence of their keenness to defend tax avoidance and a monochromatic reading of corporate practices. In their keenness to defend corporate interests, H&M have abolished the category of tax avoidance altogether and replaced it with anodyne individualistic concepts such as “tax-related behavior.” In H&M's world, battalions of corporations, accountants, lawyers and wealthy elites are heaving their luggage about in legislative lobbies and secrecy jurisdictions because of a burning desire to comply with the law. They go to enormous lengths to manufacture losses, convert income into capital gains, create subsidiaries and affiliates, transfer pricing games and engage in circular transactions, simply to distill the essence of the law and comply with the letter of the law. H&M have emptied the study of tax avoidance and corporate social responsibility of any concern with politics, power, social antagonisms, social justice, or intoxication with status and wealth, which are major features of contemporary social problems. H&M's formulations leave little room for the study of emerging wealth chains, the power of elites, the capture of the state and the politics of corporate social responsibility (CSR). Indeed, their preference is for silence and exile for anyone subscribing to alternative worldviews. Nonetheless, I am grateful to H&M because their comments provide an opportunity to clarify some of the issues about tax avoidance and CSR and to document the gulf between our approaches. The structure of this response is somewhat random, as it attempts to follow the points raised by H&M. This reply is organized into nine further sections. The first section revisits the S&M paper to provide a brief summary and background, so that the reader can have a better idea of the issues raised. The second section refers to H&M's objections that the S&M paper made use of non-peer-reviewed literature. The H&M worldviews are unacceptable because they result in silence and the marginalization of key debates. The third section responds to H&M's allegations that the S&M paper misreported tax avoidance statistics. It shows that their allegations have no substance. It shows that tax avoidance possibly occurs on a much larger scale and that H&M seem to have considerable difficulty seeing the corporate hand in tax avoidance schemes. The fourth section addresses H&M's claims about the significance of legal interpretations in taxation matters. Sadly, their edicts rest on a very narrow and individualistic conception of law, and they attach little weight to the role of social antagonisms in shaping law. The fifth section notes H&M's observations about the state and state sovereignty and does not find their pluralist conceptions very persuasive. As part of the overall defense of the tax avoidance industry, section six notes that H&M downplay the role of accounting firms in tax avoidance by portraying them as intermediaries, rather than as a fraction of capital that must constantly find novel ways to increase their profits. Their failure to locate accounting firms in any recognizable social formation prevents them from seeing the partisan role of firms. The seventh section comments on H&M's observations about the regulation of tax avoidance and notes that their poor awareness of politics and of the capture of the state prevents a meaningful analysis. In line with their stream of random points, H&M invoke human rights for corporations. Therefore, the eighth section briefly presents counterarguments. Section nine concludes the paper by drawing together the major differences between their assumptions and the emerging critical literature.

In his 2012 budget speech, UK Chancellor George Osborne described “tax evasion and aggressive tax avoidance as morally repugnant.”30 The erosion of tax revenues is also a major cause of the deepening economic crisis and has constrained the government's ability to intervene in the economy. It has formed the basis of austerity programs that are inflicting misery on millions of people (Christian-Aid, 2008, Mitchell and Sikka, 2011 and Shaxson, 2011). Judging by recent press coverage, there appears to be a heightened social awareness of the corrosive impact of tax avoidance. In contrast, H&M's paper is an example of an emerging strand of literature that downgrades tax avoidance altogether by neglecting social conflict, class, ideology, the capture of the state and concerns for social justice and fairness (see also Gracia & Oats, 2012). The main thrust of the S&M paper was that corporations soothe public anxieties by publishing corporate social responsibility (CSR) reports and by making promises of good citizenship, but these actions do not always match their tax practices. In many ways, this exchange has been frustrating, as H&M have failed to critique the S&M paper. Instead, they offered a potpourri of random unrelated points rarely grounded in any explicit theory, evidence or analysis. They failed to locate their points in any social theory or conception of society, the state, conflict, continuity and change. This failure has enabled them to mount a defense of the tax avoidance industry and to abolish the conceptual category of tax avoidance altogether. Their main argument appears to be that I should have written a different paper, covered different issues, or supported their ideological preferences. Instead of focusing on organizational hypocrisy, they believe that I should have written about law, the regulation of tax agents, state policy on tax disclosures, tax preparers and corporate human rights, just to mention a few topics. All of these issues might well be worthy of study, but they were beyond the scope of the Smoke and Mirrors (S&M) paper. H&M themselves could have written one or more papers on those issues, but they have chosen not to. H&M have said that there are insufficient examples (p. 2) in the S&M paper to justify its conclusions. In common with other defenders of the status quo, H&M place critics in negative spaces. Their critique is easily declared to be “unconvincing” (p. 2), while little evidence, theory or analysis is apparently needed to support the status quo. H&M fail to cite even one example of a company whose tax practices accord with its claims of ethical conduct or CSR statements. Clearly, there are major differences between H&M's perspective and a critical approach to studying tax avoidance/evasion. These differences are summarized in Table 1, and it is appropriate to conclude with a brief commentary.