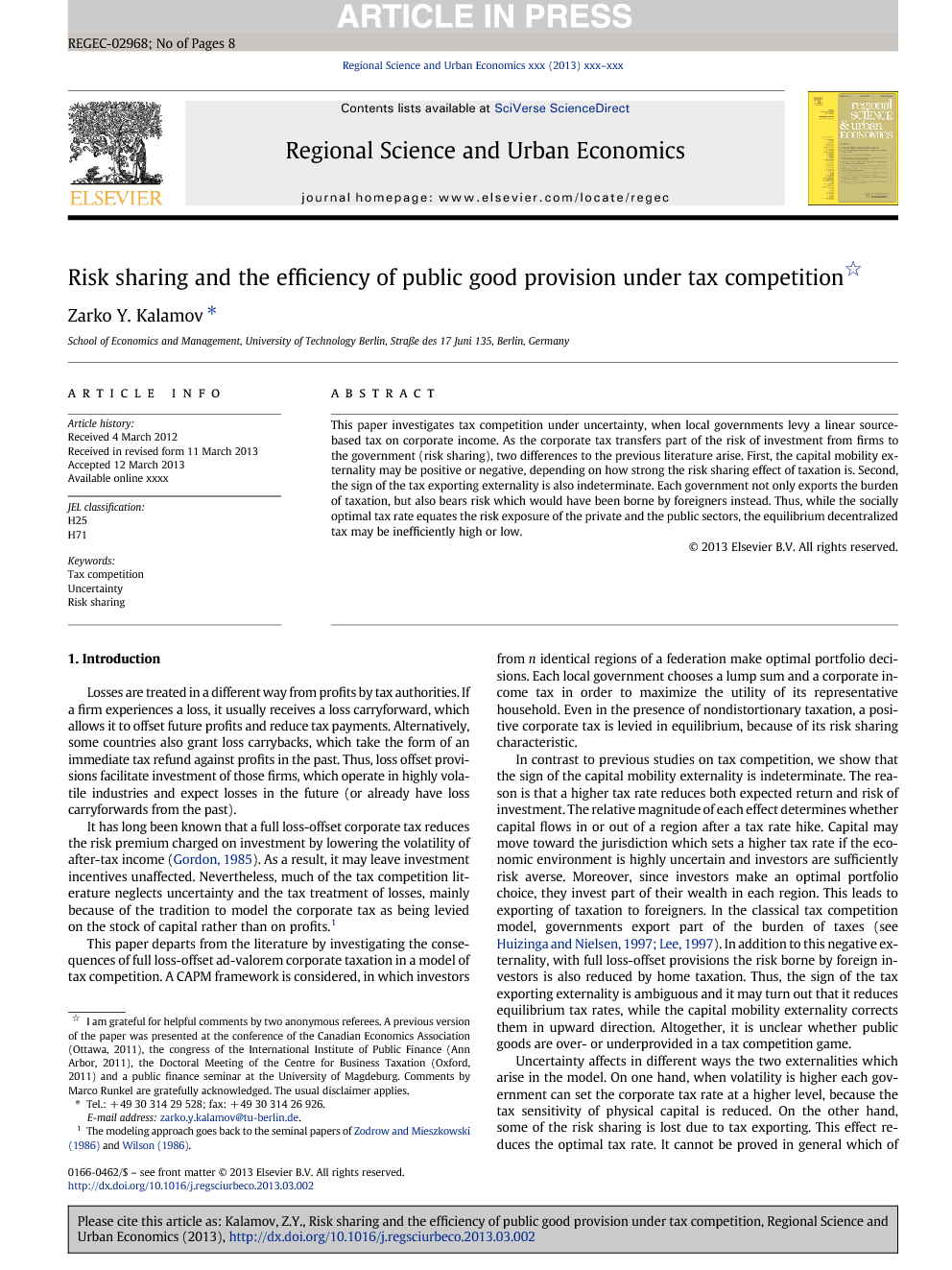 This paper investigates tax competition under uncertainty, when local governments levy a linear source-based tax on corporate income. As the corporate tax transfers part of the risk of investment from firms to the government (risk sharing), two differences to the previous literature arise. First, the capital mobility externality may be positive or negative, depending on how strong the risk sharing effect of taxation is. Second, the sign of the tax exporting externality is also indeterminate. Each government not only exports the burden of taxation, but also bears risk which would have been borne by foreigners instead. Thus, while the socially optimal tax rate equates the risk exposure of the private and the public sectors, the equilibrium decentralized tax may be inefficiently high or low.

This paper has shown that introducing uncertainty to the standard tax competition model can have many implications. First, due to the transfer of risk through loss-offset provisions, real investment may be attracted to a jurisdiction with higher corporate taxation. This means that the capital mobility externality may be negative. Second, because of the stochastic shocks, investors diversify their portfolios. This leads to joint ownership of firms and exporting of the tax burden. This paper contributes to the tax exporting literature by showing that the government reduces the uncertainty of capital income, which accrues to foreigners. Thus, the tax exporting externality is also with an ambiguous sign. As a result, it is undetermined whether tax competition leads to a “race-to-the-bottom” under uncertainty. The above ambiguity vanishes when the number of regions is large. In this case investors are able to fully diversify their portfolios and the externalities have their expected signs. Even though the large n case may be more realistic, full diversification is not observed in practice. Pischke (1995) estimates idiosyncratic shocks to be about 6.5 times more volatile than aggregate volatility. As a result, nondiversifiable risk can push the price of risk significantly above zero even when there are many regions. This case may arise for small firms, which are usually owned by undiversified entrepreneurs. It may also apply for countries with less developed capital markets. Furthermore, the small n case may be empirically relevant for subnational regions, which operate under an economic regime of strict national-level capital controls.17 Thus, the sensitivity of the results to the number of regions may provide predictions about tax competition before and after capital-market liberalization. Therefore, the results of the paper cannot be interpreted as showing that the basic tax competition predictions break down in the presence of uncertainty. Nevertheless, they indicate that the usual assumptions of perfect capital markets and no uncertainty may overestimate the arising externalities. Moreover, changes in the degree of nondiversifiable risk or the perception of risk by capital markets affect both the socially optimal and the decentralized corporate tax rates. Future research may explicitly consider nondiversifiable risk, e.g. by including nontradable equity, in a tax competition framework. The risk sharing role for corporate taxation should depend positively on the proportion of nontradable equity held by the resident of each region. The results of this article rely also upon the assumption of full loss-offset provisions. Even though the existing rules constrain the use of carrybacks and carryforwards, there is recent empirical evidence that the responsiveness of investment to corporate taxation can be significantly reduced by existing carryforwards (Dreßler and Overesch, forthcoming). An interesting issue is whether it is beneficial for governments to react to tax competition by reducing the statutory tax rate or by relaxing loss-offset provisions. Both of these measures may reduce tax revenues of the government. The advantage of a lower tax rate is that it discourages profit shifting by multinational enterprises. On the other side, it reduces the transfer of risk. Alternatively, a relaxation of loss-offset rules increases the transfer of risk, but some of it will accrue to foreign owners of domestic capital through tax exporting. Additionally, it may enable the government to charge a higher tax rate. Furthermore, transferring risk from the private to the public sector may not be desired by governments, if they do not want to increase the variability of tax revenues. Even though governments are usually not credit constrained and are able to smooth their expenditures over time, tax codes of most countries try to avoid the possibility of large negative shocks to revenues. Additional research is required to determine how governments deal with the issues which arise from the risk transfer. An extension of the model to incorporate international profit shifting by multinational firms is desirable. Hong and Smart (2010) show that international tax planning activities reduce the tax rate sensitivity of investment and this effect may dominate the tax erosion effect. As a result, profit shifting may lead to higher tax rates. Future research may investigate whether this result holds under uncertainty when the tax sensitivity of capital is already reduced by loss-offset provisions. Moreover, relaxing loss-offset rules may be used as a tax competition instrument to attract mobile profits, since a firm needs to report profits in order to use its loss carryforwards. Additionally, the paper cannot determine an unambiguous relationship between uncertainty and the corporate tax rate. The reason is that volatility affects in opposite ways the externalities, which arise in the model. However, it complements the previous results of Panteghini and Schjelderup (2006), Panteghini (2009) and Köthenbürger and Lockwood (2010). Thus, while there are many different links between volatility and corporate taxation in a tax competition setting, furth