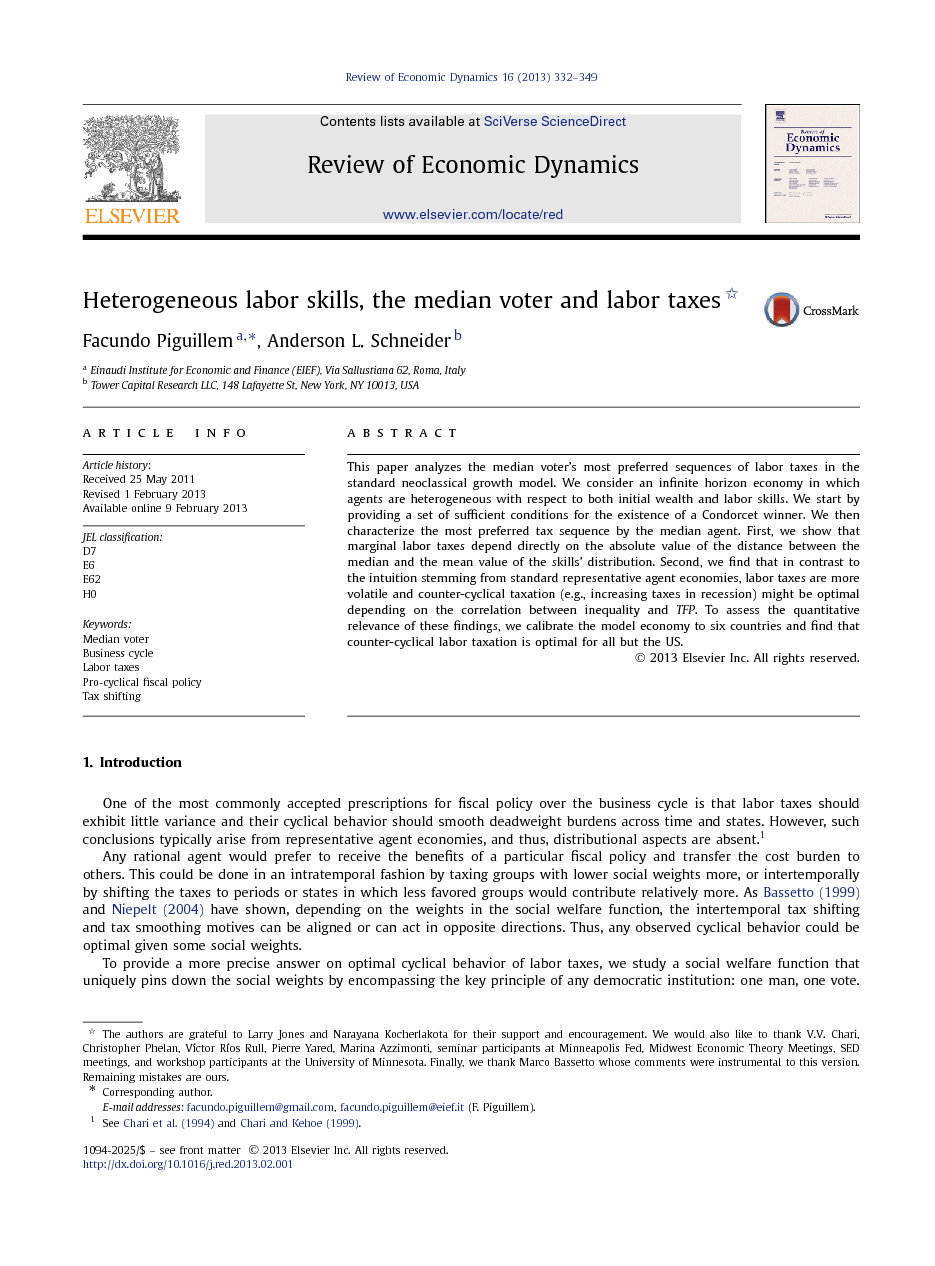 This paper analyzes the median voterʼs most preferred sequences of labor taxes in the standard neoclassical growth model. We consider an infinite horizon economy in which agents are heterogeneous with respect to both initial wealth and labor skills. We start by providing a set of sufficient conditions for the existence of a Condorcet winner. We then characterize the most preferred tax sequence by the median agent. First, we show that marginal labor taxes depend directly on the absolute value of the distance between the median and the mean value of the skillsʼ distribution. Second, we find that in contrast to the intuition stemming from standard representative agent economies, labor taxes are more volatile and counter-cyclical taxation (e.g., increasing taxes in recession) might be optimal depending on the correlation between inequality and TFP. To assess the quantitative relevance of these findings, we calibrate the model economy to six countries and find that counter-cyclical labor taxation is optimal for all but the US.

We view the results regarding labor taxes as a neat characterization of an important component of fiscal policy. Most studies analyzing inefficiencies due to political constraints have followed the route of making strong ex ante assumptions about the institutional environment (e.g. specific game theoretic models of voting over a restricted set of tax instruments). This makes it hard to interpret the results since it is not clear whether the properties of the policies singled out as equilibria are chosen due to the institutional arrangements or are due to the assumed frictions. Allowing for the possibility of heterogeneous agents may drastically change the intuition drawn from environments with a representative agent. It could also render the need for additional frictions to explain particular features of the data unnecessary. The fact that pro-cyclical fiscal policy can be optimal with only heterogeneity and without any additional imperfections illustrates this point. When skills evolve stochastically over time, a temporary increase in inequality could imply either higher or lower labor taxes, depending on both the sign and magnitude of the correlation between inequality and aggregate productivity. On the one hand, if recessions generate a sufficiently large increase in labor income inequality, it could be optimal to shift the burden of taxation to those periods. On the other hand, if the increase in inequality is small, it could be optimal to decrease taxes to smooth inefficiencies. We show that both possibilities are empirically plausible, but that the intertemporal tax shifting motive seems to be dominant in our sample. This motive, which is often overlooked in the literature, could drastically change some normative prescriptions about fiscal policy. Finally, our findings might be useful for dealing with other kinds of problems in dynamic economies. As is clear from Section 4, the existence of a Condorcet winner is a consequence of the single Crossing Property. From this point of view, we provide a set of sufficient conditions under which the latter holds. For instance, the Single Crossing Property could be used in environments in which voting occurs sequentially, or in economies in which agents decide over objects other than income taxes.