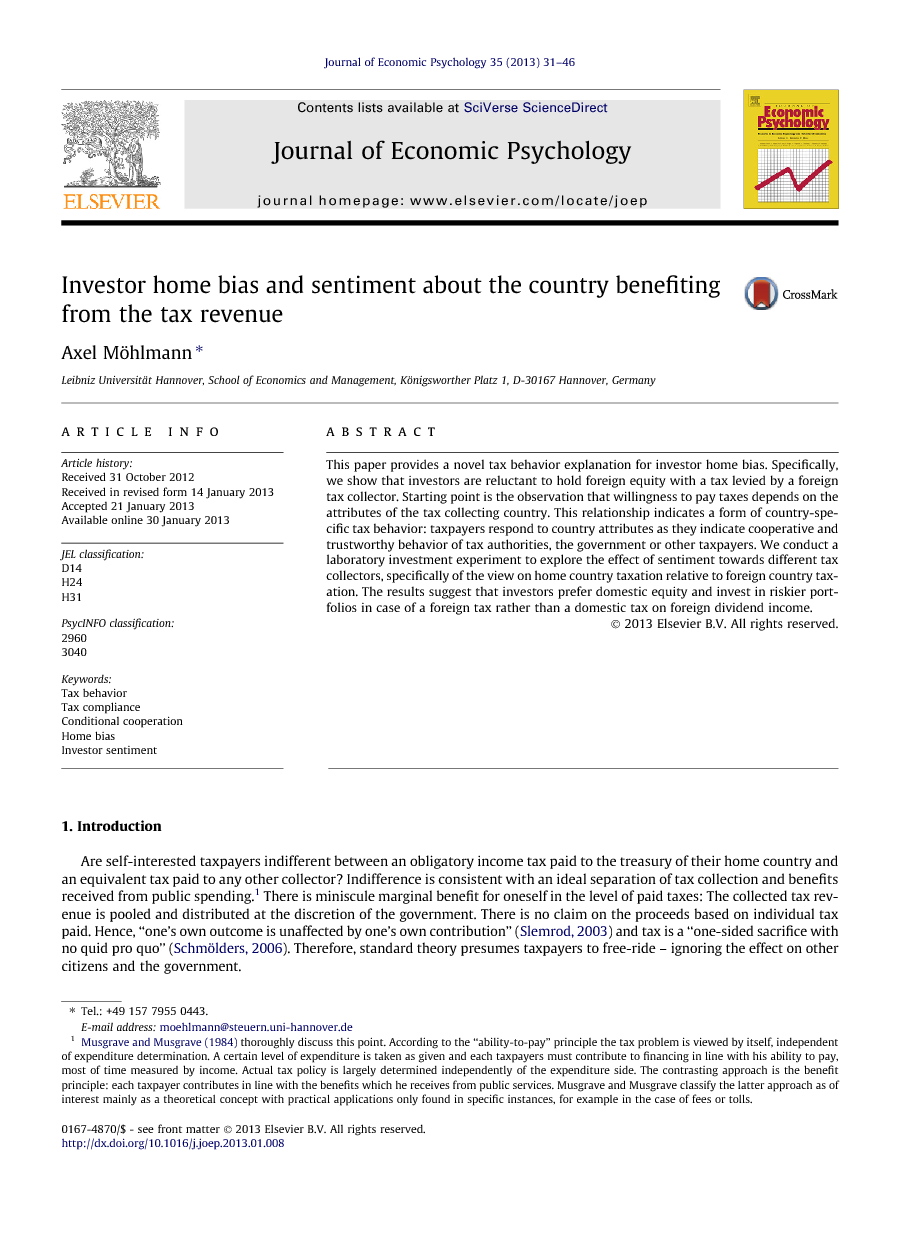 This paper provides a novel tax behavior explanation for investor home bias. Specifically, we show that investors are reluctant to hold foreign equity with a tax levied by a foreign tax collector. Starting point is the observation that willingness to pay taxes depends on the attributes of the tax collecting country. This relationship indicates a form of country-specific tax behavior: taxpayers respond to country attributes as they indicate cooperative and trustworthy behavior of tax authorities, the government or other taxpayers. We conduct a laboratory investment experiment to explore the effect of sentiment towards different tax collectors, specifically of the view on home country taxation relative to foreign country taxation. The results suggest that investors prefer domestic equity and invest in riskier portfolios in case of a foreign tax rather than a domestic tax on foreign dividend income.

Are self-interested taxpayers indifferent between an obligatory income tax paid to the treasury of their home country and an equivalent tax paid to any other collector? Indifference is consistent with an ideal separation of tax collection and benefits received from public spending.1 There is miniscule marginal benefit for oneself in the level of paid taxes: The collected tax revenue is pooled and distributed at the discretion of the government. There is no claim on the proceeds based on individual tax paid. Hence, “one’s own outcome is unaffected by one’s own contribution” (Slemrod, 2003) and tax is a “one-sided sacrifice with no quid pro quo” (Schmölders, 2006). Therefore, standard theory presumes taxpayers to free-ride – ignoring the effect on other citizens and the government. Despite the preceding reasoning, individual willingness to pay taxes depends on the characteristics of the tax-collecting government (McCaffery & Slemrod, 2006 and Slemrod, 2007). Observed tax behavior suggests a form of conditional cooperation: Individuals are willing to pay taxes honestly as long as others do the same and the government uses the tax revenue in the best interest of the citizens. Along this line trust in the tax authorities has an important role for tax compliance (Kirchler, Hoelzl, & Wahl, 2008). Just as indifference, conditional cooperation in a trustful relationship can represent self-interested behavior: It reflects a cooperative strategy in a repeated game to ensure future cooperation of others. Whereas previous research on sentiment about the tax-collecting government focuses on tax compliance – the decision to report taxes honestly vs. tax underreporting – this paper studies a choice between different beneficiaries of the tax revenue of an obligatory tax. To our knowledge, we are the first to contribute an analysis of a decision in which the tax payment itself is obligatory and exogenous but there is a choice on tax revenue recipients. This approach permits us to draw novel conclusions on the consequences of tax behavior. Namely, we provide a tax behavior explanation for the puzzle of equity home bias – the observation that investors prefer to hold domestic equity (Lewis, 1999). Previous tax-based explanations of home bias focus on the avoidance of securities of tax-disfavored countries (Chan et al., 2005, Desai and Dharmapala, 2011 and Mishra and Ratti, 2013), while we study equivalent tax burdens but variation of tax collectors. The investigated decision context is an allocation of portfolio investments to either domestic or foreign securities. Experimentally, we implement a variation of governments that collect taxes on foreign dividend income. In practice, many countries impose a withholding tax on income from financial assets paid to nonresidents. In case of double taxation (foreign withholding and domestic income tax), tax credits or exemptions often apply. In the case of a full credit or exemption, the tax burden between domestic and foreign equity is identical and taxes on foreign financial income are exclusively paid to a foreign tax collector. Building on insights of tax compliance research on the role of trust in tax authorities and the government and conditional cooperation we hypothesize that investors are concerned about the country benefiting from a tax. Based on this sentiment they potentially prefer taxes paid to the local treasury to taxes paid to foreign treasuries. Exploiting the experimental variation allows us to test whether investors invest more in domestic securities in case of a foreign tax on foreign dividend income than in case of a domestic tax on foreign dividend income. Based on the experimental variation one can distinguish the effect of sentiment about tax collector countries from other explanations of favoring domestic or foreign securities. Further, we examine whether investors invest in riskier portfolios in case of a domestic tax on foreign dividend income. The idea is that sentiment about the country collecting a tax potentially affects the perceived familiarity of an investment opportunity. This will change investors’ risk preferences with a negative correlation between familiarity and perceived investment risk (Benartzi, 2001 and Weber et al., 2005). Experimentally, we find evidence supporting the concept that investors account for the country benefiting from a tax, which affects international portfolio choices involving taxes. Subjects are willing to support the fiscal authorities of their home country. Moreover, the country benefiting from a tax affects the observed choices of portfolio risks. In line with a multiple attribute choice, risk and return consideration as well as tax collector countries influence the portfolio decision. The paper proceeds as follows. The next section discusses related taxation and finance literature. Section 3 investigates the cross-country association between seeing taxpaying as the duty of a good citizen and equity home bias. Section 4 formulates our research hypotheses and describes a lab experiment conducted to test these hypotheses. The last section concludes.

This paper investigates whether sentiment about a country benefiting from the tax revenue affects tax behavior and investment decisions. Cross-country comparison suggests a link between seeing tax-paying as the duty of a good citizen and the share of domestic securities hold. Experimentally, between-subject variation of tax collector countries affects investor home bias and portfolio risk. This provides evidence that taxpayers are not indifferent between an obligatory income tax paid to the treasury of their home country and an equivalent tax paid to a foreign tax collector. The results contribute to previous evidence that country-specific sentiments affect behavior of private investors. The identified effect suggests that tax behavior at least partly reflects conditional cooperation and highlights the importance of trust between taxpayers and tax authorities. Further, the finding contributes a novel tax behavior explanation for the investor home bias puzzle. We also provide new evidence of a tax collector country effect on perceived investment risk. The result of an effect of country-specific sentiment and tax behavior combined with previous evidence that investors avoid equity from tax-disfavored countries suggest a role of tax factors in explaining international portfolio decisions – in addition to various plausible non-tax factors. There are important implications for tax policies: Granting a domestic tax relief or a domestic tax credit to foreign equity income may result in equivalent tax burdens of domestic and foreign equity but for private investors it may still not remove completely the tax-specific reluctance to invest in foreign equity. A reduction of foreign withholding taxes would ease this reluctance. However, there is a trade-off due to common evasion of home country taxes on foreign equity income (Desai & Dharmapala, 2011). This study can be interpreted as an analysis of country-specific sentiment with respect to tax revenue beneficiaries – domestic or foreign treasuries – in the specific context of an international portfolio decision. The purpose of this design is to investigate whether country-specific sentiment affects international portfolio choices through taxes. It is also possible to analyze more directly whether individuals account for income of different treasuries. For example, one could implement an experimental design in which subjects have a direct choice on a donation beneficiary of an exogenous amount of money – without any attached choice. In addition, it would be useful to study the effect of tax collector countries attached to different types of economic decisions, such as labor supply and consumption decisions. Moreover, one could presumably observe the same tax behavior effect, if a tax was levied on the corporate level rather than the individual level. Investors cannot directly influence the taxable profits of corporations, but they can express a preference for local tax revenue by holding more local stocks. As in many jurisdictions municipalities levy capital based taxes on local corporate sites, this is a potential explanation for the observed preference for locally headquartered firms, the so-called local bias (e.g. Jacobs & Weber, 2012). It would be helpful to replicate the same experiment in a different context to investigate whether the results are robust to differences in cultures and attitudes of subjects. The cross-cultural generalizability can be assessed along at least five dimensions: First, one could analyze subjects with a different degree of social identity: for example subjects of a minority. Second, it would be interesting to differentiate between countries with a low level of patriotism – which includes Germany – and countries with a high level of patriotism such as the USA or Ireland (see Shayo (2009) for details on differences in national identity between countries). Third, the results potentially depend on the public economic conditions. A study of subjects in a country suffering from an economic crisis may yield different results than a study in a country with solid economic growth. Fourth, the effect may depend on the regional social acceptance of tax evasion behavior. Finally, one could analyze whether the result is robust to the choice set, in particular by considering a type of countries seen in less positive light by the public opinion. Such an attempt could study the portfolio choice between assets from ethical and unethical countries, similar to previous studies analyzing the choice between ethical and unethical companies.