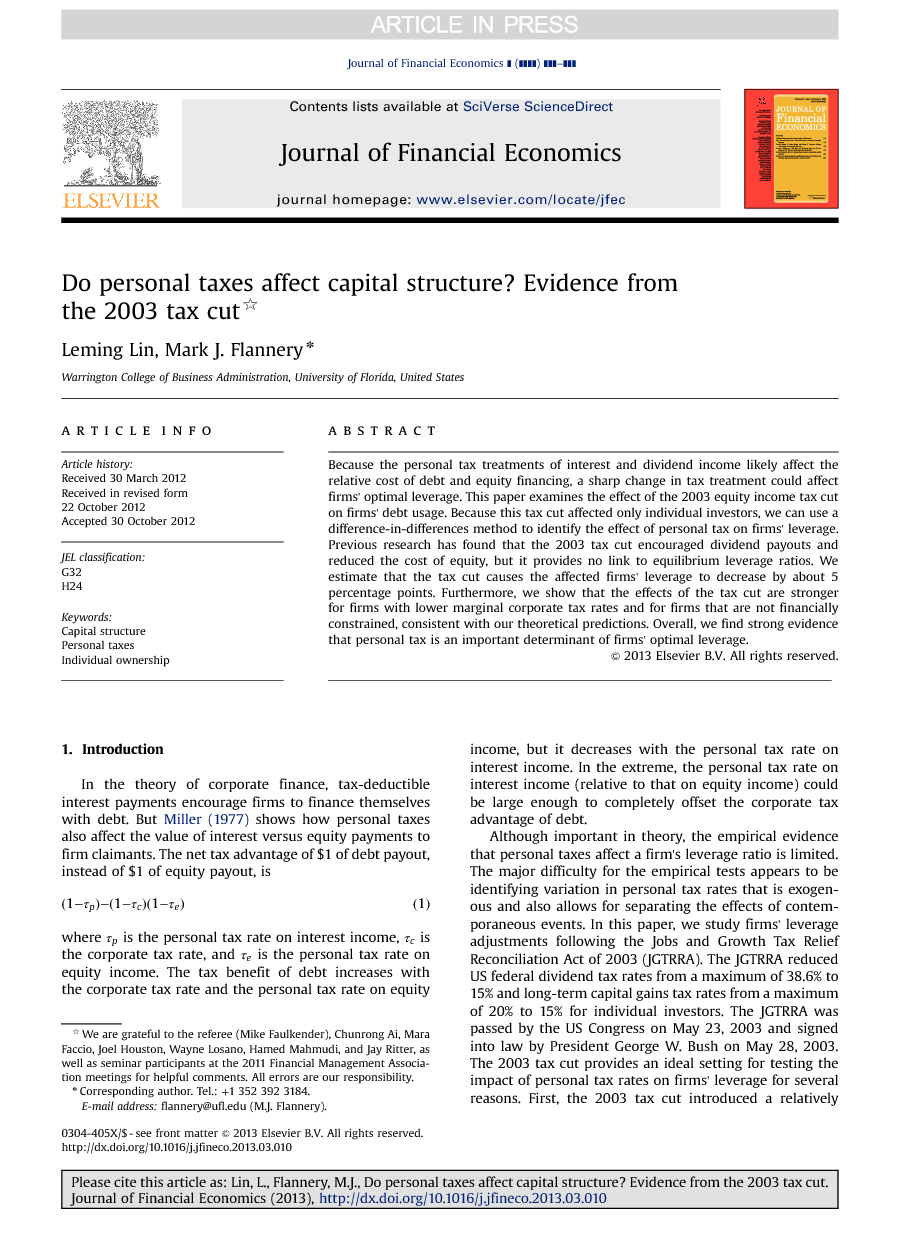 Because the personal tax treatments of interest and dividend income likely affect the relative cost of debt and equity financing, a sharp change in tax treatment could affect firms' optimal leverage. This paper examines the effect of the 2003 equity income tax cut on firms' debt usage. Because this tax cut affected only individual investors, we can use a difference-in-differences method to identify the effect of personal tax on firms' leverage. Previous research has found that the 2003 tax cut encouraged dividend payouts and reduced the cost of equity, but it provides no link to equilibrium leverage ratios. We estimate that the tax cut causes the affected firms' leverage to decrease by about 5 percentage points. Furthermore, we show that the effects of the tax cut are stronger for firms with lower marginal corporate tax rates and for firms that are not financially constrained, consistent with our theoretical predictions. Overall, we find strong evidence that personal tax is an important determinant of firms' optimal leverage.

The Jobs and Growth Tax Relief Reconciliation Act of 2003 substantially reduced the personal tax rates on dividends and capital gains while leaving the tax rate on interest income unchanged. This event, therefore, provides a clean setting to test the effect of personal taxes on the cost of equity and optimal capital structure. Using a difference-in-differences method, we estimate that the 2003 tax cut reduced affected firms' book leverage by about 5 percentage points on average. Because the tax cut applied only to individual investors, its effect depended on each firm's marginal investor's type. We use the firm's individual ownership to proxy for the probability that the marginal investor is an individual and, thus, the firm is affected by the tax cut. The advantage of this method is that it mitigates any confounding change in firms' leverage in 2003 and enables us to interpret the results as causal effects instead of simple correlation. The limitation of this method is that individual ownership is not a perfect identification variable. By repeating our regressions in years with no tax change, we attempt to exclude alternative explanations and the possibility of spurious relations. We also use firms' abnormal returns in two event windows in early 2003 as an alternative proxy for the treatment status of firms in 2003. We find that firms with high positive abnormal returns (those we classify as treated firms) reduce their leverage significantly more than firms with low or negative returns. Finally, providing further evidence for the causal explanation of the tax cut, we show that the effects of the tax cut are stronger for firms with lower marginal corporate tax rates and for firms that have worse capital market access. Overall, we find strong evidence that personal tax is an important determinant of firms' optimal leverage.