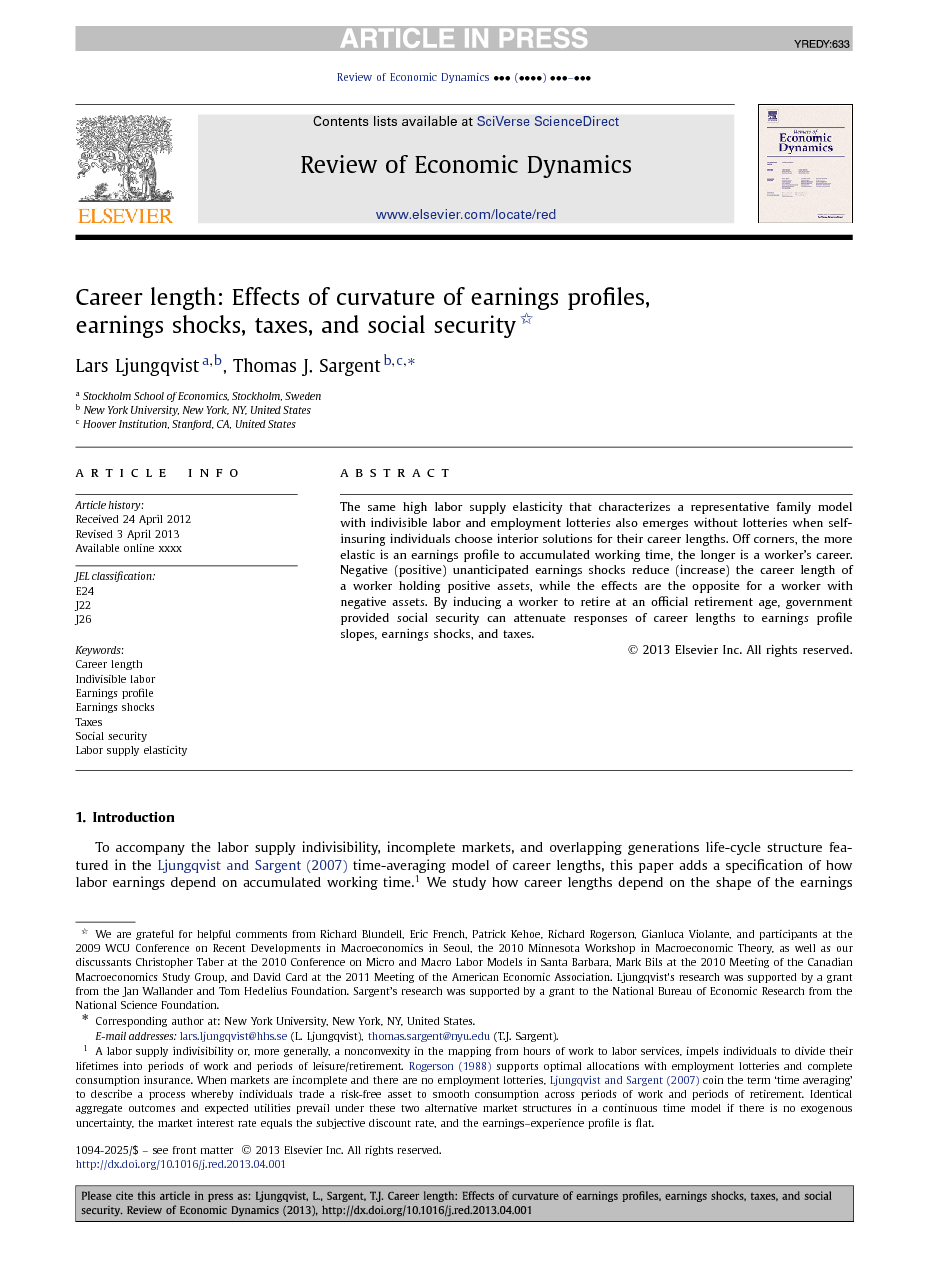 The same high labor supply elasticity that characterizes a representative family model with indivisible labor and employment lotteries also emerges without lotteries when self-insuring individuals choose interior solutions for their career lengths. Off corners, the more elastic is an earnings profile to accumulated working time, the longer is a workerʼs career. Negative (positive) unanticipated earnings shocks reduce (increase) the career length of a worker holding positive assets, while the effects are the opposite for a worker with negative assets. By inducing a worker to retire at an official retirement age, government provided social security can attenuate responses of career lengths to earnings profile slopes, earnings shocks, and taxes.

To accompany the labor supply indivisibility, incomplete markets, and overlapping generations life-cycle structure featured in the Ljungqvist and Sargent (2007) time-averaging model of career lengths, this paper adds a specification of how labor earnings depend on accumulated working time.1 We study how career lengths depend on the shape of the earnings profile, earnings shocks, taxes, and aspects of government financed retirement schemes. We obtain sharp outcomes by assuming preferences that are consistent with balanced growth2 and analytically establish findings that shed light on forces also at work in more complicated settings that can be studied only with numerical simulations.3 These are our principal findings: 1. The more elastic are earnings to accumulated working time, the longer is a workerʼs career. This result suggests the possibility that it is a higher slope of the earnings–experience profile of high wage workers, and not the level of the wage per se, that explains why people with higher wages and higher educations are more likely to retire later in life. Stark evidence for such a relationship is provided by a study of married womenʼs labor force participation by Eckstein and Wolpin (1989) that we revisit in Sections 7.1 and 7.2. 2. The sign of a workerʼs accumulated savings determines how planned career length responds to an unanticipated multiplicative shock to earnings, a shock that leaves unchanged the elasticity of earnings to accumulated working time. Specifically, a negative (positive) earnings shock reduces (increases) the career length of a worker holding positive assets at the time of the shock, while effects are opposite for a worker with negative assets. In light of increased variability of both transitory and permanent components of labor earnings observed in recent decades to have confronted U.S. workers, the finding that negative permanent earnings shocks shorten careers for workers in mid- and late-age who have positive savings identifies a force that can help to explain the increased incidence of early retirement in the OECD in recent decades, as we discuss in Sections 7.3, 7.4 and 7.5. 3. When tax revenues are returned as lump transfers to households,4 the elasticity of aggregate labor supply with respect to the net-of-tax wage rate is high in the time-averaging model, as it also is in an employment-lottery model. Advocates of high labor supply elasticities can appeal to this finding. 4. Social security tax and benefit rules put a kink into a workerʼs budget set that can lead to a corner solution for career length at an official retirement age. That effect extinguishes the high labor supply elasticity that would prevail at an interior solution. Consequently, proposals to reform social security can substantially alter the labor supply elasticity, a point that we elaborate in Sections 7.6 and 7.7 in the context of recent changes in the U.S. social security rules. Section 2 describes a lifetime labor supply problem in which a finitely lived worker confronts a labor supply indivisibility, chooses when to work, and smooths consumption by trading a risk-free bond. How career lengths are affected by the shape of an experience–earnings profile, unanticipated earnings shocks, taxes, and social security are studied in Sections 3, 4, 5 and 6, respectively. Implications for social security reform are discussed in Section 7, where we also indicate how the constellation of forces identified by our experiments may have balanced out in ways that can help explain variations in labor market outcomes across time and space. We also show how mechanisms in our stylized analysis shed light on forces at work in more complicated models that can be studied only numerically. Concluding remarks are offered in Section 8. Appendix A compares our time-averaging model to a corresponding employment-lottery model with complete markets. Throughout, we focus exclusively on the extensive margin and exclude movements along an intensive margin.5 A sign of remarkable progress in macroeconomics during the last few years is that closely related life-cycle models of career lengths now unite economists from camps whose members use diverse data to infer either high or low aggregate labor supply elasticities. The opposing camps now at least agree about a basic framework and the main forces at work, with major disagreements being confined to judgments about the balance among these forces. Advocates of high labor supply elasticities appeal to institutions and inferences about parameters that put workers at interior solutions for their career lengths.6 Advocates of low labor supply elasticities believe that career lengths are at corner solutions.7 We indicate in detail below how workers can be put at career-ending corners either by an official retirement age affiliated with government retirement programs or by the arrival of large negative and persistent shocks to their earnings capacities.

Proponents both of low and high aggregate labor supply elasticities have now united behind a theoretical framework that focuses on the determinants of lifetime labor supply. This is progress because high and low elasticity camps now at least talk about the same objects and forces. While there remains ample room for disagreement about the importance of the various forces identified in this paper, having a diverse group of researchers focus on a common set of observations on lifetime labor supply within a common theoretical framework bodes well for the ‘labor supply elasticity accord’ foretold by Ljungqvist and Sargent (2011