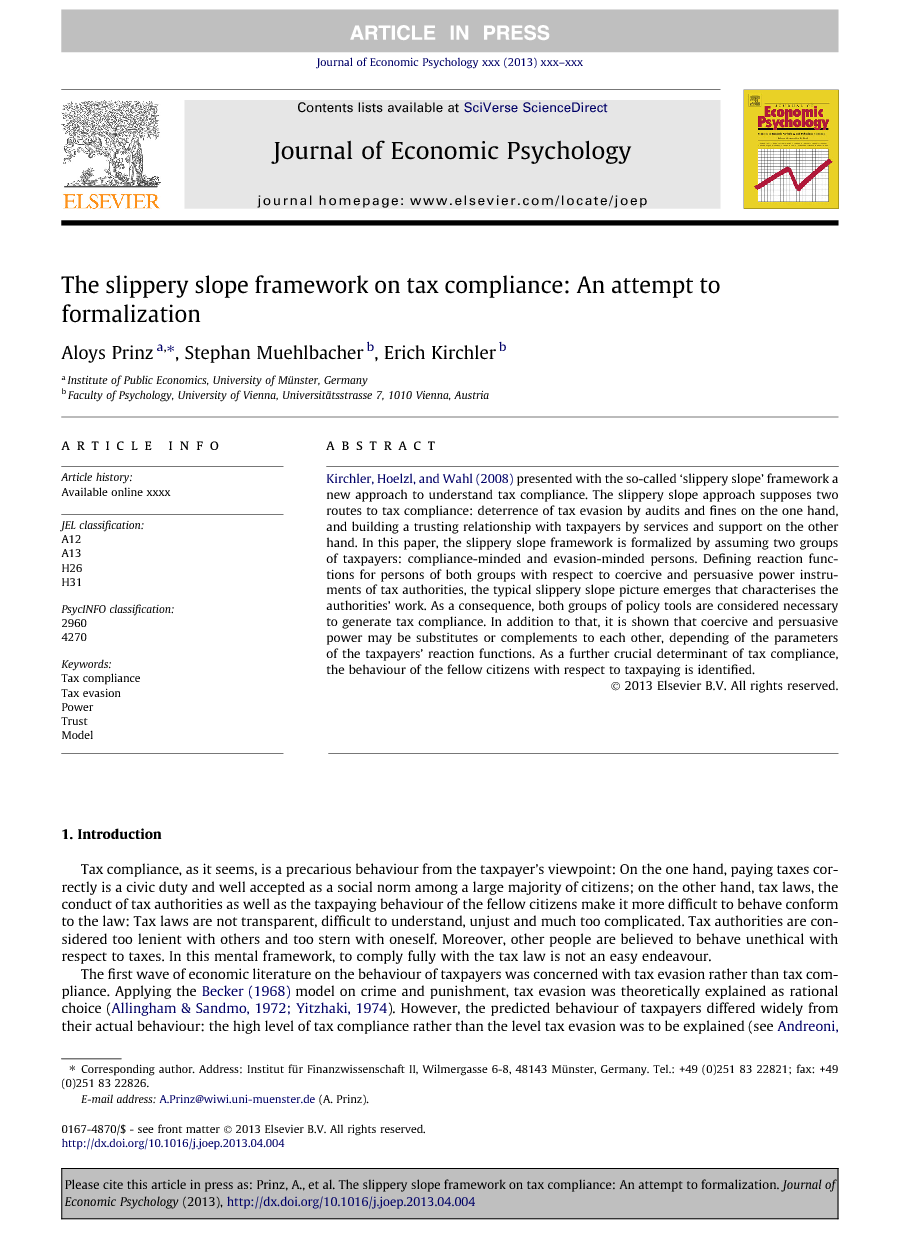 Kirchler, Hoelzl, and Wahl (2008) presented with the so-called ‘slippery slope’ framework a new approach to understand tax compliance. The slippery slope approach supposes two routes to tax compliance: deterrence of tax evasion by audits and fines on the one hand, and building a trusting relationship with taxpayers by services and support on the other hand. In this paper, the slippery slope framework is formalized by assuming two groups of taxpayers: compliance-minded and evasion-minded persons. Defining reaction functions for persons of both groups with respect to coercive and persuasive power instruments of tax authorities, the typical slippery slope picture emerges that characterises the authorities’ work. As a consequence, both groups of policy tools are considered necessary to generate tax compliance. In addition to that, it is shown that coercive and persuasive power may be substitutes or complements to each other, depending of the parameters of the taxpayers’ reaction functions. As a further crucial determinant of tax compliance, the behaviour of the fellow citizens with respect to taxpaying is identified.

Tax compliance, as it seems, is a precarious behaviour from the taxpayer’s viewpoint: On the one hand, paying taxes correctly is a civic duty and well accepted as a social norm among a large majority of citizens; on the other hand, tax laws, the conduct of tax authorities as well as the taxpaying behaviour of the fellow citizens make it more difficult to behave conform to the law: Tax laws are not transparent, difficult to understand, unjust and much too complicated. Tax authorities are considered too lenient with others and too stern with oneself. Moreover, other people are believed to behave unethical with respect to taxes. In this mental framework, to comply fully with the tax law is not an easy endeavour. The first wave of economic literature on the behaviour of taxpayers was concerned with tax evasion rather than tax compliance. Applying the Becker (1968) model on crime and punishment, tax evasion was theoretically explained as rational choice (Allingham and Sandmo, 1972 and Yitzhaki, 1974). However, the predicted behaviour of taxpayers differed widely from their actual behaviour: the high level of tax compliance rather than the level tax evasion was to be explained (see Andreoni, Erard, & Feinstein, 1998, for a survey).1 In this respect, tax psychology plays a major role (Kirchler, 2007). Although there were early attempts to combine insights as well as methods from psychology and social psychology with the economics of taxation (see for an overview Hansmeyer & Mackscheidt, 1977), it took a long time until these insights and methods were recognized in mainstream public economics. A recent result of the economic psychology of taxation is the so-called slippery slope framework (Kirchler et al., 2008). In this framework, trust in authorities and power of authorities as well as their interaction are decisive for tax compliance. In contrast to former approaches to tax compliance, it is taken into account that not all taxpayers share the same mentality to taxpaying and that not all of them react in the same way to measures of tax enforcement. Two forms of compliances are distinguished: enforced compliance and voluntary compliance. Whereas the former is assumed to depend mainly on power of authorities to enforce taxpaying, e.g., through audits and fines, the latter form of compliance depends mainly on trust in authorities and a good relationship with taxpayers, e. g., by providing certain kinds of services and support to make taxpaying easier and more convenient. Both strategies may be useful and necessary to guarantee a high level of tax compliance. As it seems, the combination of power and trust is crucial. A reduction of power and/or trust may lead to a slippery slope: At first, overall tax compliance decreases somewhat; beneath a certain level of power and/or trust, tax compliance might begin to sink quite drastically. In the following, it is attempted to formalize the slippery slope framework of tax compliance by Kirchler et al. (2008). In the context of a macroeconomic model of the labour market, a first formalization was presented by Lisi (2012a). In Eq. (5) of Lisi (2012a), a function for the generation of trust is defined in which the level of trust increases with the power of the tax authorities up to a certain point. Beyond that point, however, a further increase of power decreases trust; as a consequence, there is a unique level of power that maximizes trust in the tax authorities (Lisi, 2012a, Fig. 1, p. 5). Since trust increases tax compliance, declared income increases with the trust level. In contrast to Lisi (2012a), in this paper two different group of taxpayers are distinguished that react differently on power and trust, respectively. The static as well as the dynamic interaction of these type-groups are essential in our opinion to understand the difficulties tax authorities may face when deciding on a strategy to enhance tax compliance. The main contributions of the following formalization of the concept consist of the following points: 1. It concretizes ideas from the slippery slope approach by identifying the key parameters of the framework. In this way, it may serve as a starting point for empirical analyses. 2. It makes it easier to design experimental studies of the slippery slope phenomenon. 3. It provides insights for tax policy and tax authorities to set parameters for the deterrence-oriented as well as cooperation-oriented policies.

To conclude the paper, we first determine its practical implications. In a second section we suggest approaches to test the model presented here empirically. In the final section, the paper is summarized. 5.1. Practical Implications Empirical tax literature offers a variety of answers to the question, how coercive and persuasive power could be implemented by tax authorities (for an overview see for example Alm, 2007). Coercive power is achieved by the “classical” tools of deterrence, namely audit rates and fine rates (for a recent review of such effects see Kirchler, Muehlbacher, Kastlunger, & Wahl, 2010), but also by the effectiveness of audits, for instance through implementing different audit schemes such as the “cutoff rule” (Collins & Plumlee, 1991). Establishing persuasive power, however, might be more a complex endeavour. Several authors pointed out the importance of the interaction between tax authorities and taxpayers (e.g., Adams and Webley, 2001, Braithwaite, 2009, Cullis and Lewis, 1997 and Schmölders, 1970) and claim a shift from the cops-and-robbers paradigm in tax authorities’ work to a service-client approach (Alm and Torgler, 2011, Braithwaite, 2003b and Kirchler et al., 2008). It is likely to assume that a fair interaction results in higher levels of trust towards authorities and increases their persuasive power. Another issue is the (perceived) quality of authorities work. Institutional quality was shown to affect the size of the shadow economy (Torgler & Schneider, 2009), and confidence in national government institutions was shown to affect taxpayers’ morale (Fischer, 2008). Procedural fairness, i.e. transparency, consistency and fairness of the authorities’ decision process, also seems to affect trust and, in turn, tax compliance (Wahl, Muehlbacher, & Kirchler, 2010). High procedural fairness is achieved by allowing citizens to give their voice and vote for their preferences in policy. Hence shifting towards a more direct democracy would increase trust in authorities and consequently persuasive power. Indeed, the rich opportunities for participation in some of the Swiss Cantons often serve as explanation for the high degree of tax morale in Switzerland (e.g., Pommerehne & Weck-Hannemann, 1996). 5.2. Suggestions for testing the model empirically An empirical test of the model and the effects of coercive and persuasive power can be probably done most easily in the lab. For instance, both forms of power could be manipulated in an experiment using the scenario-technique. Hereby participants are required to put themselves in a situation that is presented in a vignette, which describes an artificial state exerting one or both forms of power to enforce tax compliance (c.f., Wahl, Kastlunger et al., 2010). Surveys are another possibility to test the model’s assumptions. They have the advantage to allow for measuring taxpayers’ perceptions of the power exerted by tax authorities. The transition from what governmental action is still perceived as persuasion or legitimate to what is clearly seen as coercion might be continuous. Measuring perceptions overcomes this problem and in addition would allow testing for the validity of distinguishing two forms of power. When using aggregate data from secondary sources such as the World Values Survey or others, levels of coercive and persuasive power can only be approximated. Proxies for both forms of power could be formed by some of the governance indicators from the World Bank (c.f., Kaufmann, Kraay, & Mastruzzi, 2010), which have previously been used to assess the quality of government (as in Torgler & Schneider, 2009), as well as power of authorities in general (as in Ruiu & Lisi, 2011). Regarding persuasive power the World Value Survey (as in Fischer & Schneider, 2009) and the Taxpayer Opinion Survey (as in Torgler, 2003) offer several items on confidence and trust in the national government, the parliament, the legal system, etc. Alternatively, coercion could be measured by the fine rates, the number of tax auditors, the budget for tax fraud investigation, etc., although admittedly these numbers are not officially published and would have to be collected first. Similarly, persuasive power could be measured for instance by the budget spent for tax services such as info-lines, websites, brochures, etc. 5.3. Summary The model presented here is an attempt to formalize the ideas of the slippery slope framework by Kirchler et al. (2008). The basic assumption is that taxpayers follow two different motivations for compliance. First, we assume that a group of taxpayers exists, whose compliance is mainly driven by the “classical” measures of deterrence as suggested in the standard economic model of tax evasion (Allingham and Sandmo, 1972 and Srinivasan, 1973). Second, we think that another group of taxpayers complies voluntary – simply because they feel morally obliged (c.f., Braithwaite, 2003a). The latter group’s compliance might mainly depend on the degree of persuasive power of tax authorities, which builds a base of trust that one’s tax money is in good hands. Based on these assumptions the model shows that authorities are well advised to apply both groups of instruments: measures that express their coercive power as well as measures of persuasive power are needed to establish tax compliance. The model captures the decreasing marginal return of these measures and demonstrates the slippery slope in tax authorities’ work: Since we assume that compliance-minded and evasion-minded taxpayers are not solely influenced by the instruments applied by tax authorities, but also by prevailing norms and the (actual or perceived) tax compliance levels of their fellow citizens, an unfavorable ratio of compliers and non-compliers might erode the authorities’ endeavour. Moreover, the dynamical analysis shows that the actual share of compliance-minded (evasion-minded) taxpayer can be understood as the equilibrium point of a strategic interaction of taxpayers. However, a share of evasion-minded taxpayers larger than zero and smaller than one seems to be an unstable fixed point of the dynamic if paying taxes does not provide utility for taxpayers. Hence, public policy should be careful to really decrease the share of evasion-minded taxpayers rather than to increase them. In this respect, the combination of instruments of coercive and persuasive power is crucial. If taxpayers draw utility from taxation which is based on persuasion rather than coercion, a stable equilibrium of a mix of tax evaders and tax compliers may result, which cannot be changed by small variations of both policy instruments.