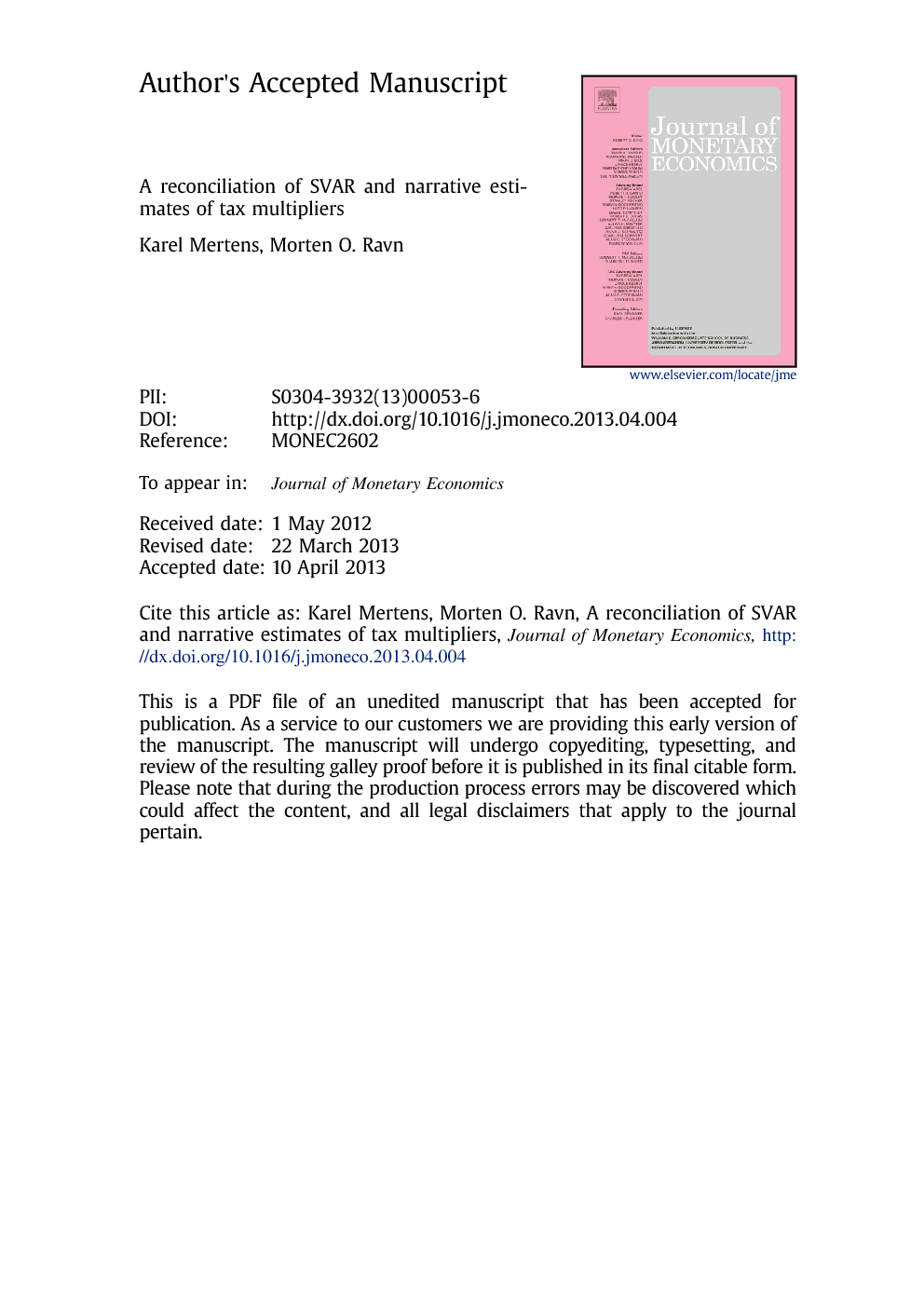 Existing empirical estimates of US nationwide tax multipliers vary from close to zero to very large. Using narrative measures as proxies for structural shocks to total tax revenues in an SVAR, we estimate tax multipliers at the higher end of the range: around two on impact and up to three after 6 quarters. We show that earlier findings of lower multipliers can be explained by an output elasticity of tax revenues assumption that is contradicted by empirical evidence or by failure to account for measurement error in narrative series of tax shocks.

A burgeoning empirical literature on the aggregate effects of changes in tax policy has produced a range of estimates of the effects on economic activity sufficiently broad that one might question the value of the findings. In this paper, we analyze the underlying reasons for the disagreement among the various methodologies. We do this by an application of a structural vector autoregression in which tax shocks are identified by proxies based on narrative tax shock measures. Our proxy SVAR estimates large tax multipliers in US data with relatively high precision. A comparison with the popular (Blanchard and Perotti, 2002) approach reveals a fundamental conflict in the cyclical adjustment of tax revenues. The narrative identification method clearly implies that the output elasticity of tax revenues is significantly greater than calculated by international organizations. Differences with earlier narrative studies can be explained by measurement error, which our proxy SVAR identifies in the data. The evidence in this paper is supportive for tax multipliers that are at the higher end of the range, such as those of Mountford and Uhlig (2009) and Romer and Romer (2010), and rejects the lower estimates of for instance Blanchard and Perotti (2002) and Favero and Giavazzi (2012). Unlike all these studies, however, we also find large output effects of tax changes in the short run. There are several directions for future research. Our analysis raises concerns with the cyclical adjustment procedures of government and international institutions and calls for alternative, structural, approaches to the estimation of the output elasticity of tax revenues. This is important since this elasticity is a vital ingredient of policy evaluations, budget forecasting, and other empirical work, e.g. on fiscal consolidations by Alesina and Ardagna (2010). In focusing attention on cyclical adjustment and measurement error, we followed the common practice of studying the effects of shocks to total revenues in linear models. Other aspects of the empirical study of tax policy shocks, such as the dependence on the type of the tax instrument being adjusted or the possible time-varying nature of tax multipliers can be incorporated. Given that narrative measures of policy shocks become increasingly available, our analysis can be repeated in the future for other countries as well as for other types of shocks. Finally, our analysis is also informative about features that can improve the explanatory and predictive power of theoretical models of fiscal policy. These features are likely to include large tax multipliers and high output elasticities of tax revenues.