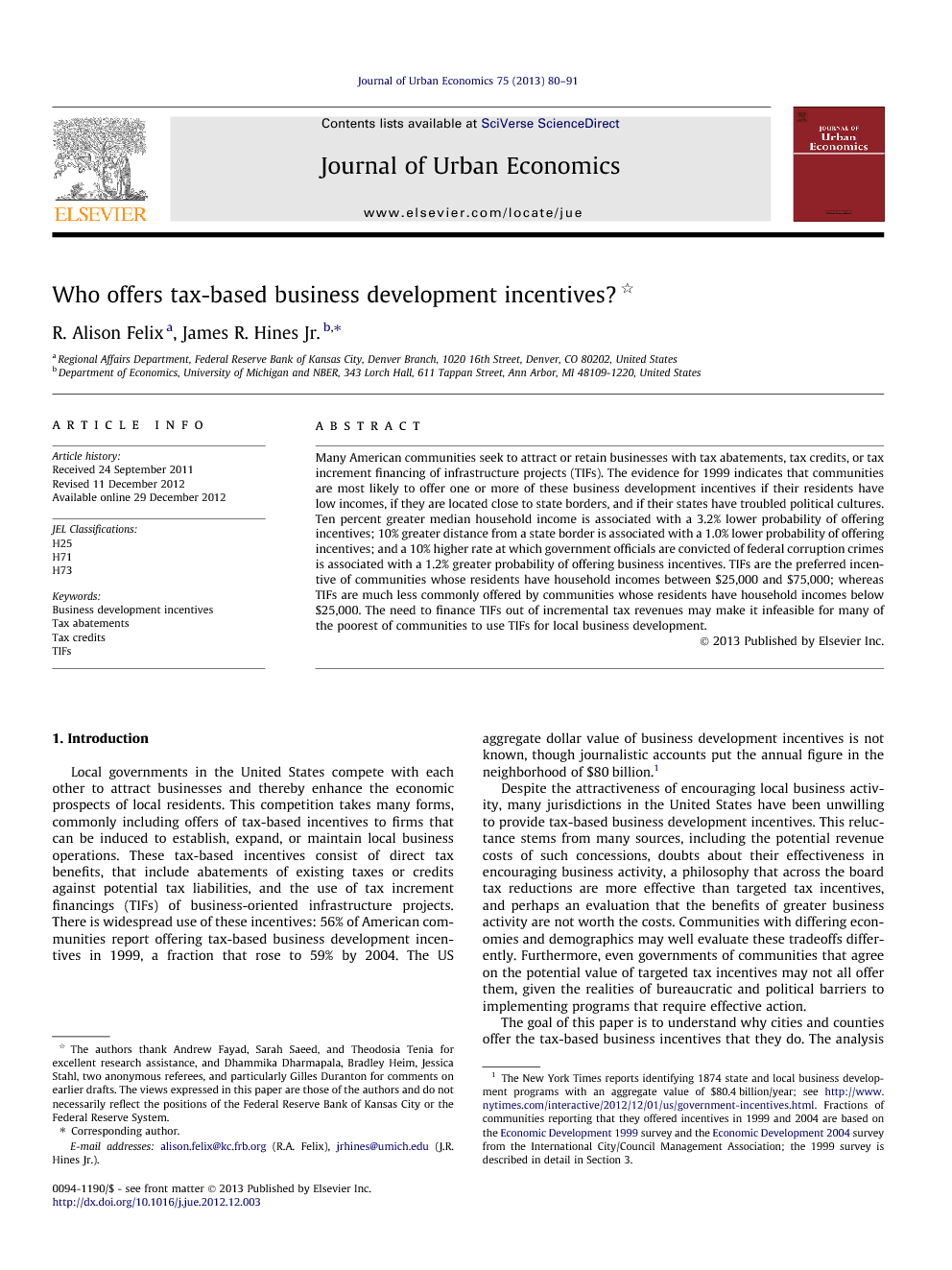 Many American communities seek to attract or retain businesses with tax abatements, tax credits, or tax increment financing of infrastructure projects (TIFs). The evidence for 1999 indicates that communities are most likely to offer one or more of these business development incentives if their residents have low incomes, if they are located close to state borders, and if their states have troubled political cultures. Ten percent greater median household income is associated with a 3.2% lower probability of offering incentives; 10% greater distance from a state border is associated with a 1.0% lower probability of offering incentives; and a 10% higher rate at which government officials are convicted of federal corruption crimes is associated with a 1.2% greater probability of offering business incentives. TIFs are the preferred incentive of communities whose residents have household incomes between $25,000 and $75,000; whereas TIFs are much less commonly offered by communities whose residents have household incomes below $25,000. The need to finance TIFs out of incremental tax revenues may make it infeasible for many of the poorest of communities to use TIFs for local business development.

American cities and counties frequently offer business development incentives; variations in this practice suggest some of their motives in doing so. Communities with low incomes, those located close to state borders, and those in states with more troubled political cultures are the most likely to provide incentives. Among the incentives provided, the poorest communities prefer to offer tax abatements and credits rather than TIFs, whereas for middle-income communities TIFs are much more likely to be the incentive of choice. It is not difficult to understand the motives of low-income communities in seeking to attract greater business activity, with its accompanying economic opportunities for local residents, even if doing so entails foregoing potential sources of tax revenue. States also face a tradeoff between business activity and tax revenue, with the added complication that incentives offered by one locality in a state may have the effect of drawing business away from other jurisdictions in the same state. Consequently, it makes sense for states to encourage local business development incentives more strongly in the case of jurisdictions located near borders with other states, since more of the impact of relocating business activity is likely to come at the expense of another state. Possibly as a result, cities and counties proximate to state borders are more likely than others to offer business development incentives. The evidence on state political culture probably reflects the operation of more subtle considerations. In the international context Dharmapala and Hines (2009) report that tax havens, which are zero- or very low-tax countries and territories, score higher on measures of governance quality than do higher-tax countries with similar incomes and populations. The interpretation they offer is that the attractiveness of a low-tax environment would be insufficient to draw significant added business activity to a country otherwise plagued by bad governance and the economic problems that accompany it. The costs of bad governance in American cities and counties are doubtless considerably smaller than they are in some other parts of the world, but their potential to influence resource allocation is nonetheless quite real. Tax havens operate by providing general tax relief to outside investors, which avoids at least some of the potential for insider deals and affords a more reliable business environment than one in which deals are individually negotiated and may need to be subsequently renewed. Similarly, American communities in states with less troubled political cultures tend to avoid offering business incentives, presumably because they prefer to tailor their general tax levels, spending programs, and other policies to attract businesses without designing specific deals for specific firms and industries. Among communities that offer incentives there are clear patterns in which those with very poor residents, and those in states with more troubled political cultures, are less likely than others to provide TIFs. TIFs can be financed only in cases in which it might be reasonably anticipated that tax revenues will rise as a result of greater infrastructure expenditures, and this design feature makes it very difficult to use them in the poorest of communities. Troubled political cultures likewise impede the ability of communities to offer TIFs, and may also influence their desire to do so, since direct tax benefits in the form of abatements and credits may hold more appeal. Communities are most likely to offer business development incentives when they stand to benefit from the resulting business activity and the economic environment makes it feasible, or – in the most competitive situations – almost irresistible, that they do so.