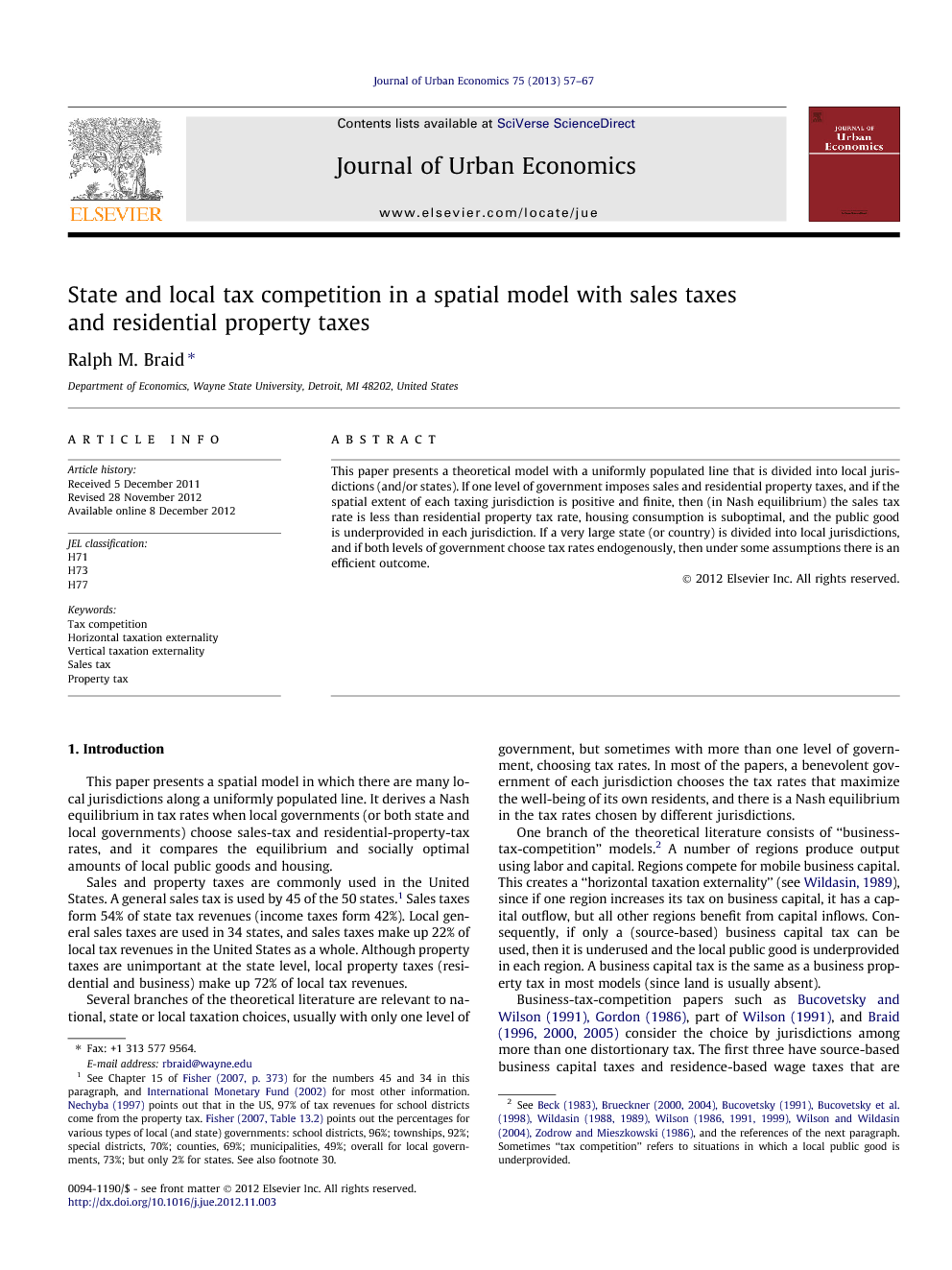 This paper presents a theoretical model with a uniformly populated line that is divided into local jurisdictions (and/or states). If one level of government imposes sales and residential property taxes, and if the spatial extent of each taxing jurisdiction is positive and finite, then (in Nash equilibrium) the sales tax rate is less than residential property tax rate, housing consumption is suboptimal, and the public good is underprovided in each jurisdiction. If a very large state (or country) is divided into local jurisdictions, and if both levels of government choose tax rates endogenously, then under some assumptions there is an efficient outcome.

An overview of the analysis and the results in my paper is found in the final several paragraphs of Section 1 (and in Proposition 1, Proposition 2, Proposition 3, Proposition 4, Proposition 5, Proposition 6 and Proposition 7 of Sections 4, 5, 7 and 8). In this section, I first present the results of a simple comparative static exercise, and I indicate how this result, and other comparative static results that might be derived, could lead to potentially interesting empirical work. Then I consider various limitations of my model that lead to a number of potentially worthwhile variations and extensions of the theoretical model in this paper. It is possible to consider the comparative statics of local tax rates, using the model of Section 3, with respect to exogenous changes in state tax rates. The simplest interesting case is when a state does not use property taxation (σ = 0) and its local governments cannot use sales taxes (t = 0).33 Totally differentiating (18), (19) and (24) with respect to an exogenous change in the state sales tax rate (s) leads to somewhat complicated equations. To derive results, it is necessary to assume more than g′(h) > 0, g″(h) < 0, m′(G) > 0 and m″(G) < 0. If I assume T = 0 (no transfers to local governments) and the functions (54) and (55) for g(h) and m(G), then it can be shown that an exogenous increase in s leads to increases in the local property tax rate (τ), per-capita housing consumption (h), and the local public good (G) in each local jurisdiction, and that an exogenous change in the state income tax rate, L, has no effects on these variables. It might be possible to test the theoretical predictions above, concerning the effects of differences in s and L across states on local property tax rates, using the 16 states that do not allow local sales taxation.34 It might also be possible to examine the effects of differences in s and L on local sales-tax and property-tax rates, using the 34 states that do allow at least some local sales taxation, although deriving theoretical comparative static results is harder in this case. The model used in this paper abstracts from certain features of the real world, suggesting possible extensions. First, in the real world, in the United States, general sales taxes that are imposed by states and local jurisdictions typically do not tax certain goods, most notably services and (non-restaurant) food. Footnote 13 suggests an alternative formulation which could be used to examine this, with two taxed goods (a numeraire good, z, and housing, h), only one of which (z) is subject to cross-border shopping, and one untaxed good (q). Efficiency might not require equal state-plus-local tax rates on the two taxed goods (as in (33) and Proposition 1). Second, in the US, 16 of the 50 states do not allow any local governments to impose general sales taxes, something considered to some extent in the second paragraph of this section (but only with an exogenous state sales tax rate), and five states do not have a state sales tax. Another feature of the real world is that different states, and different local jurisdictions within a state, are of different sizes. This is considered in some sales-tax-competition models in which governments use only a sales tax (some of these have Leviathan objective functions for governments, unlike my paper). Intuitively, this is a reason that large central cities (in states that allow local sales taxation) often have higher sales tax rates than the surrounding suburbs. Also, population density typically varies significantly within a state. In some states, a large fraction of the population is in a large metropolitan area, and the importance of actual or potential cross-state-border shopping varies significantly depending on whether this metropolitan area is in the middle of the state or at one of its boundaries, especially if a significant fraction of the metropolitan area is across the boundary in a neighboring state, as in (for example) New York City, Philadelphia, Washington DC, and to a lesser extent Chicago.35 My paper assumes two levels of government choosing tax rates endogenously in Sections 6, 7 and 8. Some countries have three levels of government (see footnote 30). In the United States, the federal government also imposes taxes, mostly income taxes (see footnote 30), and has certain policies which subsidize housing (see footnote 32). Also, in most US states, there are multiple types of local governments that impose taxes, including counties (typically the largest local jurisdictions), municipalities, townships and school districts. Finally, it is important to note that I have focused on the choice of sales-tax and property-tax rates by state and local governments (I have lump-sum state income taxes in some equations, but they are exogenous). In the real-world, countries and US states can choose their income tax rates, and at least some local governments use income taxes in 14 of the 50 US states.