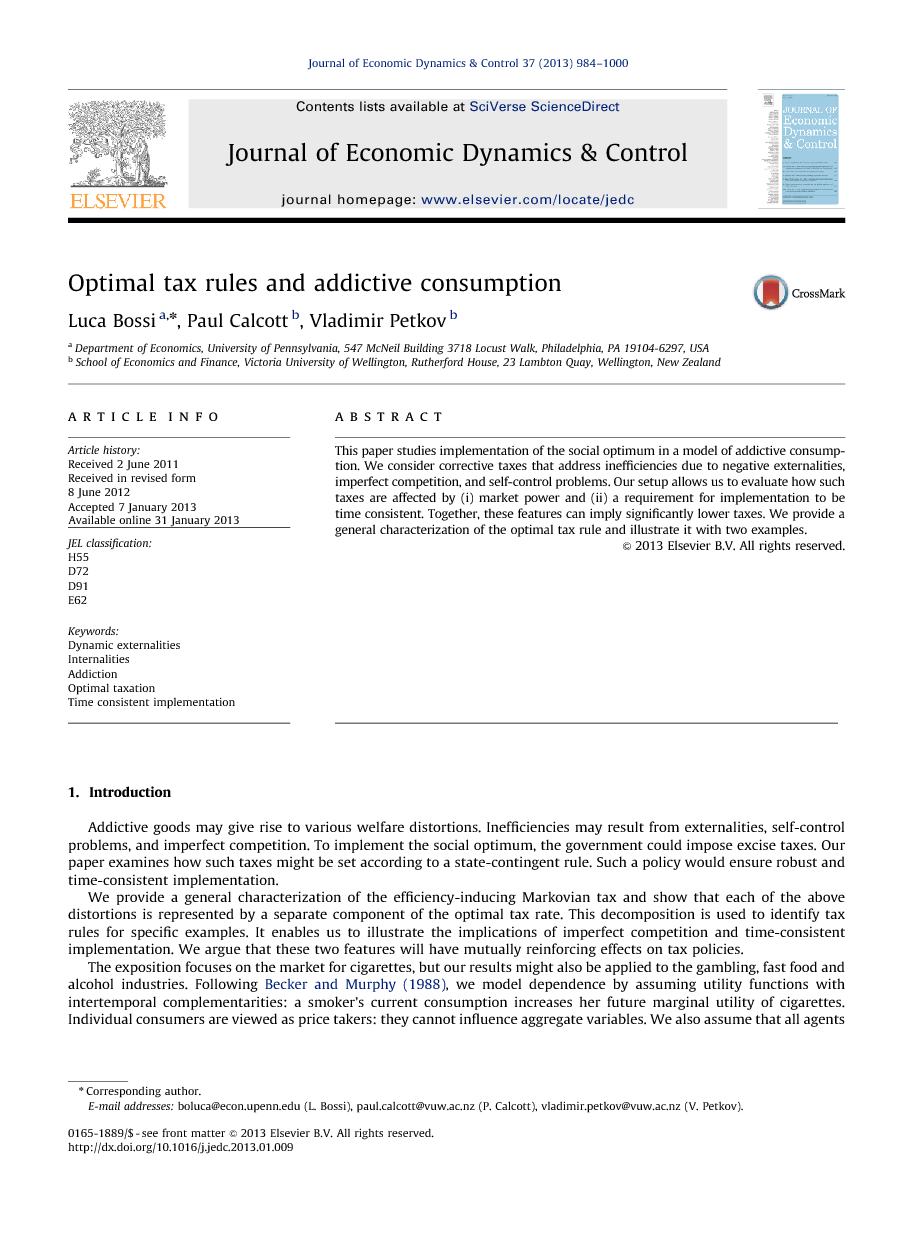 This paper studies implementation of the social optimum in a model of addictive consumption. We consider corrective taxes that address inefficiencies due to negative externalities, imperfect competition, and self-control problems. Our setup allows us to evaluate how such taxes are affected by (i) market power and (ii) a requirement for implementation to be time consistent. Together, these features can imply significantly lower taxes. We provide a general characterization of the optimal tax rule and illustrate it with two examples.

This paper studies government intervention in an oligopolistic industry producing an addictive good. We construct a tax policy which corrects inefficiencies arising from: (i) a negative stock externality, (ii) consumption internalities, and (iii) producers' market power. Addiction has important implications for tax policy design. In particular, the government may be tempted to renege on previously determined tax plans. The reason is that the wedge between private and social values of marginal changes in addiction typically varies over time. To address this issue, we consider tax rules that are contingent on the aggregate addiction stock. Our paper provides a general characterization of these instruments. We illustrate our analysis with two examples. When payoffs are homogeneous of degree one, efficiency can be implemented with a constant tax rate. If, however, payoffs are quadratic, the optimal tax rate will depend on the aggregate addiction stock. We calibrate the quadratic model to match the US market for cigarettes and show how time consistent implementation and imperfect competition together would imply a substantially lower corrective tax. Our analysis has some caveats. First, we do not deal with the life cycle aspects of addiction, whereby many people begin smoking as teenagers and some manage to quit. Incorporation of these aspects would render the model intractable. Second, we assume that consumers are identical. In some settings we are able to cope with heterogeneities in addiction stocks. However, there may be other differences across smokers, e.g. in their utilities or discount factors. Third, we do not explore all normative frameworks or explanatory models. Alternative value judgments or models of addiction may lead to different implications. Finally, the paper focuses exclusively on sophisticated smokers. The appropriate modeling approach for consumer behavior is still debated in the literature. Naive smokers will also benefit from such taxes, but they may not deem time consistent tax rules credible.