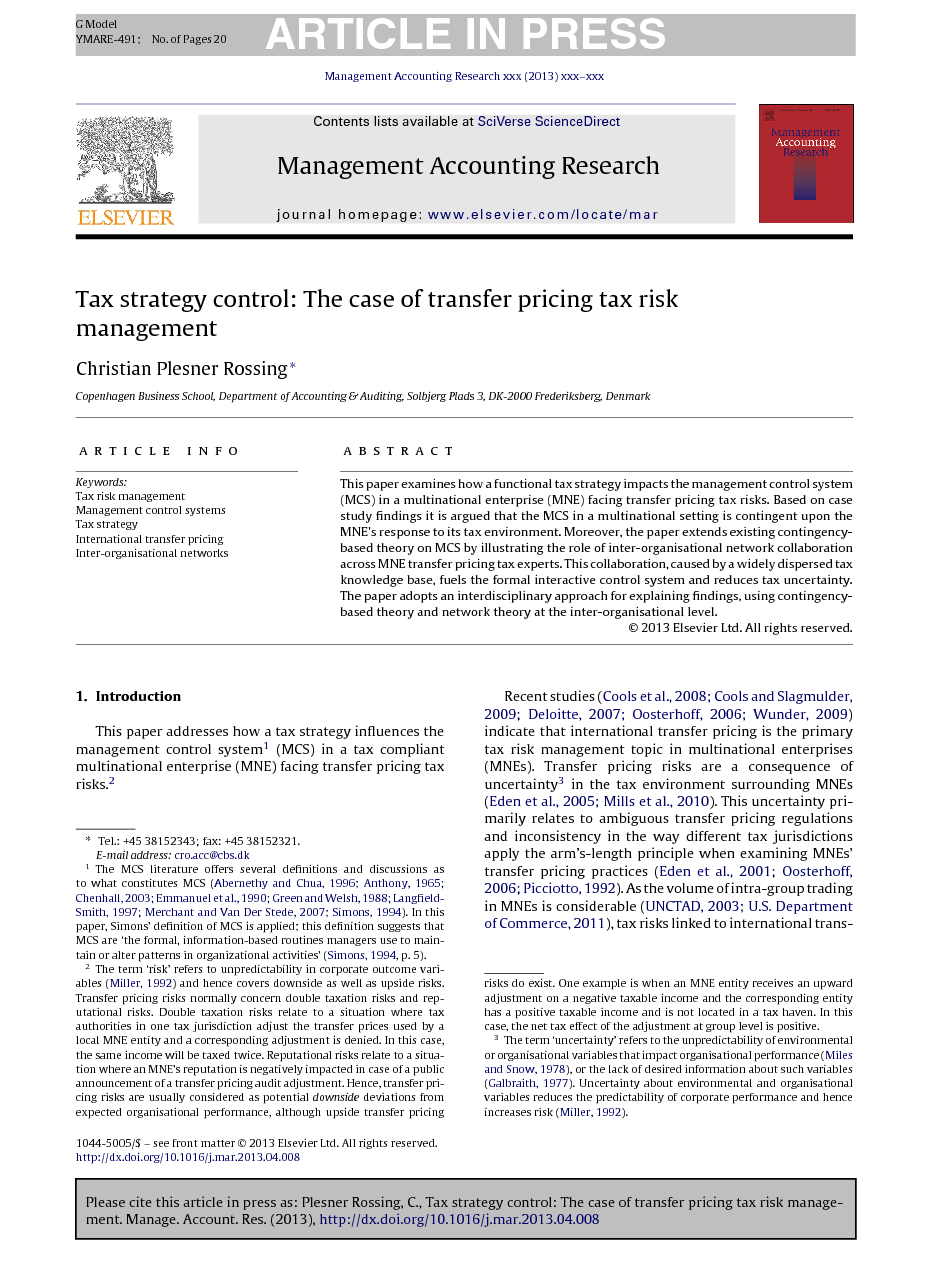 This paper examines how a functional tax strategy impacts the management control system (MCS) in a multinational enterprise (MNE) facing transfer pricing tax risks. Based on case study findings it is argued that the MCS in a multinational setting is contingent upon the MNE's response to its tax environment. Moreover, the paper extends existing contingency-based theory on MCS by illustrating the role of inter-organisational network collaboration across MNE transfer pricing tax experts. This collaboration, caused by a widely dispersed tax knowledge base, fuels the formal interactive control system and reduces tax uncertainty. The paper adopts an interdisciplinary approach for explaining findings, using contingency-based theory and network theory at the inter-organisational level.

This paper addresses how a tax strategy influences the management control system1 (MCS) in a tax compliant multinational enterprise (MNE) facing transfer pricing tax risks.2 Recent studies (Cools et al., 2008, Cools and Slagmulder, 2009, Deloitte, 2007, Oosterhoff, 2006 and Wunder, 2009) indicate that international transfer pricing is the primary tax risk management topic in multinational enterprises (MNEs). Transfer pricing risks are a consequence of uncertainty3 in the tax environment surrounding MNEs (Eden et al., 2005 and Mills et al., 2010). This uncertainty primarily relates to ambiguous transfer pricing regulations and inconsistency in the way different tax jurisdictions apply the arm's-length principle when examining MNEs’ transfer pricing practices (Eden et al., 2001, Oosterhoff, 2006 and Picciotto, 1992). As the volume of intra-group trading in MNEs is considerable (UNCTAD, 2003 and U.S. Department of Commerce, 2011), tax risks linked to international transfer pricing have become significant and should be properly managed. While a few studies have examined tax regulation effects on transfer pricing practices in MNEs (e.g. Borkowski, 2001, Borkowski, 2008, Borkowski, 2010, Cools et al., 2008, Cools and Slagmulder, 2009 and Plesner Rossing and Rohde, 2010), these studies have not explicitly investigated how MNEs attempt to reduce tax uncertainty linked to international transfer pricing and the way MCSs can be employed and used for this specific purpose. Such studies are relevant, as they may improve the current literature's limited understanding of how MNEs apply MCS for tax risk management purposes and assist top managers in practice in their search for ideas to manage tax risks. Consequently, this paper seeks to answer the research question: How does a functional tax strategy influence the management control system in a multinational enterprise facing transfer pricing tax risks? The present paper responds to recent calls for studies of organisational risk management practices and the way MCS can be used for this purpose (Arena et al., 2010, Bhimani, 2009, Hagigi and Sivakumar, 2009 and Woods, 2009), including the role of inter-organisational networks for risk management and strategic control (Chua and Mahama, 2007, Hopwood, 1996 and Miller et al., 2008). It contributes to the contingency-based school of accounting research, which investigates how and to what extent management accounting and control systems are contingent upon organisational and environmental circumstances (e.g. Borkowski, 1990, Borkowski, 1992a, Borkowski, 1992b, Borkowski, 1997, Chenhall, 2003 and Cools et al., 2008). Also, the paper aims at integrating accounting and taxation disciplines, as called for in recent literature reviews (e.g. Dykxhoorn and Sinning, 2010, Hanlon and Heitzman, 2010 and Shackelford and Shevlin, 2001). So far, these two academic disciplines have tended to be treated separately in the literature, in spite of the close relationship that exists between them. In a practical sense, this paper responds to recent calls for MCS research that focuses on providing research insights and results that are useful to corporate managers in real-life situations (e.g. Baldvinsdottir et al., 2010). International transfer pricing remains at the top of the tax risk management agenda in MNEs (Wunder, 2009), and hence contributions that may assist practitioners in their search for ideas on how to align their practices with an increasingly uncertain and ambiguous tax environment are required. The paper is structured as follows: Section 2 presents the MNE tax environment. Section 3 presents the contemporary transfer pricing literature and this study's theoretical frame of reference. Research strategy and design are described in Section 4, and Section 5 presents the case analysis and results. Section 6 discusses case results, and Section 7 presents the conclusions of the study.

This paper has addressed how a functional tax strategy influences the MCS in an MNE facing transfer pricing tax risks. Applying ‘Levers of Control’ (Simons, 1995) as a guiding framework, it is found that a functional tax strategy for transfer pricing influences on all four control levers, which suggests that the MCS in a multinational setting is contingent upon the MNE's response to its tax environment. Specifically, belief systems and interactive control systems are employed and then used in an inspiring way to reinforce the values upon which the tax strategy is based, and to stimulate learning about the tax environment for subsequent fine-tuning of the MNE's current transfer pricing practices. Furthermore, boundary systems and diagnostic control systems are employed and then used prescriptively to constrain and guide accepted behaviour, both in the central tax department and at business unit level, as well as to ensure monitoring of business unit profit margins considered to be arm's-length. An additional significant observation, adding to the existing contingency-based MCS theory, is that inter-organisational network ties play a key role for the interactive control process that takes place in an MNE in relation to its tax strategy. Specifically, as transfer pricing knowledge is found to be widely dispersed among MNE transfer pricing specialists, these individuals establish various forms of inter-organisational network ties to access complex information for the purpose of reducing tax uncertainty. The knowledge generated from various forms of network collaboration across MNEs is subsequently used to enhance the quality of discussions during interactive control. Hence, in order to ensure a more complete understanding of MCS in a multinational setting, it is necessary to take into consideration the role inter-organisational networks play for an interactive control system. This study has some limitations. Specifically, as a single-case study research strategy was used, it is not possible to conclude that the findings may be generalised to apply to other MNEs. However, the fact that the transfer pricing networks exist is a strong indication that similar patterns of inter-organisational collaboration on tax matters can be found in other MNEs pursuing a tax compliance strategy. Conversely, it is possible that the influence on managerial controls in MNEs that apply more aggressive tax avoidance strategies would deviate from those observed in this particular study. In fact, it is questionable whether such MNEs would even be willing to participate in inter-organisational networks, as this would most likely require them to expose their tax avoidance schemes. Finally, the current study does not allow any conclusions with regards to what might induce a transfer pricing specialist to leave an inter-organisational network at a certain point in time. Currently, many fertile avenues are open for future research on tax risk. In relation to APAs, more field work is needed to achieve better understanding of the relationship between tax authorities and MNEs, including why not more APAs exist. Also, the potential impact of tax compliance on intra-group finance activities and structures would contribute to the current body of literature. Moreover, tax risks in due diligence processes are absent from current theory, although they may very well play a significant role for the valuation of target companies. In addition, with respect to financial reporting of transfer pricing tax risks under FIN48, little is known about the process of identifying and quantifying tax risks for external reporting purposes. Finally, the potential impact of VAT regulation on MNEs’ transfer pricing systems is not well-understood and remains an area for future research.