Journal : The Journal of Socio-Economics, Available online 20 May 2013 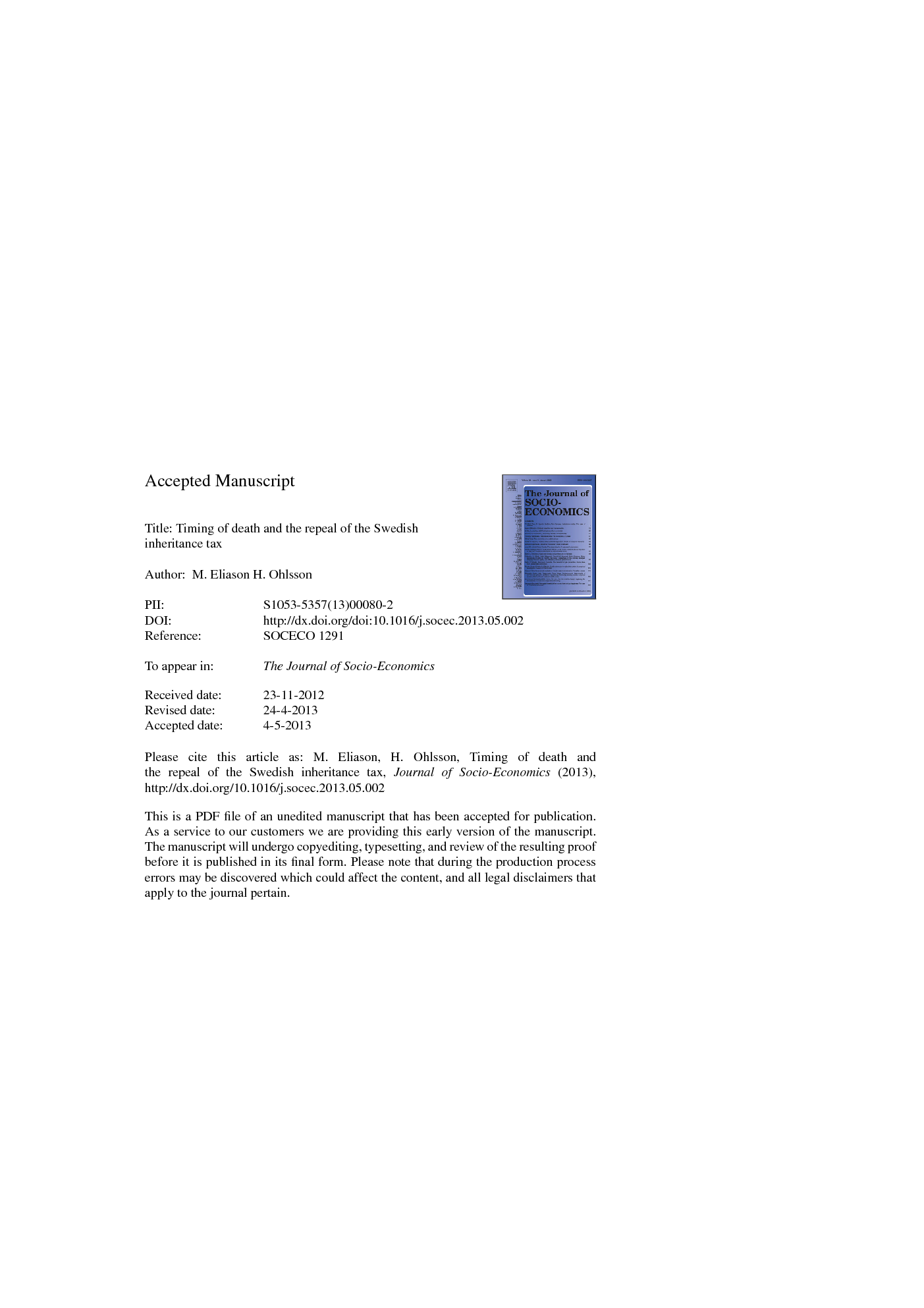 In response to the repeal of the Swedish inheritance tax people postponed death to avoid taxes. This is an example of the far-reaching behavioral effects of economic incentives and of unintended consequences of policy changes. Using individual data, including information on taxable estates, we find that deceased with, compared to those without, tax incentives to postpone death were 10 percentage points more likely to die the day after rather than the day before the repeal. An extended analysis suggests that the timing of deaths was affected not only during these two days but during a longer surrounding period.

In Economics, incentives are assumed to play a central role in motivating and influencing human behavior, but is it reasonable to assume that even the timing of death may respond to economic incentives? Kopczuk and Slemrod (2003) raised this question in their Ig Nobel prize-winning study on whether deaths respond to changes in estate taxes. Although this, at first, may seem farfetched – or “improbable” as the prize suggests – they do report evidence that this, nonetheless, might be the case. By studying a series of changes in the US estate tax system, they showed that potential tax savings from estate tax reforms increased the likelihood of dying in the lower tax regime. This finding is a fascinating example, both of how far-reaching the effects of economic incentives on human behavior might be and of unintended consequences of policy changes. The seminal study by Kopczuk and Slemrod (2003) has been followed by two other studies exploring how aggregated mortality was affected by the inheritance tax repeals in Australia and Sweden. Gans and Leigh (2006) studied the impact of the 1979 inheritance tax repeal in Australia on aggregate daily mortality. They estimated that about 5 percent of the deaths were shifted from the week preceding the tax repeal to the following week. Eliason and Ohlsson (2008) studied aggregate daily mortality during the time periods around the partial and complete repeal of the Swedish inheritance tax. Their main result was that mortality decreased by 17 percent the day before the expected tax repeals. However, both these studies lacked information on whether the heirs of the deceased were subject to inheritance taxation or not. This has been remedied here by constructing a data set based on estate reports of all Swedish residents who died around the two Swedish repeals. The estate reports provide the crucial information on whether the estates were large enough to have made those inheriting liable to pay taxes had the death occurred before the repeal. Thus, we are able to extend the previous studies by examining the impact of a complete repeal of an inheritance tax on the timing of death using individual data containing information on taxable estates. Kopczuk and Slemrod (2003) had access to similar individual level data on estates, but their study period did not contain a complete repeal but a series of less pronounced changes in the estate tax. A complete repeal, rather than a less pronounced change, does not only increase the economic incentives, but is also more likely to be known by most people. Gans and Leigh (2006) and Eliason and Ohlsson (2008), on the other hand, studied the impact of complete repeals, but on aggregate mortality, and therefore they could not compare the timing of death among those who were, and those who were not, affected by the repeals. We believe that we make a contribution to three branches of the academic literature. First, to the economic literature on how human behavior may respond to economic incentives. In addition to the already mentioned studies on mortality and tax changes, this literature also includes, for example, studies on how the timing of births responds to economic incentives (e.g., Dickert-Conlin and Chandra, 1999, Gans and Leigh, 2009, Tamm, 2009 and Neugart and Ohlsson, 2013). Second, we also contribute to the medical literature on postponement of death. A series of articles have previously investigated mortality patterns around symbolically meaningful occasions such as birthdays and religious holidays (see for a review Skala and Freedland, 2004). Finally, this study is also related to the literature on unintended consequences of policy changes (see for a review Roots, 2004). Any attempts to postpone death to escape the inheritance tax may not only have caused additional suffering to the dying person, but also implied ethical dilemmas for physicians, caregivers, and relatives, and an inappropriate level of care. The rest of the paper is structured as follows: In the next section we describe the repeal process of the Swedish inheritance tax and also discuss how death can, possibly, be postponed. In Section 3, we describe how the data set was constructed and present descriptive statistics. In Section 4, we present the econometric evidence. The main estimations are supplemented by sensitivity analyses and extended analyses. Finally, Section 5 concludes.

In the present paper, we have studied whether the repeal of the Swedish inheritance tax affected the timing of deaths among those who had tax incentives to postpone death. We have found that deceased who left, compared to those who did not, inheritances that would have been taxed if death had occurred before the repeal were 10 percentage points more likely to die the day after rather than the day before the repeal. Hence, this suggests that tax incentives do seem to have affected the timing of deaths. By performing a “placebo” test, we could reasonably rule out the possibility that this death deferral effect was driven by factors unrelated to the tax incentive. An extended analysis, where the estimation window surrounding the complete repeal of the inheritance tax was increased (but using a systematic cluster sample of deceased), suggested that the main estimate might be an underestimate of the total effect on successful postponements. This analysis also suggests that deaths were affected during a longer period before than after the reform. Furthermore, as the analyses only captured the impact on successful postponements of death (i.e., postponements that implied that the tax was avoided), the total behavioral response to the tax repeal may have been even larger. Unless not the whole estimated impact was driven by changes only in reported as opposed to actual timing of deaths, it is reasonable to assume that there were also postponements that in the same sense were unsuccessful. What then are the lessons that can be learned from this study? First, it adds to the economic literature on how far-reaching the behavioral responses might be to economic incentives in general and taxes in particular. Previous studies have shown that economic incentives affect not only the timing of economic decisions but also other events such as births and marriages. Three other studies (i.e., Kopczuk and Slemrod, 2003, Gans and Leigh, 2006 and Eliason and Ohlsson, 2008) have also found evidence that the timing of death may respond to tax changes. Moreover, plenty of medical studies have investigated whether death can be postponed until after symbolically meaningful occasions such as religious holidays. In most of the studies showing evidence that death can be postponed, it is suggested that the mechanism is that terminally ill by volitional control over some undefined psychosomatic processes might be able to briefly defer death. However, there is no consensus in the literature even on the matter whether it is possible or not. Unfortunately, we are not able to shed much light on this issue although an analysis stratified by whether death occurred in a hospital or not showed a somewhat larger death deferral effect among the former. A mechanism that perhaps lies nearer at hand than postponement of death by will is that, in many circumstances, modern medical technology allows physicians to postpone a patient's death. If such a mechanism is at play, then the repeal might have caused ethical dilemmas for many physicians, caregivers, and relatives, and also inappropriate levels of care since postponement of death among terminally ill by life-sustaining treatment as a tax planning strategy is not a matter of prolonging life but about delaying death.22 This brings us to the next lesson, that unintended consequences of policy have to be taken into account in any policy decision. In the present case, could these consequences have been circumvented? What first comes to mind might be to suggest that the tax repeals should have been retroactive in order to avoid any undesirable behavioral responses. This, however, would be to jump too quickly to a conclusion. Although decreasing taxes retroactively would in principle be possible – this is also what happened in the case of the complete repeal in Sweden because of the many victims of the Asian Tsunami – it is likely that repeated retroactive tax decreases soon will become expected and then behavior will be affected nonetheless.23 A gradual implementation would, therefore, be a preferable solution. Although it would not entirely remove the threshold effects, these would be considerably smaller and consequently also any undesirable behavioral responses.