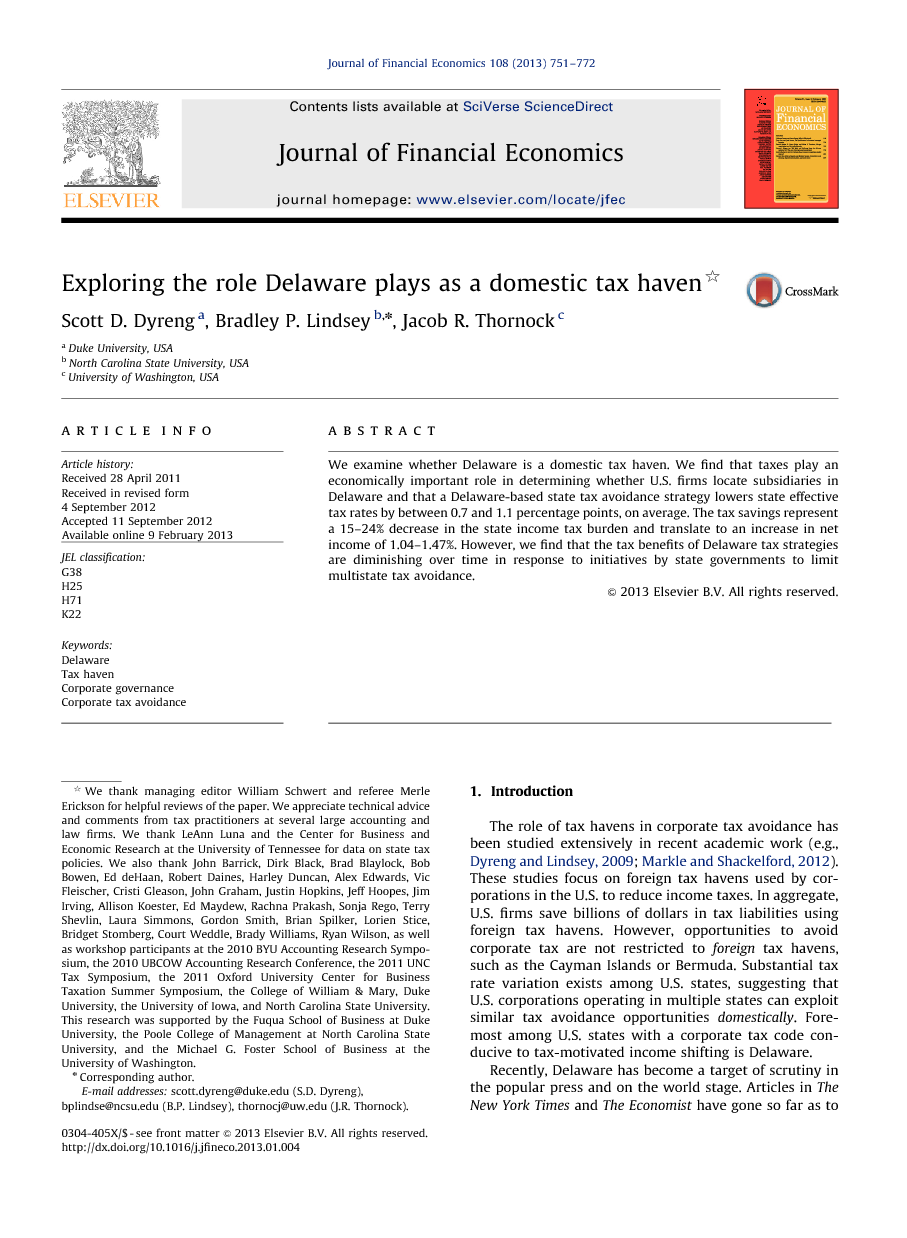 We examine whether Delaware is a domestic tax haven. We find that taxes play an economically important role in determining whether U.S. firms locate subsidiaries in Delaware and that a Delaware-based state tax avoidance strategy lowers state effective tax rates by between 0.7 and 1.1 percentage points, on average. The tax savings represent a 15–24% decrease in the state income tax burden and translate to an increase in net income of 1.04–1.47%. However, we find that the tax benefits of Delaware tax strategies are diminishing over time in response to initiatives by state governments to limit multistate tax avoidance.

In this study, we explore the role of Delaware as a domestic tax haven. We extend the finance and legal literatures that examine why parent firms incorporate in the state of Delaware by showing that the decision to incorporate subsidiaries in Delaware is partially driven by corporate state income tax considerations. This finding stands in contrast with those of prior research, which show that legal and governance benefits drive the market for parent incorporation location. After establishing that taxes are a factor in determining where firms locate their subsidiary operations, we quantify the effect on state effective tax rates of operating subsidiaries in Delaware. We show that firms most likely to have a Delaware-based tax strategy in place are able to reduce their state income tax burden between 15% and 24% when compared to other firms. Our results show that the state of Delaware is indeed a domestic tax haven in the sense that its corporate laws appear to enable firms to significantly reduce state income tax burdens. This reduction comes at the expense of other states and benefits Delaware via franchise taxes and fees. However, we urge caution in assigning blame solely to Delaware for its tax policies—the Delaware tax strategies discussed in this paper are effective only because of the tax policies in other states. Our findings suggest that other states may be able to mitigate lost state tax revenues attributable to Delaware-based state tax avoidance strategies by requiring combined reporting or adopting an economic nexus doctrine for state income tax nexus. Specifically, we find that firms' state tax savings related to Delaware-based state tax avoidance strategies are diminishing over time as states counteract these strategies by requiring combined reporting or invoking an economic nexus doctrine.