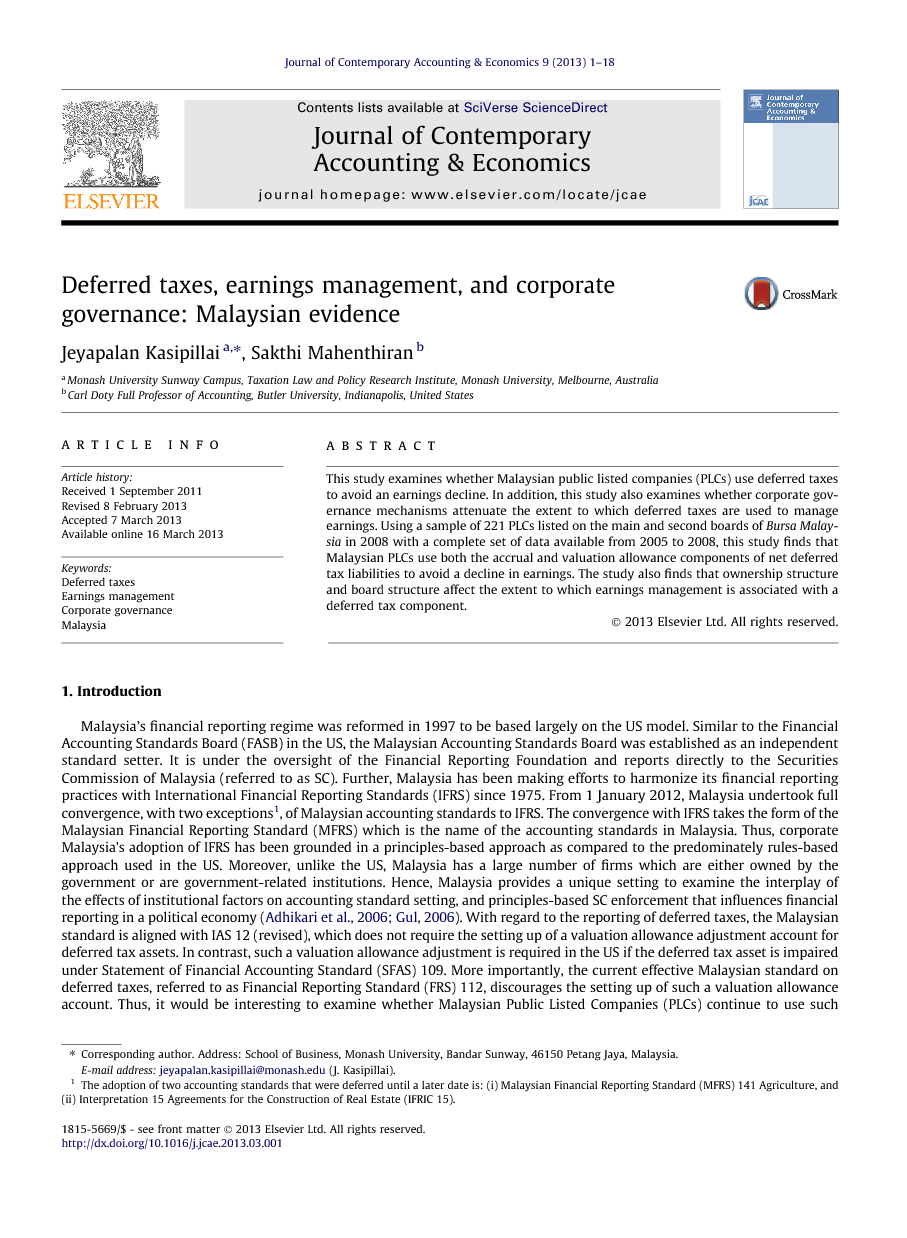 This study examines whether Malaysian public listed companies (PLCs) use deferred taxes to avoid an earnings decline. In addition, this study also examines whether corporate governance mechanisms attenuate the extent to which deferred taxes are used to manage earnings. Using a sample of 221 PLCs listed on the main and second boards of Bursa Malaysia in 2008 with a complete set of data available from 2005 to 2008, this study finds that Malaysian PLCs use both the accrual and valuation allowance components of net deferred tax liabilities to avoid a decline in earnings. The study also finds that ownership structure and board structure affect the extent to which earnings management is associated with a deferred tax component.

Phillips et al. (2003a) find that firms use deferred tax expenses for which the change in net DTL (Phillips et al., 2003b) is a proxy to avoid an earnings decline in the US. Further, two major components of DTL used by US firms to manage earnings are the component of DTL related to the accrual of revenue and expenses, and the valuation adjustment for deferred tax assets as prescribed under SFAS 109. Our study finds that Malaysian PLCs also use these two components of deferred tax liabilities to manage earnings. This finding is important because Malaysian FRS 112 for income taxes does not have the provision for the valuation allowance adjustment prescribed by FASB under SFAS 109. The International Accounting Standard IAS 12, on which the Malaysian tax standard FRS 112 is based, does not require the creation of a valuation allowance to adjust deferred tax assets when its recovery is questionable. Thus, any adjustment to asset valuations when they are impaired or subsequently re-valued is made via the valuation adjustment component of the net DTL. We find that Malaysian PLCs use EM to avoid earnings decline by manipulating pre-tax earnings related to the accrual of revenues and expenses, and by using the valuation adjustment component of the net DTL. Additionally, we find that using these components of DTL for EM activities is more likely when ownership is more concentrated and there are less independent directors on smaller boards. Further, the results show that an independent audit committee is more successful when more stringent tax regulations prescribe the rules for recovering tax losses carried forward than when accounting standards try to reduce the discretion of managers in the valuation of assets. Incorporating the ownership and board governance variables, and highlighting the implications for deferred tax accounting due to the differences between SFAS 109 and FRS 112 to avoid earnings decline, are the major contributions of our study. Studies of this nature are important in emerging capital markets because listed companies do not have financial intermediaries such as market analysts to predict earnings per share targets, and the companies themselves have corporate governance issues associated with concentrated ownership and board independence (Carcello et al., 2002 and Che Haat et al., 2008). Our paper highlights the depth of information available in listed companies’ income tax footnote disclosures and how these disclosures could be used to study local standards that are based on IFRS. We further emphasize the effectiveness of corporate governance for the enforcement of international standards. Future studies can investigate whether taxable income (with and without adjustment for deferred taxes), rather than financial reporting income, is more value-relevant after the adoption of IFRS in countries with poor investor protection.