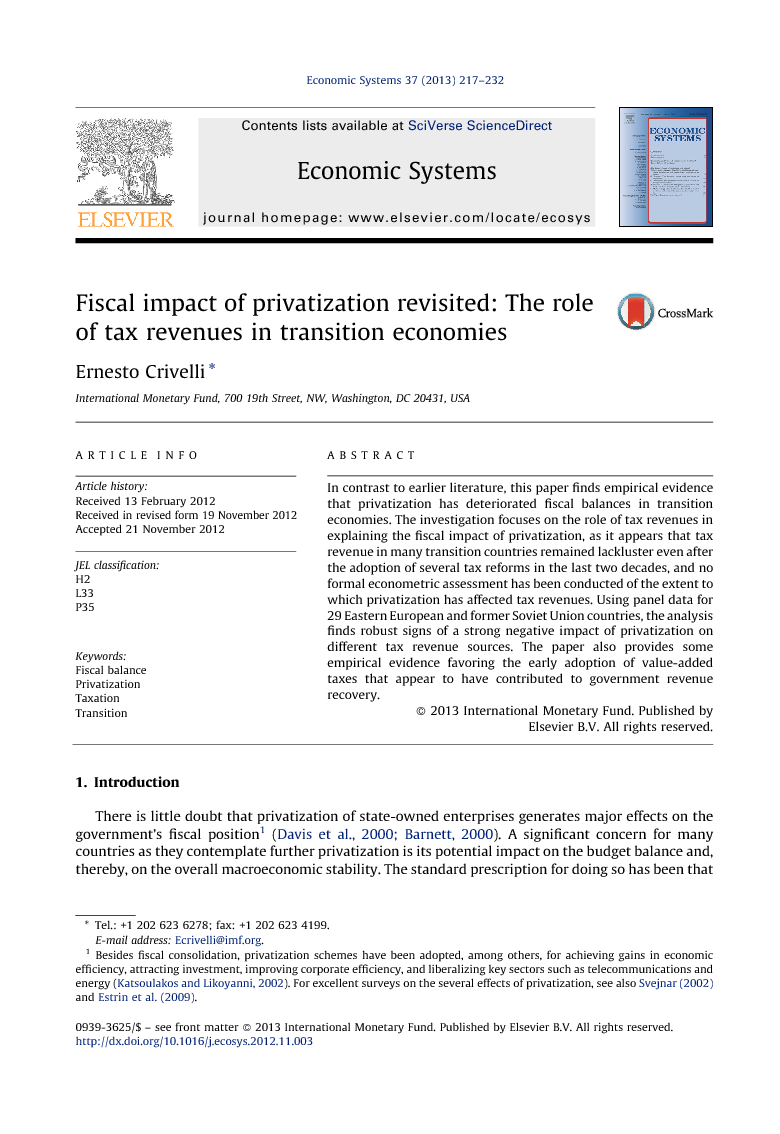 In contrast to earlier literature, this paper finds empirical evidence that privatization has deteriorated fiscal balances in transition economies. The investigation focuses on the role of tax revenues in explaining the fiscal impact of privatization, as it appears that tax revenue in many transition countries remained lackluster even after the adoption of several tax reforms in the last two decades, and no formal econometric assessment has been conducted of the extent to which privatization has affected tax revenues. Using panel data for 29 Eastern European and former Soviet Union countries, the analysis finds robust signs of a strong negative impact of privatization on different tax revenue sources. The paper also provides some empirical evidence favoring the early adoption of value-added taxes that appear to have contributed to government revenue recovery.

This paper has empirically analyzed the fiscal impact of privatization, with special focus on the extent to which the privatization process has affected tax revenue collection, and empirically assessed the magnitude of the impact on different tax revenue sources. Based on a panel of 29 transition economies during the period 1991–2010, the paper finds significant evidence confirming a deterioration of general government's budget balances associated with privatization and, in particular, the underlying hypothesis of a negative relationship between privatization and tax revenue, which is once again confirmed for the main taxes. This result appears to be robust to different estimators, the choice of alternative privatization indicators, and alternative model specifications taking into account the adoption of specific tax policy measures or institutional aspects that may have contributed to accelerating the path of tax system reform, thereby facilitating recovery of the lost revenue. Robustness to cyclically-adjusted budget balances and tax revenues has also confirmed the underlying hypothesis. The question then is whether further privatization is a cause for policy concern, as the privatization of state-owned enterprises is usually considered as an option for improving the government's fiscal position. The results here indicate that in fact the budgetary effects of privatization over time can be negative from the revenue side if tax reform is not adopted in a timely manner and the revenue administration is not consistently improved to catch up with the new challenges associated with a market-oriented economy. The use of tax policy to attract investors during and after the privatization process is also of particular importance. The widespread use of tax exemptions and preferential tax treatments has narrowed tax bases significantly. The results here do not point to any simple solution to the revenue challenges faced in replacing the loss from traditional pre-transition tax bases. Some broad evidence is provided, however, that the revenue loss may be mitigated by the timely adoption of structural tax reforms, as seems to be the case with the early adoption of value-added taxes in Eastern European countries in the run-up to enter the EU. An additional possibility is for countries to strengthen profit taxes, for example by streamlining the concession of tax incentives. While country experience has been quite diverse with the use of different strategies, it is clear that less attention has been given to the improvement of tax revenue administrations, as evidenced by the many remaining challenges faced by countries that are very advanced in the process of transition. This may prove detrimental to tax collection, since international experience (Tanzi and Tsibouris, 2000) suggests that many of the tax policy reforms have been hampered by difficulties in tax administration.