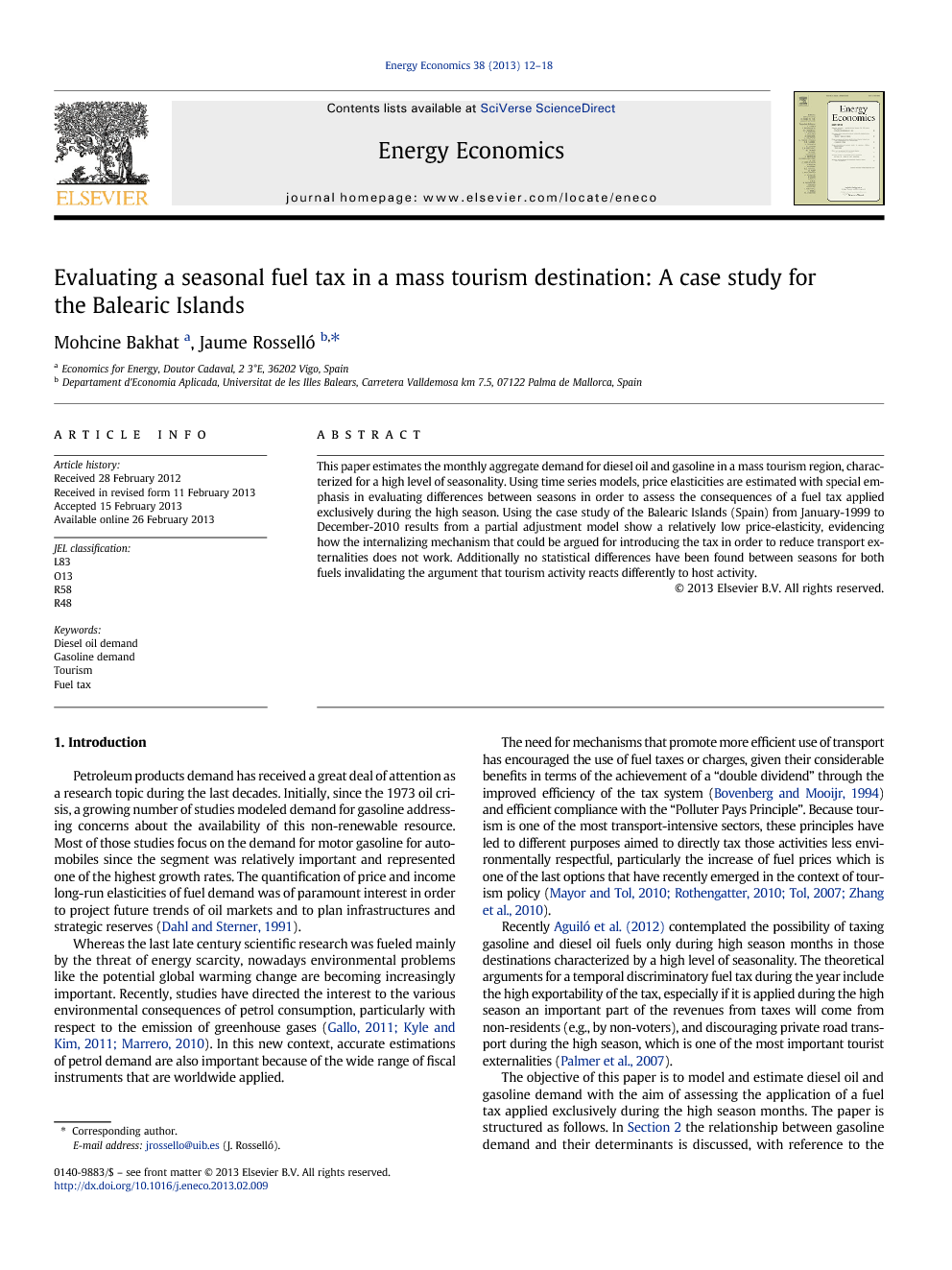 This paper estimates the monthly aggregate demand for diesel oil and gasoline in a mass tourism region, characterized for a high level of seasonality. Using time series models, price elasticities are estimated with special emphasis in evaluating differences between seasons in order to assess the consequences of a fuel tax applied exclusively during the high season. Using the case study of the Balearic Islands (Spain) from January-1999 to December-2010 results from a partial adjustment model show a relatively low price-elasticity, evidencing how the internalizing mechanism that could be argued for introducing the tax in order to reduce transport externalities does not work. Additionally no statistical differences have been found between seasons for both fuels invalidating the argument that tourism activity reacts differently to host activity.

Petroleum products demand has received a great deal of attention as a research topic during the last decades. Initially, since the 1973 oil crisis, a growing number of studies modeled demand for gasoline addressing concerns about the availability of this non-renewable resource. Most of those studies focus on the demand for motor gasoline for automobiles since the segment was relatively important and represented one of the highest growth rates. The quantification of price and income long-run elasticities of fuel demand was of paramount interest in order to project future trends of oil markets and to plan infrastructures and strategic reserves (Dahl and Sterner, 1991). Whereas the last late century scientific research was fueled mainly by the threat of energy scarcity, nowadays environmental problems like the potential global warming change are becoming increasingly important. Recently, studies have directed the interest to the various environmental consequences of petrol consumption, particularly with respect to the emission of greenhouse gases (Gallo, 2011, Kyle and Kim, 2011 and Marrero, 2010). In this new context, accurate estimations of petrol demand are also important because of the wide range of fiscal instruments that are worldwide applied. The need for mechanisms that promote more efficient use of transport has encouraged the use of fuel taxes or charges, given their considerable benefits in terms of the achievement of a “double dividend” through the improved efficiency of the tax system (Bovenberg and Mooijr, 1994) and efficient compliance with the “Polluter Pays Principle”. Because tourism is one of the most transport-intensive sectors, these principles have led to different purposes aimed to directly tax those activities less environmentally respectful, particularly the increase of fuel prices which is one of the last options that have recently emerged in the context of tourism policy (Mayor and Tol, 2010, Rothengatter, 2010, Tol, 2007 and Zhang et al., 2010). Recently Aguiló et al. (2012) contemplated the possibility of taxing gasoline and diesel oil fuels only during high season months in those destinations characterized by a high level of seasonality. The theoretical arguments for a temporal discriminatory fuel tax during the year include the high exportability of the tax, especially if it is applied during the high season an important part of the revenues from taxes will come from non-residents (e.g., by non-voters), and discouraging private road transport during the high season, which is one of the most important tourist externalities (Palmer et al., 2007). The objective of this paper is to model and estimate diesel oil and gasoline demand with the aim of assessing the application of a fuel tax applied exclusively during the high season months. The paper is structured as follows. In Section 2 the relationship between gasoline demand and their determinants is discussed, with reference to the seasonal contribution of the tourism sector. In Section 3 methodological considerations and model specification are introduced. Section 4 presents data and results. Section 5 discusses policy implications and concludes.