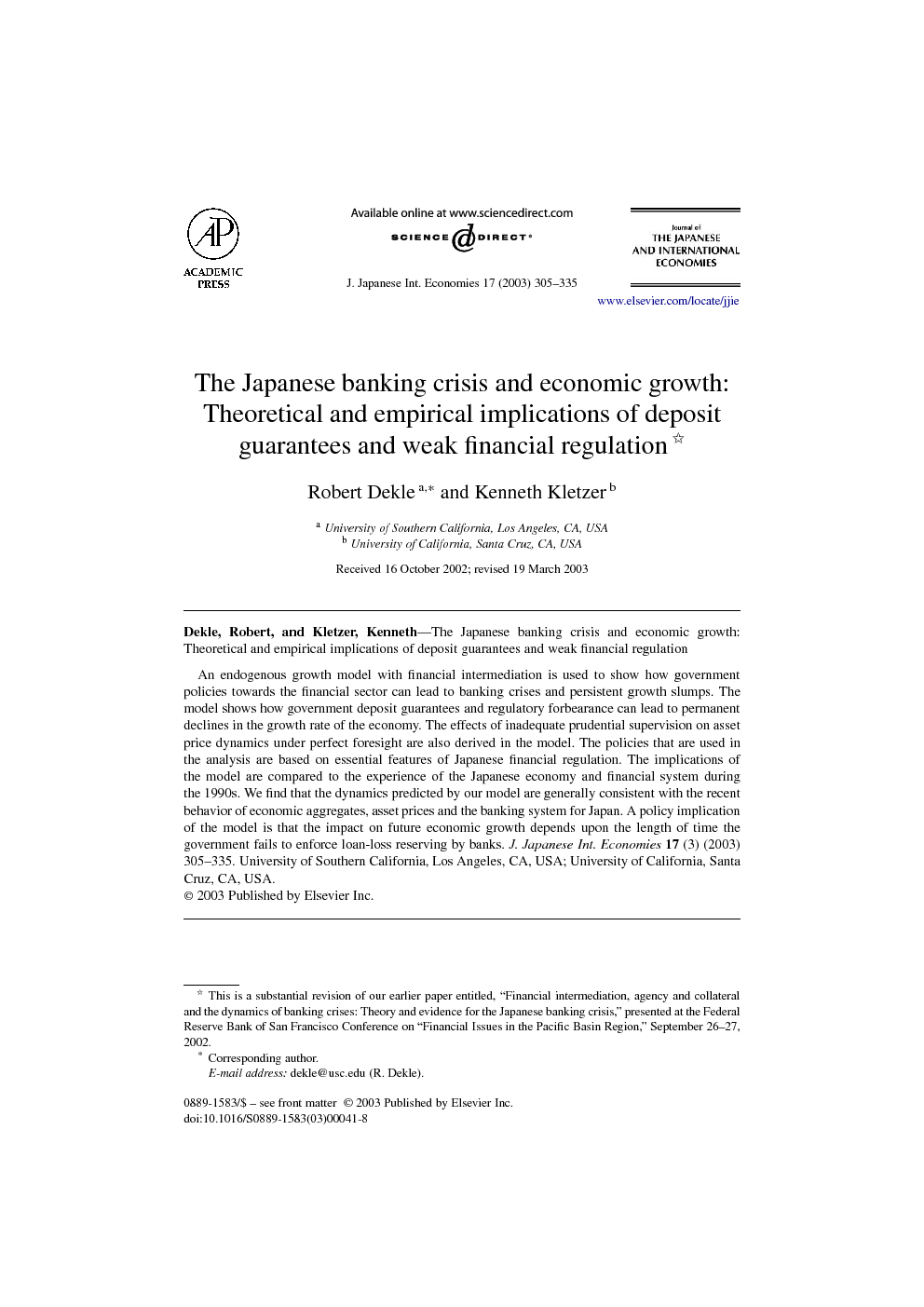 An endogenous growth model with financial intermediation is used to show how government policies towards the financial sector can lead to banking crises and persistent growth slumps. The model shows how government deposit guarantees and regulatory forbearance can lead to permanent declines in the growth rate of the economy. The effects of inadequate prudential supervision on asset price dynamics under perfect foresight are also derived in the model. The policies that are used in the analysis are based on essential features of Japanese financial regulation. The implications of the model are compared to the experience of the Japanese economy and financial system during the 1990s. We find that the dynamics predicted by our model are generally consistent with the recent behavior of economic aggregates, asset prices and the banking system for Japan. A policy implication of the model is that the impact on future economic growth depends upon the length of time the government fails to enforce loan-loss reserving by banks.

The model is stripped down to reveal the relationship between deposit guarantees, prudential supervision and economic growth that comes about when transfers to bank shareholders or depositors are financed by the public sector through future taxes. In the model, banks can effectively transfer future resources from taxpayers to shareholders through inadequately monitored government-backed deposit guarantees. A banking crisis can be interpreted as either the sudden realization of deposit insurance liabilities by authorities or a simple liquidity crisis in which banks cannot meet the withdrawal demands of depositors due to irreversible investment.19 The qualitative dynamics for the growth rates of gross domestic product, investment, consumption and stock market values for the model compare very well to the Japanese experience of the 1990s. Our analysis of how deposit insurance liabilities affect economic growth emphasizes a simple policy failure. If the government required banks to hold loan-loss reserves against accumulations of non-performing assets, the banks would not have the ability (hence, incentive) to accumulate deposit insurance claims against the public sector. The model also shows that the longer the government waits to intervene in the banking sector and stop the accumulation of unrealized deposit insurance liabilities, the lower the long-run growth rate that results. It can also be shown easily that letting the deposit insurance cost of the crisis accumulate after the crisis lowers the long-run growth rate in our representative agent model. The model supports the serious implementation of Prompt Corrective Action by the Japanese government at any time. In the representative agent model, shareholders and depositors are identical. Deposit insurance under regulatory failure affects economic growth because deposit insurance liabilities are paid by taxes on the interest earned by depositors. An alternative approach would be to use an overlapping generations model so that the transfer scheme redistributes from future generations to current households, even with lump-sum taxation. This approach is taken by Barseghyan (2002), but with two-period lifetimes, many of the dynamics of our model are lost. In an earlier paper, Dekle and Kletzer (2002a), we explore the consequences of expected government bailouts of depositors, implicit or explicit, with weak prudential supervision in an agency-based model of bank-centered financial intermediation. The first version of this paper (Dekle and Kletzer, 2002b) elaborated that model and applied it to the Japanese context. In that agency model, self-financing of a portion of corporate investment by a firm's shareholders reduces the risk of low productivity performance. With limited liability and deposit insurance, banks have incentives to renegotiate loans when current interest cannot be paid. In the process of doing so, the riskiness of a firm's investment rises as self-financing declines in proportion to the firm's capital. Over time, the growth rate of non-performing assets rises over time. The agency model can be added to the current model to include the extra dynamics of non-performing asset accumulation by banks discussed in our previous papers.