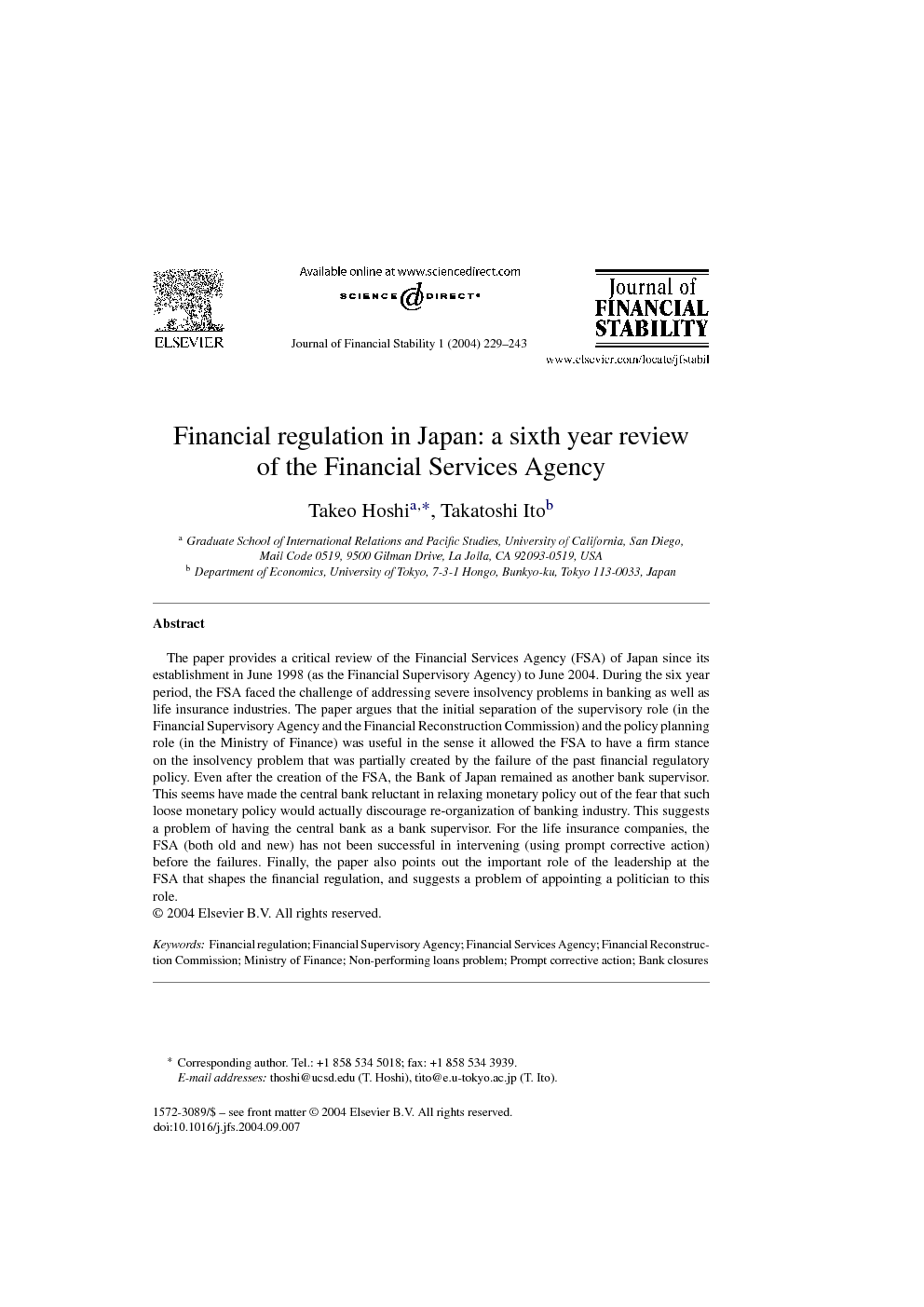 The paper provides a critical review of the Financial Services Agency (FSA) of Japan since its establishment in June 1998 (as the Financial Supervisory Agency) to June 2004. During the six year period, the FSA faced the challenge of addressing severe insolvency problems in banking as well as life insurance industries. The paper argues that the initial separation of the supervisory role (in the Financial Supervisory Agency and the Financial Reconstruction Commission) and the policy planning role (in the Ministry of Finance) was useful in the sense it allowed the FSA to have a firm stance on the insolvency problem that was partially created by the failure of the past financial regulatory policy. Even after the creation of the FSA, the Bank of Japan remained as another bank supervisor. This seems have made the central bank reluctant in relaxing monetary policy out of the fear that such loose monetary policy would actually discourage re-organization of banking industry. This suggests a problem of having the central bank as a bank supervisor. For the life insurance companies, the FSA (both old and new) has not been successful in intervening (using prompt corrective action) before the failures. Finally, the paper also points out the important role of the leadership at the FSA that shapes the financial regulation, and suggests a problem of appointing a politician to this role.

The new framework for the financial regulation in Japan was established in June 1998 by separating the supervision and examination function from the MOF. The separation of the financial supervision from the MOF as the fiscal authority made it possible for the old FSA to close insolvent banks without worrying so much about making fiscal liability of banking problem explicit. Moreover, the old FSA did not have planning function of financial regulation. The separation of planning function and supervision function made the old FSA less hesitant in closing down insolvent financial institutions, because they did not have to worry about a possible embarrassment to those who designed the ex ante rules and regulation. Under the new FSA, which started in July 2000, both planning and supervision functions are housed in the same organization. This seems to have made the FSA more cautious about closing insolvent banks. Another problem of the design of the financial regulatory structure can be found in that the central bank was allowed to remain an important bank supervisor. This seems to have caused the BOJ to be reluctant in relaxing monetary policy so that re-organization in the banking industry is not discouraged. The deflation continued and that made the FSA reluctant in dealing with the non-performing loan issue in a decisive manner. The FSA (both old and new) never seems to have tried aggressively to limit the failure of insurance companies. Prompt corrective action was ordered only on one occasion. Even in this case, the intervention was not successful in reducing the cost of the failure. Double-gearing between mutual life insurers and banks is a serious problem, but the FSA has not actively tried to limit the practice. In this sense, the FSA has not used its potential to be a comprehensive regulator of financial conglomerates. Another point of consideration is whether it makes economic sense to have a politician as the head of the FSA. When a failure of a bank is expected to cause bankruptcy of large companies in a particular region, politicians from that region would put political pressure on the FSA to adopt forbearance policy. Whether the head of the FSA can resist such a pressure depends on strength of the person. Whether this is an economically optimal institutional arrangement should be examined in the future. The FSA under Takenaka, who was not a politician when he became the minister, was far more successful in dealing with the non-performing loan problem.