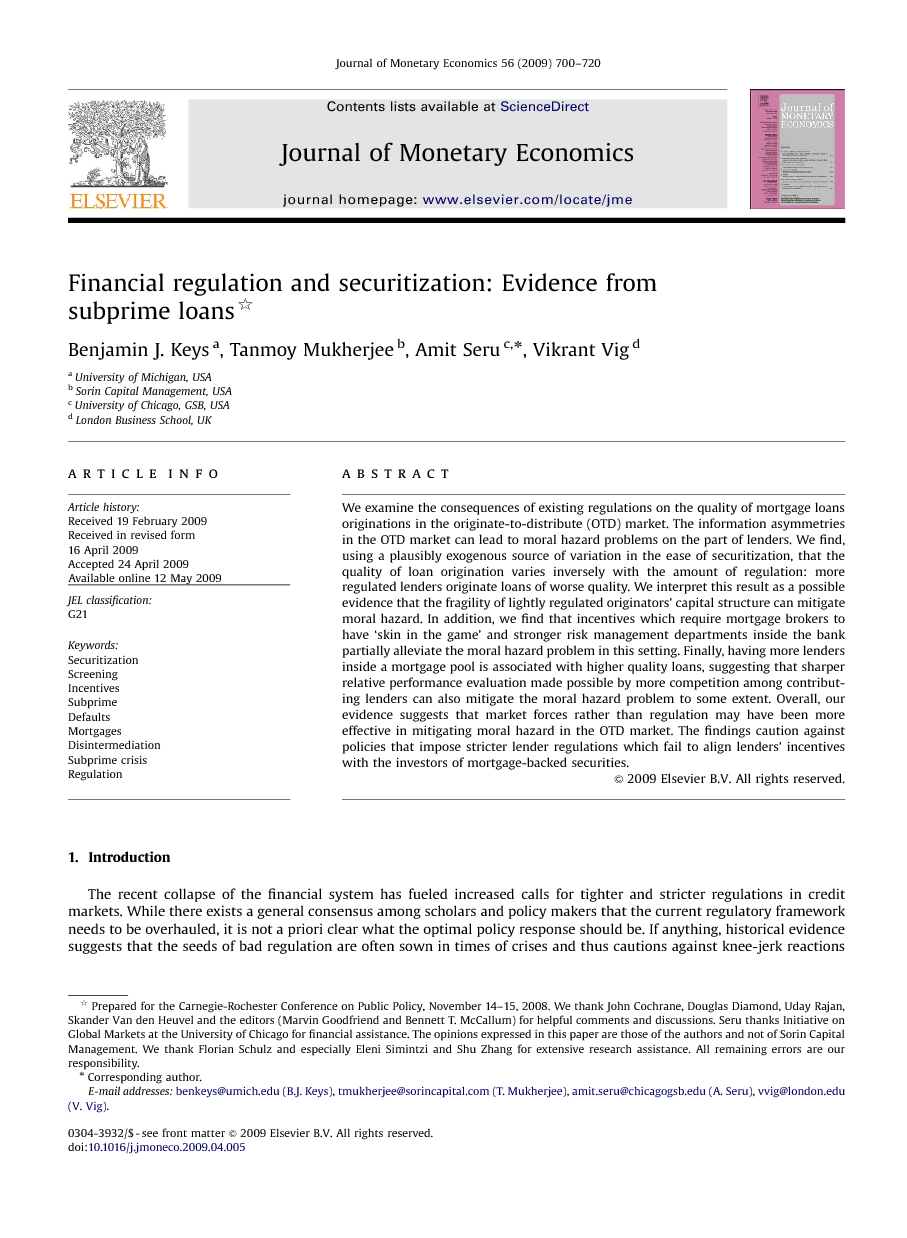 We examine the consequences of existing regulations on the quality of mortgage loans originations in the originate-to-distribute (OTD) market. The information asymmetries in the OTD market can lead to moral hazard problems on the part of lenders. We find, using a plausibly exogenous source of variation in the ease of securitization, that the quality of loan origination varies inversely with the amount of regulation: more regulated lenders originate loans of worse quality. We interpret this result as a possible evidence that the fragility of lightly regulated originators’ capital structure can mitigate moral hazard. In addition, we find that incentives which require mortgage brokers to have ‘skin in the game’ and stronger risk management departments inside the bank partially alleviate the moral hazard problem in this setting. Finally, having more lenders inside a mortgage pool is associated with higher quality loans, suggesting that sharper relative performance evaluation made possible by more competition among contributing lenders can also mitigate the moral hazard problem to some extent. Overall, our evidence suggests that market forces rather than regulation may have been more effective in mitigating moral hazard in the OTD market. The findings caution against policies that impose stricter lender regulations which fail to align lenders’ incentives with the investors of mortgage-backed securities.

The current financial crisis has prompted widespread calls for tougher regulation of financial markets and market participants. This paper contributes to the current debate on optimal regulation in the context of securitization. In doing so, we take a positive rather than a normative approach to regulation analysis as we examine the consequences of existing regulations on the quality of loans originated in the OTD market. The challenge in understanding how regulation interacts with the performance of lenders in the OTD market lies with the endogeneity of the securitization decision by lenders. We overcome these concerns by exploiting a rule of thumb in the lending market which induces exogenous variation in the ease of securitization of a loan compared to a loan with similar characteristics. The empirical strategy then evaluates the performance of a lender's portfolio around the ad-hoc credit threshold as a measure of moral hazard in the OTD market and examines how it is affected by different attributes of regulation and incentives. Comparing the performance of loans originated by highly regulated banks with less regulated independent mortgage institutions, we find that banks originated lower quality loans as compared to independents. This is contrary to the popular view that has put primary blame of low quality originations on the less regulated lenders. These results caution against any policy that imposes stricter regulation on the lenders purely for the sake of additional regulation, rather than aligning the lenders’ incentives with the investors of mortgage-backed securities. At the same time, it is well known that a majority of independent lenders exited the market as the crisis unfolded, primarily on account of not being able to absorb losses. However, the fragility of these lenders’ capital structure, as demonstrated by their inability to raise additional short-term funds to absorb losses, was perhaps also what kept moral hazard by these lenders in check. While external regulation may not have provided the expected impact on the performance of loans, we investigate whether the internal incentives provided by firms could have mitigated moral hazard problems. Examining the executive pay structure of banks, we do not find any relationship between the quality of loan originations and top management incentives. This seems quite reasonable given the high powered incentive component in the salaries of top executives across most of the lenders in the subprime market. For example, in March 2008, Jim Cayne, the CEO of Bear Stearns, sold his five million shares in the company for 10.84 USD after his personal wealth had fallen by 425 million dollars in one month. It is difficult for us to envisage that an even bigger stake in the firm could have produced the ‘correct’ incentives. Interestingly, however, our results suggest that power dynamics inside the firm might have a role to play in aligning incentives. In particular, we find that a proxy of relative power of the risk manager is associated with loans that have lower default rates. We interpret this result as suggesting that the moral hazard problem is less severe for lenders in which the risk management department has greater bargaining power within the firm. Our results also speak to calls for regulations to mandate competition among participants. There has been a widespread belief that competition over market share among mortgage lenders and brokers led to increased risk taking and reduced lending standards in a ‘race to the bottom.’ On the one hand, we find some evidence that supports this conjecture: stronger state level brokerage laws have been found to be associated with lower competition (see Kleiner and Todd, 2007), and we find better quality of OTD loans in these states. On the other hand, we also find that more lenders inside a pool are associated with better quality of loans originated. These results suggest that more competition among participants can help improve relative performance evaluation and mitigate the moral hazard problem to some extent. Finally, some of our results suggest that appropriate incentives for the originators (brokers) may help to attenuate the moral hazard problem. For instance, regulation that requires brokers to have ‘skin in the game’ does indeed help curb the moral hazard problem. Pushing this further, one can argue that policies which require originators to hold some risk have the potential to reduce the moral hazard problem. Implementing these policies would require making information on what loans the originator and the securitizer hold available to various market participants. This we feel is an important aspect that policy makers need to consider as they draft improved OTD-related disclosure policies. We refrain from making any welfare claims based on the results presented here. The starting point of our analysis is that securitization creates a moral hazard problem, which has been well documented in the literature. By evaluating different regulations in the context of this moral hazard problem, we are able to assess the impact of regulation as different market participants were differentially regulated. What do our findings have to say on how regulation should be changed in the OTD market? The objective of the new regulatory structure should be to make markets function better and provide appropriate incentives for market participants to reduce principal-agent problems. The answer, therefore, is not necessarily more government intervention but better government intervention. By providing evidence which suggests that market forces rather than regulation may have been more effective in mitigating moral hazard in the OTD market, our research marks a first step toward answering this question.