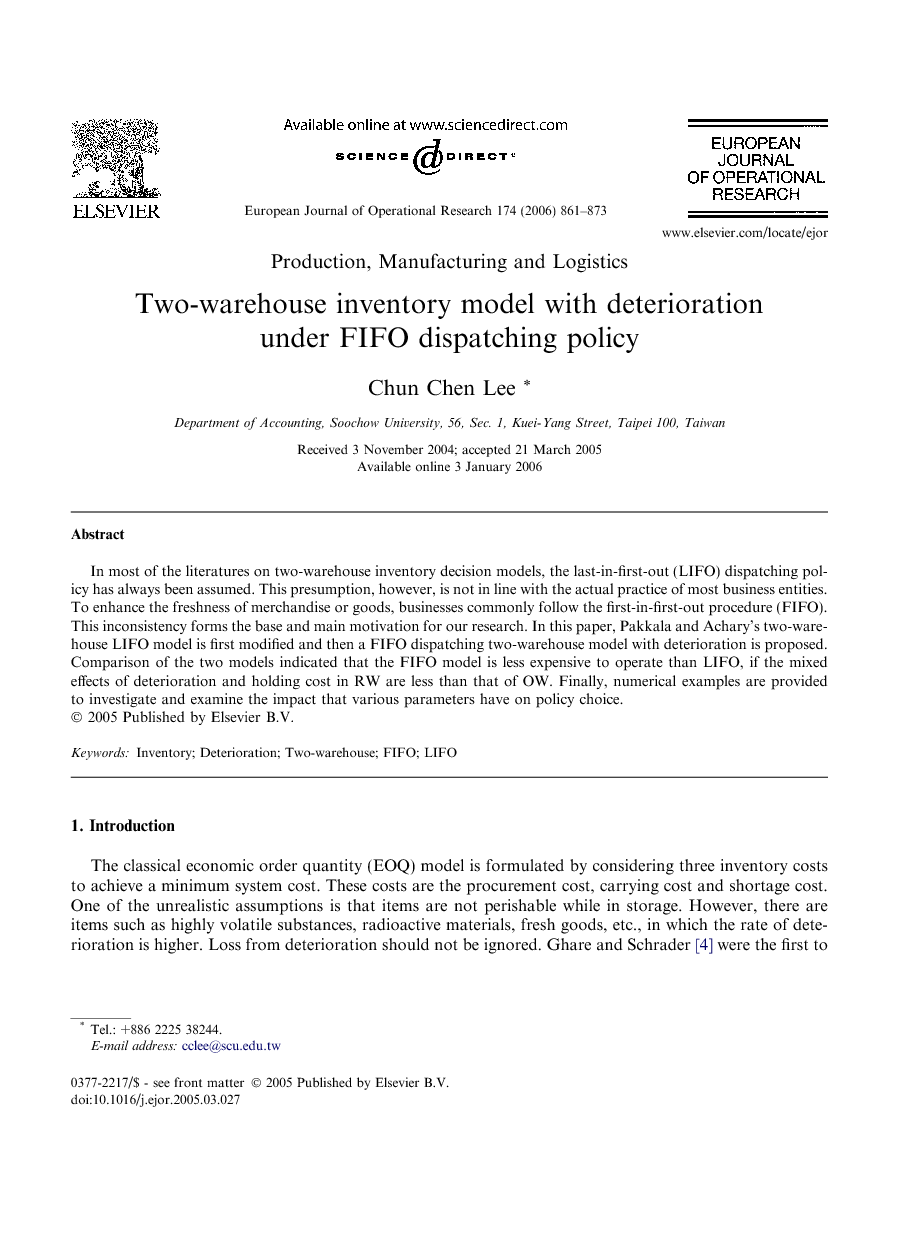 In most of the literatures on two-warehouse inventory decision models, the last-in-first-out (LIFO) dispatching policy has always been assumed. This presumption, however, is not in line with the actual practice of most business entities. To enhance the freshness of merchandise or goods, businesses commonly follow the first-in-first-out procedure (FIFO). This inconsistency forms the base and main motivation for our research. In this paper, Pakkala and Achary’s two-warehouse LIFO model is first modified and then a FIFO dispatching two-warehouse model with deterioration is proposed. Comparison of the two models indicated that the FIFO model is less expensive to operate than LIFO, if the mixed effects of deterioration and holding cost in RW are less than that of OW. Finally, numerical examples are provided to investigate and examine the impact that various parameters have on policy choice.

The classical economic order quantity (EOQ) model is formulated by considering three inventory costs to achieve a minimum system cost. These costs are the procurement cost, carrying cost and shortage cost. One of the unrealistic assumptions is that items are not perishable while in storage. However, there are items such as highly volatile substances, radioactive materials, fresh goods, etc., in which the rate of deterioration is higher. Loss from deterioration should not be ignored. Ghare and Schrader [4] were the first to consider issues regarding on-going deterioration of inventory. Since then, research for deterioration of inventory has been extensively examined by many researchers from time to time. Raafat [14] and Goyal and Giri [6] have made excellent reviews of these models. In various situations, the degree of deterioration depends on the preservation of inventory in the facility and its environmental conditions which are available in the warehouse. An interesting research topic incorporating deterioration effect in inventory decision involves the situations in which there are two storage facilities. Sarma [15] is the first to discuss the two-warehouse inventory model with deterioration. In his model, a single inventory item is first stored in the owned warehouse (OW), with limited capacity, and any additional quantity to be stored in the rented warehouse (RW). An infinite replenishment rate is considered in this model with uniform scheduling period and shortage allowance. Other authors, e.g. Benkherouf [2], Bhunia and Maiti [3], Goswami and Ghaudhuri [5], and Lee and Ma [8] proposed the two-warehouse models when demand is a function of time either with or without the consideration of deterioration. Pakkala and Achary [10] extended Sarma’s model to the case of finite replenishment rate with shortage. All of the above mentioned research models are commonly referred to as continue release model, assuming that inventory is to be released directly and continuously in each warehouse. Murdeshwar and Sathe [9], Pakkala and Achary [11] considered bulk release model which inventory in RW must first be transferred to OW before its release to the customer. It is generally assumed that the RW offers better preserving facilities than the OW, therefore it charges a higher holding cost. The two-warehouse models discussed above naturally adopt the LIFO (last-in-first-out) inventory flow. Under such circumstances, inventories are first stored in OW with overflows going to RW. But when retrieving for consumption, it is always from RW when available before retrieving from OW. However, we believe such rule needs to be further investigated when applying to a real world situation. First, in the RW, particular in a public warehouse, a professional vendor who specializes in the warehousing operation would carry a lower operating cost due to well equipped set ups, learning effect of trained worker, and the economics of scale from high volume. Second, as competition increases between warehouse facilities in real world, their ability to offer valued added service with completive lower price is becoming more and more necessary. Many businesses have gotten into or expanded their use of public warehouse because of cheap shipping or other financial reasons (Anonymous, [1]). Finally, a critical point of inventory decision for perishable products, to allow later stored inventory in RW to be dispatched last means a greater risk of deterioration of inventory. The cost of deteriorated inventory and related opportunity cost may far exceed the cost saving benefit derived from the warehouse rent. In the real world, maintaining a FIFO rule of inventory flow has been the common practice of most managers. In fact, Pierskalla and Roach [12] have shown that a FIFO issuing policy is optimal for perishable and deteriorating inventories in a single warehouse setting with unlimited capacity. In this paper, Pakkala and Achary’s [10] LIFO model with finite replenishment rate will be reconsidered. We propose a FIFO two-warehouse model that inventory in OW, which is stored first, will be consumed before those in RW based on the above considerations that the true holding cost in RW is not necessarily higher than in OW. Before making comparisons between the two models, in Section 3.1, we made a modification to Pakkala and Achary’s model to allow their model to be more complete. Furthermore, the proposed assumption of a predetermined cycle time will also be relaxed to a more general approach which is to let cycle time be part of decision and to determine both order level and backorder level simultaneously. In the final section, various parameter analyses are implemented to examine the impact on policy choice.

Previous literature on two-warehouse inventory model has always assumed that inventory holding cost in RW is higher than OW. This resulted in a LIFO flow of inventory that items in RW must be consumed prior to OW to avoid higher holding cost. This assumption is not necessarily true in the real world because RW is a specialized operation faced with severe competition that the opportunity to gain lower holding cost than OW is higher. Most important for managers that deal with perishable products using FIFO, rather than LIFO, is a common accepted practice of making sure that the products are dispatched at its maximum freshness. In this paper, a two-warehouse inventory model with the FIFO dispatching policy for deteriorating inventory items was proposed. It has been proven that when deterioration rate is the same in the two warehouses, FIFO is less expensive than LIFO provided that holding cost in RW will be lower than OW. In addition, Pakkala and Achary’s two-warehouse LIFO model has been sufficiently modified to be more complete. The modified LIFO model has proven to have a lower cost than Pakkala and Achary’s model under their assumption that H < F, when α is not significantly less than β. Numerical analysis have indicated {α, β, H, F} are the key set of factors in choosing LIFO or FIFO. Particularly, when RW parameters {β, F} are superior to that of OW {α, H}, in this case FIFO would be employed rather than LIFO. From the analysis, it was pointed out that TCL is more sensitive to a change in H than a change in F, and to the contrary, TCF is more sensitive to a change in F. Other parameters such as {P, D, W, C1, C2, C3} would have impacted solely on the magnitude but not in the directions between the two policies.