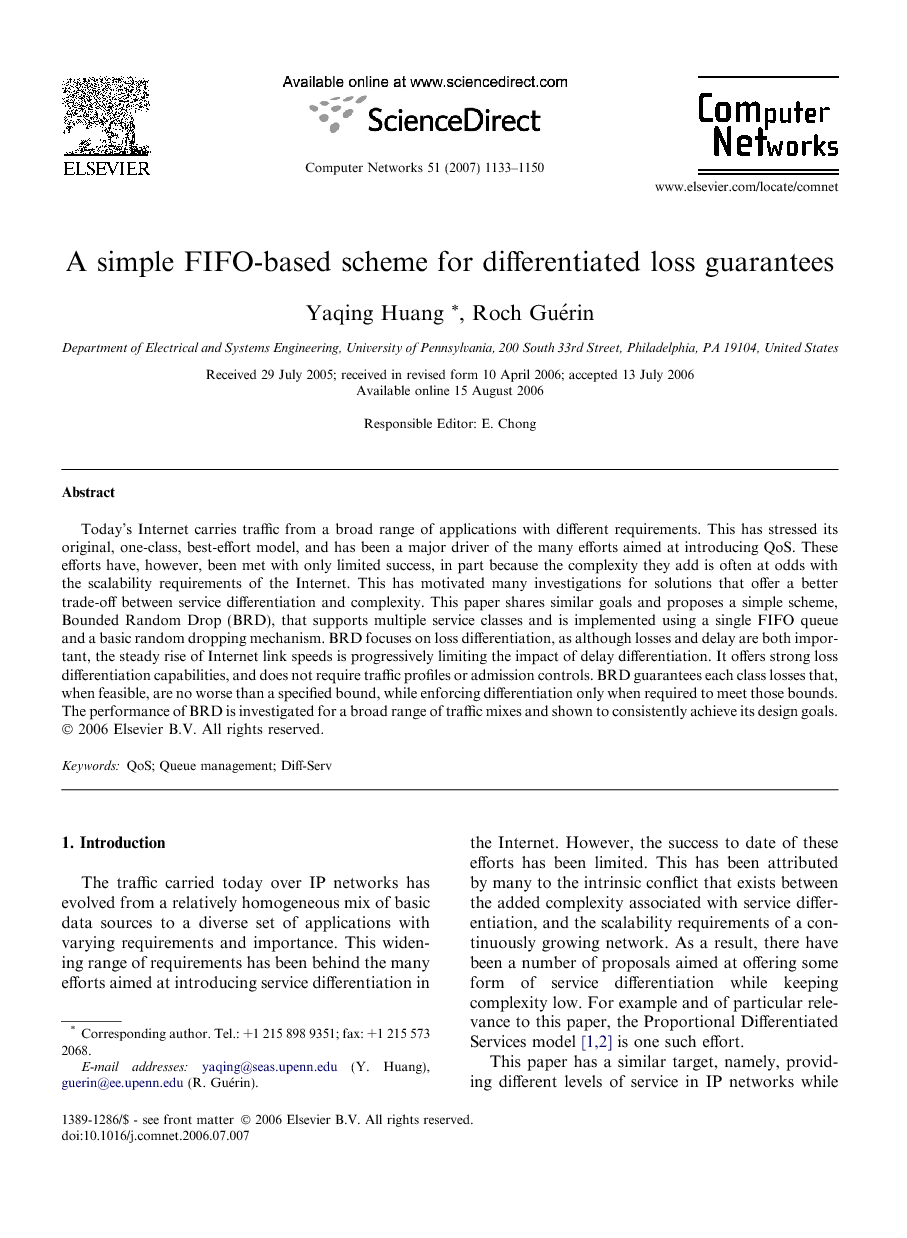 Today’s Internet carries traffic from a broad range of applications with different requirements. This has stressed its original, one-class, best-effort model, and has been a major driver of the many efforts aimed at introducing QoS. These efforts have, however, been met with only limited success, in part because the complexity they add is often at odds with the scalability requirements of the Internet. This has motivated many investigations for solutions that offer a better trade-off between service differentiation and complexity. This paper shares similar goals and proposes a simple scheme, Bounded Random Drop (BRD), that supports multiple service classes and is implemented using a single FIFO queue and a basic random dropping mechanism. BRD focuses on loss differentiation, as although losses and delay are both important, the steady rise of Internet link speeds is progressively limiting the impact of delay differentiation. It offers strong loss differentiation capabilities, and does not require traffic profiles or admission controls. BRD guarantees each class losses that, when feasible, are no worse than a specified bound, while enforcing differentiation only when required to meet those bounds. The performance of BRD is investigated for a broad range of traffic mixes and shown to consistently achieve its design goals.

The traffic carried today over IP networks has evolved from a relatively homogeneous mix of basic data sources to a diverse set of applications with varying requirements and importance. This widening range of requirements has been behind the many efforts aimed at introducing service differentiation in the Internet. However, the success to date of these efforts has been limited. This has been attributed by many to the intrinsic conflict that exists between the added complexity associated with service differentiation, and the scalability requirements of a continuously growing network. As a result, there have been a number of proposals aimed at offering some form of service differentiation while keeping complexity low. For example and of particular relevance to this paper, the Proportional Differentiated Services model [1] and [2] is one such effort. This paper has a similar target, namely, providing different levels of service in IP networks while introducing minimum additional complexity. We expand later on the various aspects of complexity when implementing service differentiation, but it broadly consists of implementation, deployment, and management complexity. Our goal is to develop a solution that while effective at enforcing different levels of service, introduces minimal added complexity along all above three dimensions and can be deployed incrementally in the network. Specifically, we are targeting a solution that from an implementation complexity perspective, requires little more than a simple FIFO queue. As we shall see, the only addition we consider is in the form of a random drop decision logic through which the different levels of service are enforced. This random drop logic calls for the a priori configuration of a single parameter for each offered service class, so that deployment complexity is also kept to a minimum. Finally, the system automatically adapts to the level of traffic in the different service classes, without the need for interactions between users and the network besides the a priori identification of the service class to which an user belongs. In other words, there is no need for active management of resources. The mechanism we propose, called Bounded Random Drop (BRD), focuses on loss differentiation. There are two major sources of impairment in IP networks, packet loss, and queuing delay. Both are caused by network congestion that arises when the incoming traffic exceeds the network resources, i.e., link bandwidth and buffer space. However, over the last few years the speed of network links, including access links, has been steadily rising at a pace that exceeds that of the growth in buffer size [3]. As a result, the relative contribution of queueing delays to the end-to-end delay has been regularly decreasing. In contrast, losses are unaffected by the higher speed as they remain a function of the network load. This does not mean that delay has become irrelevant and that only losses matter, but points to losses as the increasingly dominant metric. This is the main motivation behind our focus on losses. Specifically, the paper investigates the possibility of providing per-hop differentiated loss guarantees without upstream policing, knowledge of traffic profiles, or exchange of signalling messages. The choice of per-hop guarantees, as opposed to end-to-end guarantees, is again motivated by our goal of minimum complexity and by the fact that most flows typically encounter only a few bottlenecks on their path. As a result, BRD per hop guarantees on bottleneck links should offer a reasonable approximation of end-to-end guarantees. There have been a number of previous works that share similar goals as ours. Several of these works originated from the proportional differentiated services model proposed in [1], [2] and [4], and therefore share similar limitations in both performance and implementation complexity. More specifically, they focus primarily on long-term average loss performances and typically require more complicated implementations than what we consider in this paper. We will discuss these related schemes, particularly the schemes proposed in [5], [6], [7], [8] and [9], and illustrate the differences that exist between them and our scheme in Sections 3 and 5.1. The main contributions of this work are in proposing a simple FIFO-based scheme, BRD, that is effective at enforcing loss differentiation, and can be deployed relatively easily. BRD will gradually improve the overall loss performances if it is incrementally deployed across the network. The rest of the paper is organized as follows: Section 2 articulates more precisely the goals and requirements of BRD. Section 3 reviews a number of other works that share to different degrees some of our goals and discusses major differences. Section 4 is devoted to a more formal description of the algorithm on which BRD relies, while Section 5 evaluates BRD’s performance through simulations.

In this paper, we investigated the feasibility of providing strong loss differentiation at a low added cost. We proposed a new scheme called BRD that provides a relative service quality order across traffic classes. BRD guarantees each class losses that, when feasible, are no worse than a specified bound, and it enforces differentiation only when required to meet those bounds. This is achieved using a single FIFO queue and a simple random dropping mechanism. We believe that because of its narrower focus, BRD offers several advantages over previous comparable schemes, such as JoBS and PractQoS. From a performance perspective, BRD is capable of providing both long-term and short-term loss guarantees by relying on directly estimating the arrival rates. In contrast, as illustrated in Section 5.1, there are scenarios where JoBS and PractQoS exhibit significant deviations from the desired short-term loss guarantees. We believe that this is in part caused by their reliance on the loss process itself as the base for making dropping decisions. From a complexity standpoint, the multi-queue structure of both JoBS and PractQoS, while justifiable in the context of their broader goals, introduces additional complexity when compared to the single FIFO queue on which BRD relies. Through simulations, we showed that BRD delivers consistent loss guarantees across a broad range of traffic mixes. In particular, we saw that when compared to a simple priority scheme, BRD delivers a similar level of protection to high priority traffic without unnecessarily penalizing lower priority traffic. We hope that this paper demonstrates that a scheme such as BRD can provide meaningful service differentiation at a relatively low cost.