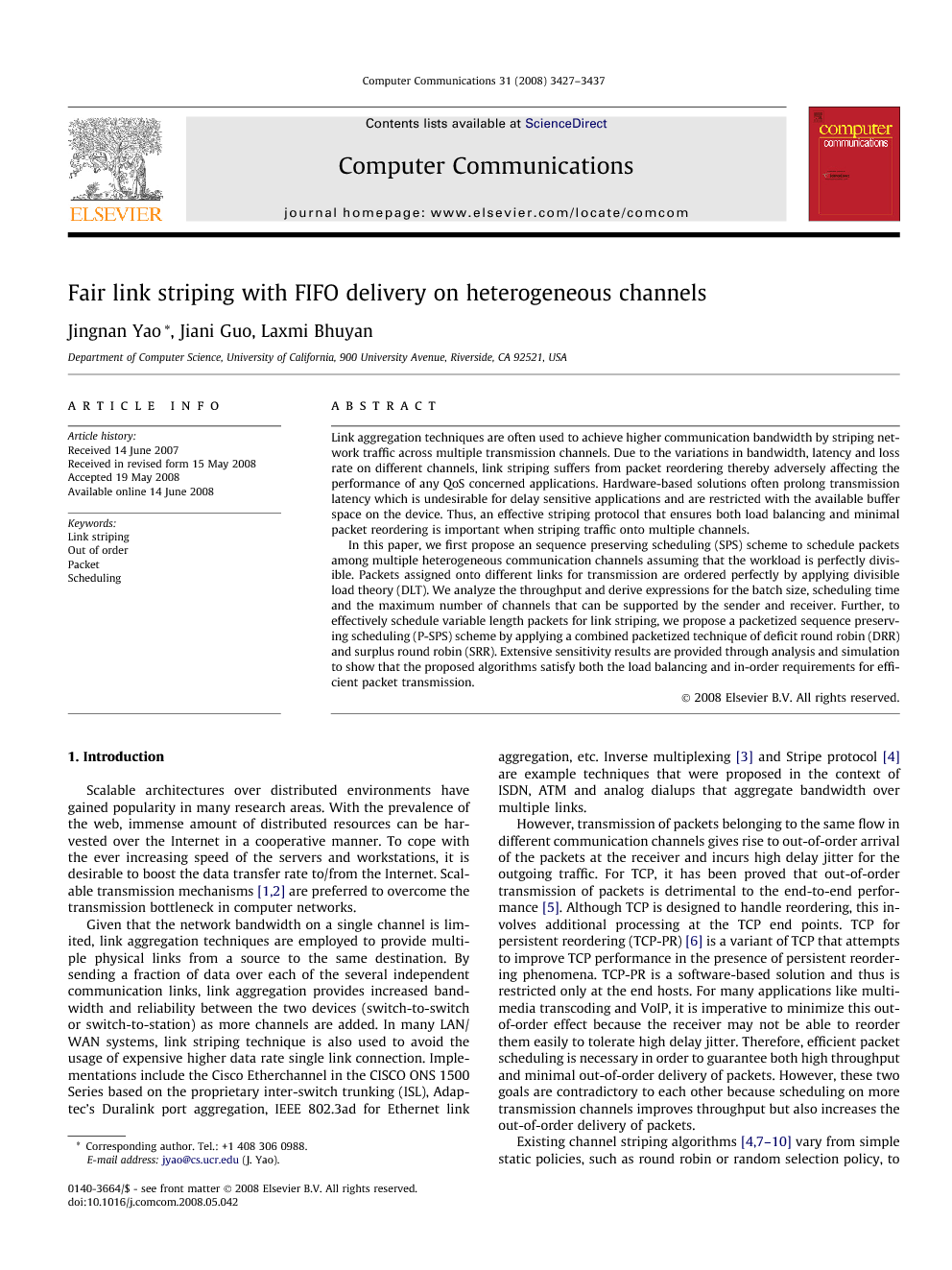 Link aggregation techniques are often used to achieve higher communication bandwidth by striping network traffic across multiple transmission channels. Due to the variations in bandwidth, latency and loss rate on different channels, link striping suffers from packet reordering thereby adversely affecting the performance of any QoS concerned applications. Hardware-based solutions often prolong transmission latency which is undesirable for delay sensitive applications and are restricted with the available buffer space on the device. Thus, an effective striping protocol that ensures both load balancing and minimal packet reordering is important when striping traffic onto multiple channels. In this paper, we first propose an sequence preserving scheduling (SPS) scheme to schedule packets among multiple heterogeneous communication channels assuming that the workload is perfectly divisible. Packets assigned onto different links for transmission are ordered perfectly by applying divisible load theory (DLT). We analyze the throughput and derive expressions for the batch size, scheduling time and the maximum number of channels that can be supported by the sender and receiver. Further, to effectively schedule variable length packets for link striping, we propose a packetized sequence preserving scheduling (P-SPS) scheme by applying a combined packetized technique of deficit round robin (DRR) and surplus round robin (SRR). Extensive sensitivity results are provided through analysis and simulation to show that the proposed algorithms satisfy both the load balancing and in-order requirements for efficient packet transmission.

In this paper, we proposed an efficient packet scheduling algorithm P-SPS for a heterogeneous link striping system. P-SPS is capable of scheduling variable length packets among a group of heterogeneous channels to ensure both load balancing and minimal out-of-order packet delivery. P-SPS is based on the SPS algorithm, which we developed from rigorous theoretical derivation by assuming the workload is perfectly divisible. Several important theoretical results were presented in the paper for SPS algorithm. Extensive sensitivity results are provided through analysis and simulation to show that the proposed algorithms satisfy both the load balancing and in-order requirements for packet transmission. In order to minimize the performance discrepancy between SPS and P-SPS, we are working on a new packetized technique to better address the problem of variable packet length.