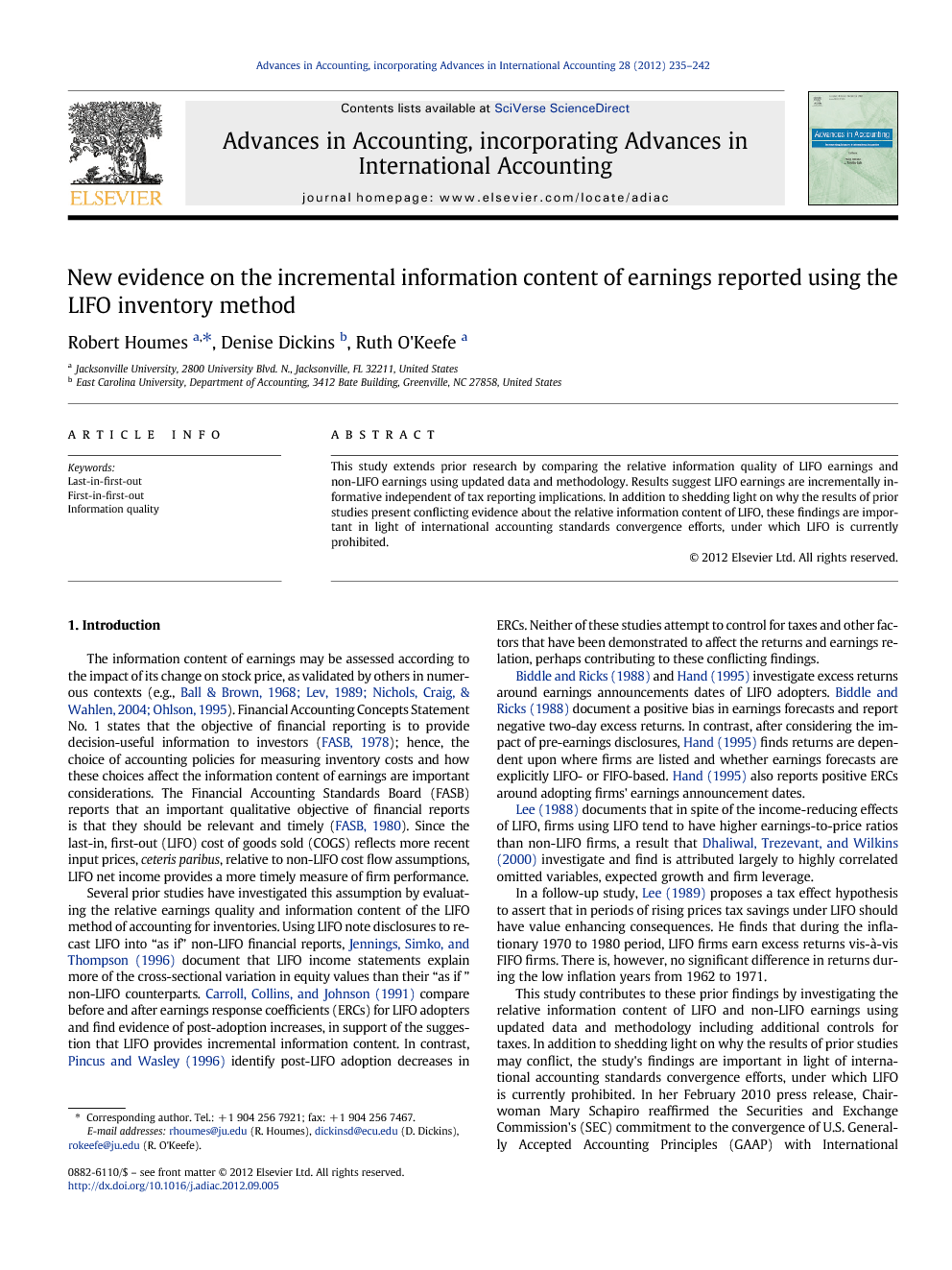 This study extends prior research by comparing the relative information quality of LIFO earnings and non-LIFO earnings using updated data and methodology. Results suggest LIFO earnings are incrementally informative independent of tax reporting implications. In addition to shedding light on why the results of prior studies present conflicting evidence about the relative information content of LIFO, these findings are important in light of international accounting standards convergence efforts, under which LIFO is currently prohibited.

The information content of earnings may be assessed according to the impact of its change on stock price, as validated by others in numerous contexts (e.g., Ball and Brown, 1968, Lev, 1989, Nichols et al., 2004 and Ohlson, 1995). Financial Accounting Concepts Statement No. 1 states that the objective of financial reporting is to provide decision-useful information to investors (FASB, 1978); hence, the choice of accounting policies for measuring inventory costs and how these choices affect the information content of earnings are important considerations. The Financial Accounting Standards Board (FASB) reports that an important qualitative objective of financial reports is that they should be relevant and timely (FASB, 1980). Since the last-in, first-out (LIFO) cost of goods sold (COGS) reflects more recent input prices, ceteris paribus, relative to non-LIFO cost flow assumptions, LIFO net income provides a more timely measure of firm performance. Several prior studies have investigated this assumption by evaluating the relative earnings quality and information content of the LIFO method of accounting for inventories. Using LIFO note disclosures to recast LIFO into “as if” non-LIFO financial reports, Jennings, Simko, and Thompson (1996) document that LIFO income statements explain more of the cross-sectional variation in equity values than their “as if ” non-LIFO counterparts. Carroll, Collins, and Johnson (1991) compare before and after earnings response coefficients (ERCs) for LIFO adopters and find evidence of post-adoption increases, in support of the suggestion that LIFO provides incremental information content. In contrast, Pincus and Wasley (1996) identify post-LIFO adoption decreases in ERCs. Neither of these studies attempt to control for taxes and other factors that have been demonstrated to affect the returns and earnings relation, perhaps contributing to these conflicting findings. Biddle and Ricks (1988) and Hand (1995) investigate excess returns around earnings announcements dates of LIFO adopters. Biddle and Ricks (1988) document a positive bias in earnings forecasts and report negative two-day excess returns. In contrast, after considering the impact of pre-earnings disclosures, Hand (1995) finds returns are dependent upon where firms are listed and whether earnings forecasts are explicitly LIFO- or FIFO-based. Hand (1995) also reports positive ERCs around adopting firms' earnings announcement dates. Lee (1988) documents that in spite of the income-reducing effects of LIFO, firms using LIFO tend to have higher earnings-to-price ratios than non-LIFO firms, a result that Dhaliwal, Trezevant, and Wilkins (2000) investigate and find is attributed largely to highly correlated omitted variables, expected growth and firm leverage. In a follow-up study, Lee (1989) proposes a tax effect hypothesis to assert that in periods of rising prices tax savings under LIFO should have value enhancing consequences. He finds that during the inflationary 1970 to 1980 period, LIFO firms earn excess returns vis-à-vis FIFO firms. There is, however, no significant difference in returns during the low inflation years from 1962 to 1971. This study contributes to these prior findings by investigating the relative information content of LIFO and non-LIFO earnings using updated data and methodology including additional controls for taxes. In addition to shedding light on why the results of prior studies may conflict, the study's findings are important in light of international accounting standards convergence efforts, under which LIFO is currently prohibited. In her February 2010 press release, Chairwoman Mary Schapiro reaffirmed the Securities and Exchange Commission's (SEC) commitment to the convergence of U.S. Generally Accepted Accounting Principles (GAAP) with International Financial Reporting Standards (IFRS-SEC, 2010). Implementation of IFRS could begin as early as 2015.1 Results of this study provide evidence that the impact of LIFO earnings changes on stock prices is greater than those for non-LIFO earnings changes. In particular, after controlling for tax benefits and other factors, we document an incremental increase in the slope of the earnings-returns coefficient for LIFO firms, suggesting that LIFO earnings may be incrementally informative. This suggests shareholders benefit from firms' use of LIFO, ergo the prohibition of LIFO under IFRS may be detrimental to shareholders. This paper is organized as follows. The following section provides background and develops the study's hypotheses. The study's sample selection and methodology are described next, followed by a presentation of results, and a discussion of findings.

Although others have examined differences in ERCs of LIFO and non-LIFO firms (Carroll et al., 1991 and Pincus and Wasley, 1996) differences in excess returns around earnings announcement dates (Biddle and Ricks, 1988 and Hand, 1995), and differences in pre- and post-change to LIFO reported earnings, ours is the first study to directly examine differences in the impact of earnings changes on stock returns comparing LIFO and non-LIFO firms including additional controls for taxes. Our results provide evidence that, LIFO earnings are incrementally informative. We rationalize these findings as suggesting LIFO provides a more temporally useful match of current costs and revenues, and relative to non-LIFO users reflect at least in part and in conjunction with an intent to save taxes a more optimistic operating performance expectation by management. This finding is important in light of the movement toward convergence of GAAP and IFRS, and the proposed prohibition of LIFO under IFRS. It is also important in terms of the potential detrimental impact on shareholders of LIFO firms in terms of information quality. However, the news is not all bad. As documented in Table 4, non-LIFO firms tend to have greater abnormal returns than their LIFO counterparts. We estimate CAPM (F–F) abnormal returns would be higher by approximately 1.46 (2.15) percent if our LIFO firms were to use FIFO.9 Others have attributed the negative relation between LIFO and measures of valuation to the effects of past inflation and the market's expectations of the effects of future inflation (Guenther & Trombley, 1994), and/or to abnormal inventory levels (Bernard & Noel, 1991). As many studies of the effects of LIFO were conducted during highly-inflationary periods, which may have influenced researchers’ conclusions, further examination is warranted. The IFRS prohibition of LIFO exemplifies one of many differences in financial reporting between the U.S. and other countries (Sepheri & Houmes, 2011). In another example, Black and White (2003) document that book value of equity is more value relevant in Germany and Japan than in the U.S. and U.S. positive earnings are more relevant than book value. They contend that conservative, credit oriented institutional structures that rely on bank financing in countries abroad induce the need for more value relevant balance sheets. Consistent with these results and our findings we conjecture that since financing is more equity driven in the U.S., the income statement is more temporally relevant. The attention analysts give to U.S. earnings forecasts and trends supports this contention. Indeed, much of the extant capital markets research reflects this notion. What impact the looming internationalization of accounting standards will have on this income statement emphasis remains to be seen. Most countries now either require or permit IFRS reporting (Dickins & Cooper, 2010). Additional insight might be gained by examining whether the favorable impact of LIFO on earnings hold when examining non-U.S. firms in jurisdictions permitting both LIFO and IFRS, or comparing across jurisdictions in countries where IFRS has been implemented and LIFO is prohibited