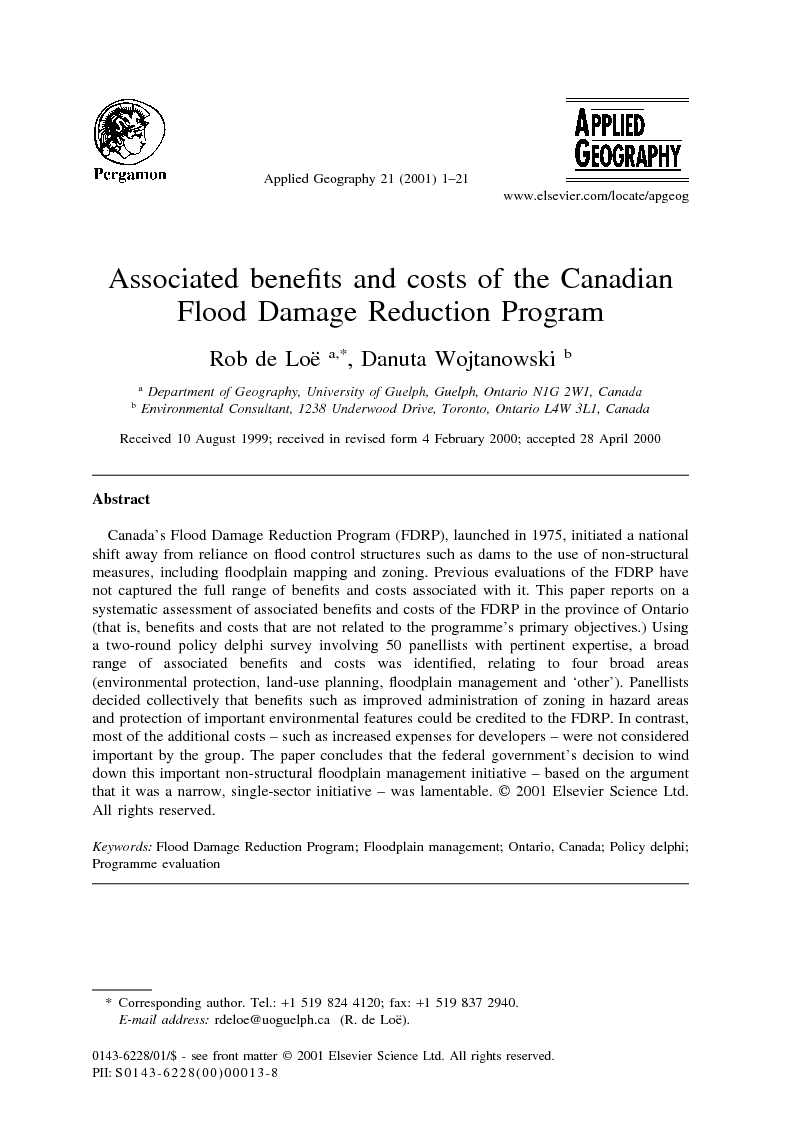 Canada's Flood Damage Reduction Program (FDRP), launched in 1975, initiated a national shift away from reliance on flood control structures such as dams to the use of non-structural measures, including floodplain mapping and zoning. Previous evaluations of the FDRP have not captured the full range of benefits and costs associated with it. This paper reports on a systematic assessment of associated benefits and costs of the FDRP in the province of Ontario (that is, benefits and costs that are not related to the programme's primary objectives.) Using a two-round policy delphi survey involving 50 panellists with pertinent expertise, a broad range of associated benefits and costs was identified, relating to four broad areas (environmental protection, land-use planning, floodplain management and ‘other’). Panellists decided collectively that benefits such as improved administration of zoning in hazard areas and protection of important environmental features could be credited to the FDRP. In contrast, most of the additional costs – such as increased expenses for developers – were not considered important by the group. The paper concludes that the federal government's decision to wind down this important non-structural floodplain management initiative – based on the argument that it was a narrow, single-sector initiative – was lamentable.

Until the early 1970s, floodplain management in Canada was dominated by a structural approach that used engineering works such as dams, dikes and diversions to regulate hydrologic systems (Environment Canada, 1993a). These demanded substantial government investment. For instance, between the 1950s and the 1970s, and to a lesser extent during the 1980s, the Canadian federal government allocated millions of dollars for joint federal–provincial projects to build flood control works (Pentland, 1990 and Environment Canada, 1993a). Although providing some benefits, the overall cost-effectiveness of this structural approach was questionable, since payments for flood damage assistance continued to escalate (Bruce, 1976). To make matters worse, some structures increased flood damage potential, since they were perceived as providing greater security and, consequently, encouraged development along flood-prone waterways (Freshwater & Arthur, 1985). Extensive flooding during 1974 clearly demonstrated that a new approach to reducing flood damage in Canada was needed. This led to the initiation of the federal–provincial Flood Damage Reduction Program (FDRP) in 1975 (Bruce, 1976). This represented a significant change in the national approach to floodplain management in Canada – from an ad hoc response using physical structures to a more proactive, nationwide ‘non-structural’ approach. Non-structural floodplain management approaches use a variety of measures, including floodplain mapping and zoning, to ensure that new development does not take place in the floodplain, and flood-proofing (e.g. elevating structures, sealing openings), to reduce the vulnerability of existing structures ( Alexander, 1993 and Environment Canada, 1993a). While some Canadian provinces, notably Alberta, British Columbia and Ontario, were already exploring non-structural floodplain management measures prior to 1975, the FDRP laid the foundation for a consistent, national approach (Watt, 1995). The programme is described in detail elsewhere ( Environment Canada, 1993a, Environment Canada, 1993b, Watt, 1995 and de Loë, 2000). Hence, the following paragraph offers only a brief overview.

Through the process of evaluating second-round statements, it was possible to identify those associated benefits and costs that the group concurred were important and unimportant, along with those over which there was disagreement. Key findings relating to the four broad areas include the following. • In the context of land-use planning, panellists agreed on the importance of four associated benefits. These pertained to improvements in planning and decision-making at the local level. Support for these was strong. In contrast, a broad range of costs to municipalities and developers was identified, but support for these was weak. Only in two cases was there some consensus (medium). The group agreed on the unimportance of costs to municipalities for incorporating floodplain restrictions, and agreed on the importance of costs to developers associated with floodplain restrictions. However, even in the latter case, the costs were seen as real but appropriate; the alternative (costs associated with flood damage) was seen as being much more serious. • In the area of environmental protection, a broad spectrum of associated benefits was identified relating to protection of wetlands, natural areas, wildlife habitat and environmentally sensitive areas; promotion of an ecosystem approach; protection and improvement of water quality; and creation of recreational opportunities. In every case, a strong consensus formed within the group on the importance of the suggested benefits. None of the costs evaluated by the group in this category were seen as important. • Panellists identified various benefits and costs of the FDRP relating to floodplain management, which they believed were over and above those relating to the programme's primary objectives. Only one of these, increased public awareness of flood risk and public acceptance of floodplain regulation, was accepted as important by the group. Most of the costs were not seen as important. However, some credence was given to the suggestion that developers, municipalities and landowners had experienced increased costs relating to floodplain regulation. Nevertheless, many panellists also suggested that these costs were appropriate, in light of the alternative costs associated with flood damage.