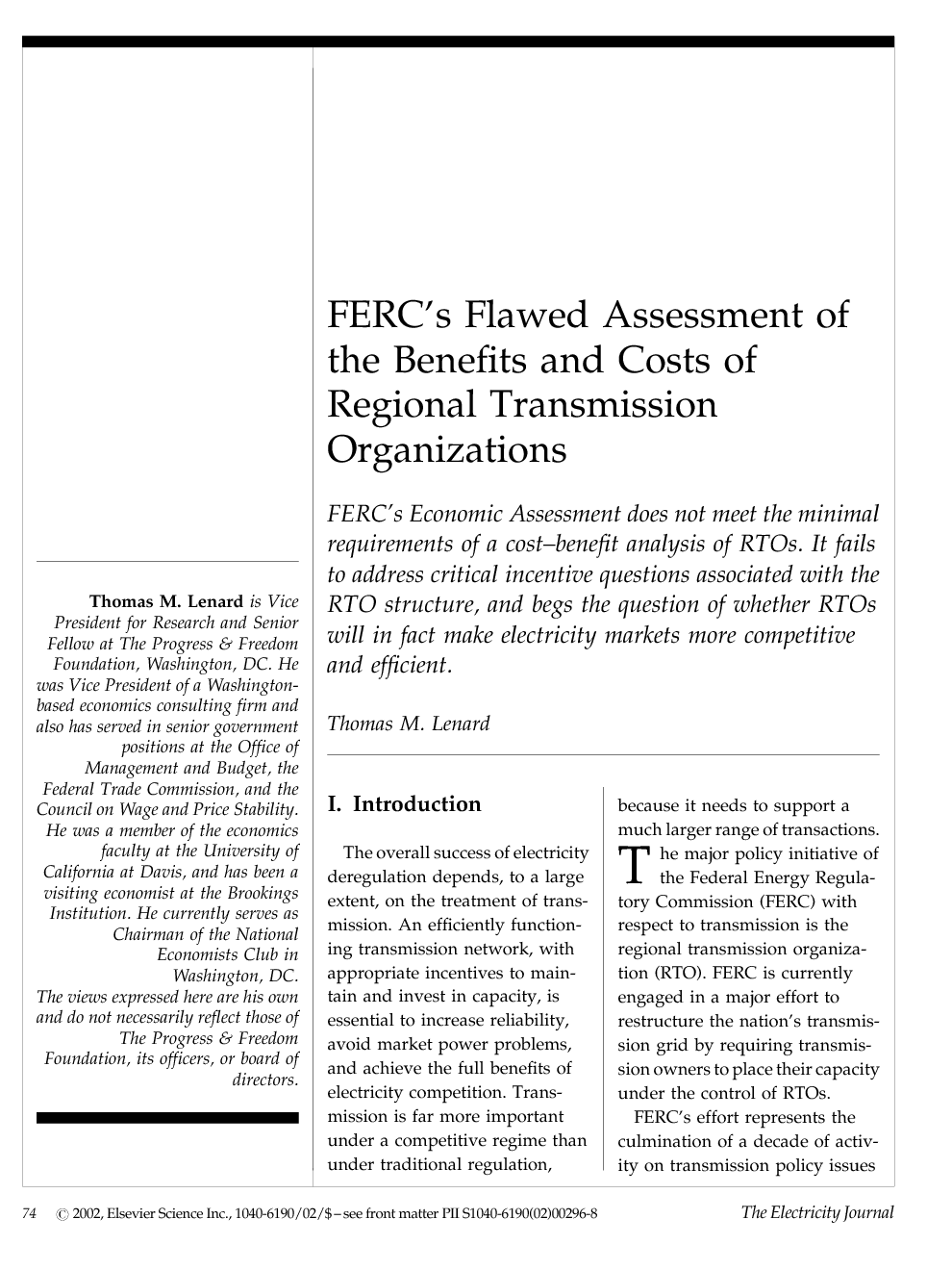 FERC’s Economic Assessment does not meet the minimal requirements of a cost–benefit analysis of RTOs. It fails to address critical incentive questions associated with the RTO structure, and begs the question of whether RTOs will in fact make electricity markets more competitive and efficient.

The overall success of electricity deregulation depends, to a large extent, on the treatment of transmission. An efficiently functioning transmission network, with appropriate incentives to maintain and invest in capacity, is essential to increase reliability, avoid market power problems, and achieve the full benefits of electricity competition. Transmission is far more important under a competitive regime than under traditional regulation, because it needs to support a much larger range of transactions. The major policy initiative of the Federal Energy Regulatory Commission (FERC) with respect to transmission is the regional transmission organization (RTO). FERC is currently engaged in a major effort to restructure the nation’s transmission grid by requiring transmission owners to place their capacity under the control of RTOs. FERC’s effort represents the culmination of a decade of activity on transmission policy issues that started with enactment of the Energy Policy Act of 1992.1 During the 1990s, at the same time that FERC was adopting open-access policies under Orders No. 888 and 889, it was also promoting the concept of the independent system operator (ISO), the precursor to the RTO. Under this arrangement, which was adopted in the Northeast and in California, transmission owners transferred operational control of their networks to non-owner ISOs. FERC formalized its commitment to the RTO concept, broadly defined, in Order No. 2000, which envisions that transmission owners will join RTOs, but that they will do so “voluntarily.” As written, the Order permits significant flexibility in how RTOs are structured. It is flexible enough to allow both ISOs (in which operational control of the grid is separated from its ownership), transcos (where owners retain operational control), or some hybrid. Order No. 2000 also permits substantial discretion in drawing the RTOs geographic boundaries.

FERC’s Economic Assessment does not meet the minimal requirements of a cost–benefit analysis of RTOs. It does not address critical incentive questions associated with the RTO structure, which entails separating ownership from control of economic assets. It begs the question of whether RTOs will in fact make electricity markets more competitive and efficient and simply assumes that they will. The FERC analysis is therefore not sufficient to support the policy path the agency seems to have chosen. 1 For a review, see Thomas M. Lenard, RTOs, Market Power and the New Regulatory Agenda at the FERC, Progress & Freedom Foundation, Feb. 2002. 2 See Thomas M. Lenard, Getting the Transcos Right, Elec. J., Nov. 1998. 3 For a recent assessment of cost–benefit analysis, see Cass R. Sunstein, The Cost–benefit State: The Future of Regulatory Protection, Section of Administrative Law and Regulatory Practice, American Bar Association, 2002. 4 Economic Assessment of RTO Policy, prepared for FERC by ICF Consulting, Feb. 26, 2002. 5 Economic Assessment, id., at 28. 6 Economic Assessment, id., at 29. 7 Economic Assessment, id., at 29. 8 Economic Assessment, id., at 31. The other RTO Scenarios are the “Transmission Only” Scenario, in which the benefits are substantially less than for the RTO Policy Scenario because efficiency improvements in generation are not assumed, and the “Demand Response” Scenario, which has greater benefits because it assumes reduction in peak demand. In addition, two sensitivity analyses—assuming two and nine rather than four RTOs—are presented.