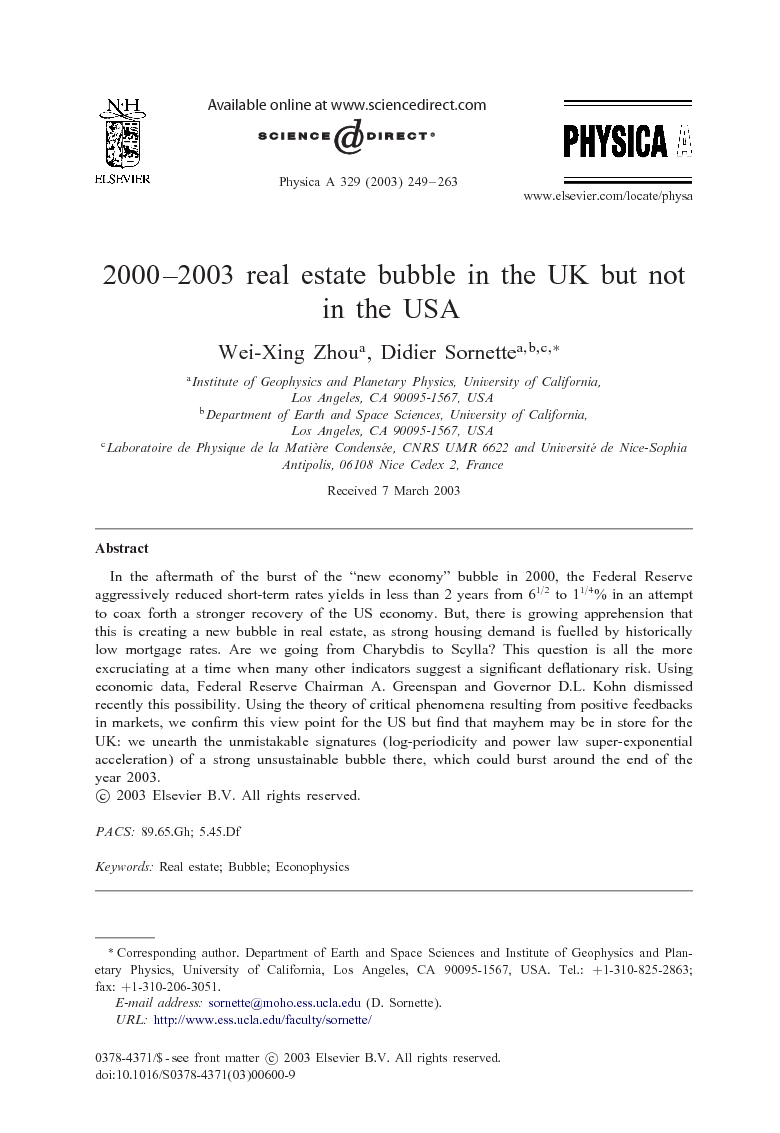 In the aftermath of the burst of the “new economy” bubble in 2000, the Federal Reserve aggressively reduced short-term rates yields in less than 2 years from 61/2 to 11/4% in an attempt to coax forth a stronger recovery of the US economy. But, there is growing apprehension that this is creating a new bubble in real estate, as strong housing demand is fuelled by historically low mortgage rates. Are we going from Charybdis to Scylla? This question is all the more excruciating at a time when many other indicators suggest a significant deflationary risk. Using economic data, Federal Reserve Chairman A. Greenspan and Governor D.L. Kohn dismissed recently this possibility. Using the theory of critical phenomena resulting from positive feedbacks in markets, we confirm this view point for the US but find that mayhem may be in store for the UK: we unearth the unmistakable signatures (log-periodicity and power law super-exponential acceleration) of a strong unsustainable bubble there, which could burst around the end of the year 2003.

Testifying before the Senate Committee on Banking, Housing and Urban Affairs in July 2002, Federal Reserve Board Chairman Alan Greenspan told lawmakers that rising home prices in the USA are a by-product of “low mortgage rates, immigration, and shortages of buildable land in some areas.” As a result, homeowners have more equity they can use to pay off high-cost consumer debt and for other purposes. This leads to a beneficial effect on the US economy rather than suggesting the possibility of a real estate crash. Based on the science of complexity, our analysis provides a confirmation of this conclusion derived from more standard economic analysis. The situation is the opposite for the UK market. Our same analysis applied to the UK real estate market shows two unambiguous signatures of an unsustainable bubble, which started years even before the end of the stock market bubble in 2000. These signatures have been found to be reliable predictors of past crashes in financial markets. The analysis points to the end of the bubble around the end of the year 2003, with either a crash or a change of direction in the UK housing market. While there are very strong correlations between stock markets in developed countries at present [11], no such correlation has yet materialized in real estate markets. Investors should however remain watchful for indications of a possible contagions to the US in the longer term. To summarize, what we have learned in this paper is that (i) the USA real estate market is in a state compatible with “rational expectation” regime; (ii) the UK real-estate market exhibits an ultimately unsustainable speculative bubble; (iii) The UK house prices will continue going up during the year 2003; and (iv) The Weierstrass-type function (3) outperforms the simple log-periodic power law formula.