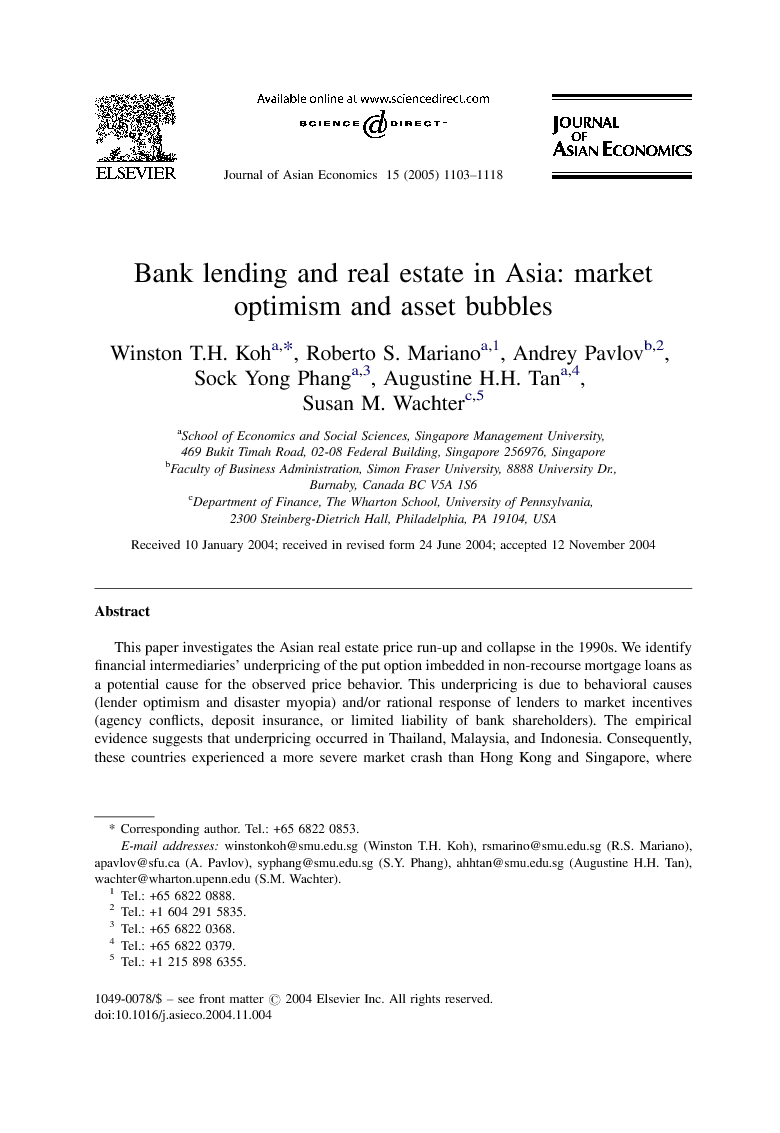 This paper investigates the Asian real estate price run-up and collapse in the 1990s. We identify financial intermediaries’ underpricing of the put option imbedded in non-recourse mortgage loans as a potential cause for the observed price behavior. This underpricing is due to behavioral causes (lender optimism and disaster myopia) and/or rational response of lenders to market incentives (agency conflicts, deposit insurance, or limited liability of bank shareholders). The empirical evidence suggests that underpricing occurred in Thailand, Malaysia, and Indonesia. Consequently, these countries experienced a more severe market crash than Hong Kong and Singapore, where underpricing was kept under control by strong government intervention and/or more appropriate incentive mechanisms.

Excessive bank lending to the real estate sector has been noted as an explanation of the Asian financial crisis. For instance, while Sachs and Woo (2000) point to macroeconomic problems as the basis for the crisis, they also note that “too much money was poured into speculative real estate projects, e.g., in downtown Bangkok.” More directly, Krugman (1998), states that “(t)he problem began with financial intermediaries—institutions whose liabilities were perceived as having an implicit government guarantee, but were essentially unregulated and therefore subject to severe moral hazard problems. The excessive risky lending of these institutions created inflation—not of goods but of asset prices.” Krugman goes on to identify the need for a more complex analysis of the Asian financial crisis based on an option value approach. In a recent theoretical paper Pavlov and Wachter (2004), hereafter PW, formalize an options-based model of financial intermediaries. As PW show, non-recourse asset-backed loans imbed a put option which gives the borrower the right to default. If the value of the underlying asset falls below the outstanding balance of the loan, the borrower may simply “put” the asset to the lender, and walk away from any future payments of the principal or interest on the loan. The lender is compensated for providing this option through a higher interest rate on the loan. PW demonstrate that, if lenders underprice this put option, asset markets incorporate this mistake in higher asset prices. They further identify the conditions that induce lenders to rationally underprice the put option. In this paper, we apply the PW model to the Asian financial crisis. In particular, we examine the underpricing hypothesis for its impact on asset prices, using data for five Asian countries. This underpricing is initiated by short-term bank managers who rationally underestimate the default risk of their loans in order to capture larger market share. Under certain conditions, competition then forces all remaining managers to underprice the put option as well. PW show such these effects can lead to an underpricing equilibrium in the lending market, as well as inflated prices in the asset market. Importantly, these results hold even when market participants are fully rational. Of the five Asian countries we examine, we empirically find evidence consistent with the PW underpricing phenomena in Thailand, Malaysia, and Indonesia. Hong Kong and Singapore, on the other hand, do not seem to exhibit the symptoms of underpricing. Interestingly, the first three countries experienced real estate price declines of 95, 86, and 81 percentage points, respectively, while Singapore and Hong Kong saw relatively more tempered declines of 33 and 38 percentage points. These findings are consistent with the widely accepted notion that there was a shift in demand for real estate assets caused by macroeconomic negative demand shock but this shift was substantially magnified by the excessive bank lending in certain countries. A large body of literature has examined the role of the banking sector in propagating business cycles; see, for example Bernanke (1983), Bernanke and Gertler (1995), Kiyotaki and Moore (1997), and Allen and Gale (1997). These studies demonstrated that the workings of the financial sector can amplify the magnitude of the business cycle as bank credit exposure moves procyclically. In the aftermath of the Asian financial crisis, many researchers, including Krugman (1998), Wade (1998), Mera and Renaud (2000), Tan (2000) and Quigley (2001), have examined the role played by the real estate sector in the crisis, and have argued for reforms in the regulation of the real estate markets and the treatment of real estate loans by financial institutions in order to prevent the recurrence of the kind of asset bubbles that contributed to the financial crisis. Commentators have noted that real estate markets are vulnerable to waves of optimism and herd behavior that result in bubbles;6 and that speculation in real-estate markets was rampant in many Southeast Asian economies in the early 1990s (Quigley, 2001). In Thailand, for instance, short-term capital inflows found its way into Thailand's real estate market, as banks competed to lend to real estate developers and investors, based on expectations of continued strong economic growth (Tan, 2000). Herring and Wachter (1999) find that a common striking feature of many financial crises around the world is that the most seriously affected economies often first experienced a collapse in real estate prices and a consequent weakening of banking systems before going on to experience an exchange rate crisis, a banking sector crisis, and a business cycle bust. We add to this literature by identifying the conditions that would accompany a bank-driven financial crisis and examine whether this analysis applies to the Asian financial crisis. The paper is organized as follows. In Section 2, we briefly review key developments in Asian real estate markets in the early 1990s, focusing on the surge in foreign capital and the expansion of bank credit to the real estate sector. In Section 3, we discuss the relationship between lender optimism and underpricing of the put option in non-recourse loans, as described in PW. We also discuss the role that market optimism plays in the real estate markets across Asian economies. Section 4 applies the analysis of PW to investigate bank loan underpricing as a factor in real estate markets in Hong Kong, Indonesia, Malaysia, Singapore and Thailand and the Asian financial crisis. Section 5 concludes the paper.

The Pavlov and Wachter (2004) model shows that the incentives to underprice the put option of non-recourse loans results in inflated asset prices above their fundamental level. Our analysis shows that Thailand, Malaysia, and Indonesia appeared to have experienced the Pavlov–Wachter underpricing phenomena, which, in turn, resulted in massive price declines following the negative demand shock of 1997. Singapore and Hong Kong, on the other hand, seem to have successfully controlled underpricing in the early 1990s, due to strong and decisive government intervention. Consistent with this model, Singapore and Hong Kong experienced relatively smaller price declines. Relative to their peaks, the real estate markets in Thailand, Malaysia, and Indonesia declined by shocking 95, 86, and 81 percentage points, respectively, while Singapore and Hong Kong saw relatively more moderate declines of 33 and 38 percentage points. The analysis of the underpricing equilibrium in the paper supports the view that the presence of incentives to underprice real estate loans was prevalent during the Asian real estate bubble, and is a factor in fuelling the asset bubble in the run-up to the Asian financial crisis. These results complement the findings of other research on the factors that fuelled the asset bubbles in the run-up to the Asian financial crisis. Data limitations prevent us from conducting a more detailed analysis at present, and further research is needed to refine the results. With more comprehensive real estate data, we could also control for other variables to refine the analysis. For instance, we could control for the difference in the exchange rate regimes as well as the control over domestic interest rate by the central banks. As we noted earlier, since foreign capital inflow was a significant driver of the stock market boom and real estate market boom, deposit rates may not need to rise, even as banks continue to increase their lending to the real estate sector. Finally, we note that the system of pegged exchange rates present in many Asian countries in the early 1990s also meant that besides loan default risk, exchange rate risk (specifically, devaluation risk) could be another significant factor in the underpricing of the embedded put options in the loans market. Incorporating these aspects into an expanded theoretical model described in Pavlov and Wachter (2004) will enrich the analysis and could yield additional predictions that we can test empirically.