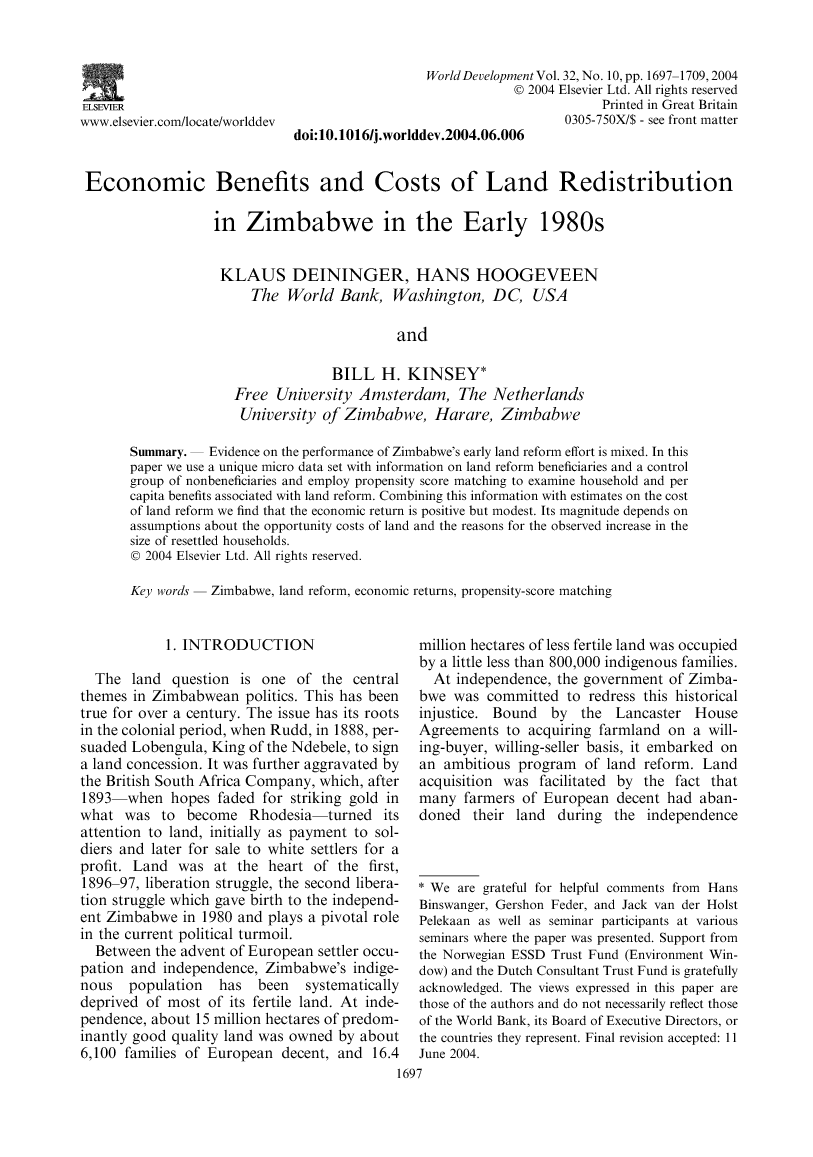 Evidence on the performance of Zimbabwe’s early land reform effort is mixed. In this paper we use a unique micro data set with information on land reform beneficiaries and a control group of nonbeneficiaries and employ propensity score matching to examine household and per capita benefits associated with land reform. Combining this information with estimates on the cost of land reform we find that the economic return is positive but modest. Its magnitude depends on assumptions about the opportunity costs of land and the reasons for the observed increase in the size of resettled households.

The land question is one of the central themes in Zimbabwean politics. This has been true for over a century. The issue has its roots in the colonial period, when Rudd, in 1888, persuaded Lobengula, King of the Ndebele, to sign a land concession. It was further aggravated by the British South Africa Company, which, after 1893—when hopes faded for striking gold in what was to become Rhodesia—turned its attention to land, initially as payment to soldiers and later for sale to white settlers for a profit. Land was at the heart of the first, 1896–97, liberation struggle, the second liberation struggle which gave birth to the independent Zimbabwe in 1980 and plays a pivotal role in the current political turmoil. Between the advent of European settler occupation and independence, Zimbabwe’s indigenous population has been systematically deprived of most of its fertile land. At independence, about 15 million hectares of predominantly good quality land was owned by about 6,100 families of European decent, and 16.4 million hectares of less fertile land was occupied by a little less than 800,000 indigenous families. At independence, the government of Zimbabwe was committed to redress this historical injustice. Bound by the Lancaster House Agreements to acquiring farmland on a willing-buyer, willing-seller basis, it embarked on an ambitious program of land reform. Land acquisition was facilitated by the fact that many farmers of European decent had abandoned their land during the independence war. A three-year drought during 1982–84 and the resulting loan defaults made additional land available for the program. As a result, over 1982–84, some 25,000 households could be resettled. After 1984, the pace of land acquisition and resettlement slowed markedly. By the end of 1989, 3.5 million hectares of land had been acquired and 71,000 households had been resettled—more than the original target of 18,000 but far from the subsequently revised target of 162,000 households.

In this paper, an overview of the benefits and costs of Zimbabwe’s land reform program has been presented. Using propensity-score matching to deal with differences in initial conditions between land reform households and a control group of households that were eligible for the land reform program, applied for it but were rejected, we find that the return is modest, US$17 per capita per annum. This outcome has to be interpreted with care because the number of observations in the matching process is small and because various other benefits to land reform—such as reduced pressure on land in communal areas or rectification of an historical injustice—are not valued. Moreover, if the observed increase in household size among settlers is attributed to nonproductive individuals seeking to share in the high income attained by resettled households, then the benefits to resettlement are underestimated because the opportunity costs of these unproductive household members would be zero. A further complicating factor in determining the rate of return to resettlement is uncertainty about the correct opportunity cost of land. In this paper, we use the price of land as the indicator, but given the many distortions in the Zimbabwean land market the undistorted market price is most likely to be different from the price paid by the government. If despite this caveat, we take the price of land to reflect its opportunity cost, then regardless of the modest benefit of US$17 but due to the low cost of land in the early 1980s, the return on investment in land reform is acceptable (about 8% per annum). If more recent market prices for land were used, however, the rate a return would be lower and less acceptable (about 5%). If the increase in household size is a reflection of the lack of opportunities elsewhere in the economy, and if the additional household members are largely unproductive so that their presence taxes the returns generated by the original settlers, then the per capita benefits of land reform may have been underestimated by as much as a factor of four.