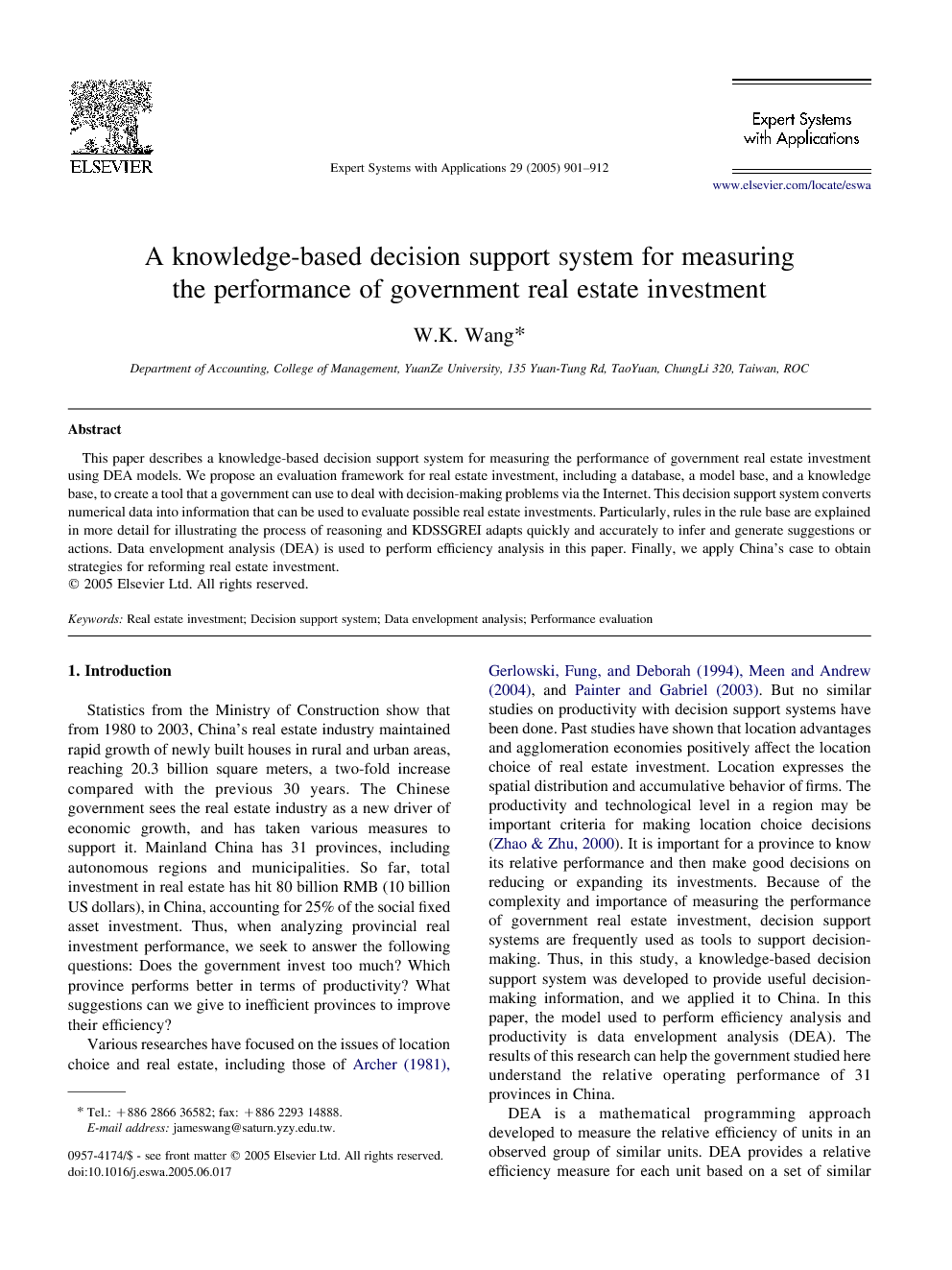 This paper describes a knowledge-based decision support system for measuring the performance of government real estate investment using DEA models. We propose an evaluation framework for real estate investment, including a database, a model base, and a knowledge base, to create a tool that a government can use to deal with decision-making problems via the Internet. This decision support system converts numerical data into information that can be used to evaluate possible real estate investments. Particularly, rules in the rule base are explained in more detail for illustrating the process of reasoning and KDSSGREI adapts quickly and accurately to infer and generate suggestions or actions. Data envelopment analysis (DEA) is used to perform efficiency analysis in this paper. Finally, we apply China's case to obtain strategies for reforming real estate investment.

Statistics from the Ministry of Construction show that from 1980 to 2003, China's real estate industry maintained rapid growth of newly built houses in rural and urban areas, reaching 20.3 billion square meters, a two-fold increase compared with the previous 30 years. The Chinese government sees the real estate industry as a new driver of economic growth, and has taken various measures to support it. Mainland China has 31 provinces, including autonomous regions and municipalities. So far, total investment in real estate has hit 80 billion RMB (10 billion US dollars), in China, accounting for 25% of the social fixed asset investment. Thus, when analyzing provincial real investment performance, we seek to answer the following questions: Does the government invest too much? Which province performs better in terms of productivity? What suggestions can we give to inefficient provinces to improve their efficiency? Various researches have focused on the issues of location choice and real estate, including those of Archer, 1981, Gerlowski et al., 1994 and Meen and Andrew, 2004, and Painter and Gabriel (2003). But no similar studies on productivity with decision support systems have been done. Past studies have shown that location advantages and agglomeration economies positively affect the location choice of real estate investment. Location expresses the spatial distribution and accumulative behavior of firms. The productivity and technological level in a region may be important criteria for making location choice decisions (Zhao & Zhu, 2000). It is important for a province to know its relative performance and then make good decisions on reducing or expanding its investments. Because of the complexity and importance of measuring the performance of government real estate investment, decision support systems are frequently used as tools to support decision-making. Thus, in this study, a knowledge-based decision support system was developed to provide useful decision-making information, and we applied it to China. In this paper, the model used to perform efficiency analysis and productivity is data envelopment analysis (DEA). The results of this research can help the government studied here understand the relative operating performance of 31 provinces in China. DEA is a mathematical programming approach developed to measure the relative efficiency of units in an observed group of similar units. DEA provides a relative efficiency measure for each unit based on a set of similar units, or on the best performers operating on the frontier. Since DEA was developed by Charnes, Cooper, and Rhodes (1978), it has been widely applied to such industries as finance (Miller and Noulas, 1996 and Mukherjee et al., 2001), universities or educational programs (Banker et al., 2004 and Caballero et al., 2004), medical care (Fickler & Wirtschafter, 1993), information technology (Lee & Barua, 1999), airlines (Tone, 1993), and the tourism industry (Barros & Alves, 2004), etc. The decision support system can be used as a strategic planning tool to evaluate efficiency and performance-based decision-making information. The objective of the decision support system is to help decision makers make good decisions when dealing with complex situations and information. Al-Najjar and Alsyouf (2003) developed an efficient maintenance approach using multiple criteria decision-making. Their method leads to less planned replacement and reduces failures to approximately zero. Park and Han (2002) adopted case-based reasoning (CBR) and an analytic hierarchy process (AHP) to enhance a decision support system. Pal and Palmer (2000) developed a hybrid decision support system for the business acquisition process. Wen et al., 2005 and Wen et al., 2005 presented a new framework for knowledge-based intelligent decision support systems for national defense budget planning. Kuo and Xue (1998) presented a decision support system for sales forecasting through a fuzzy neural network. Shin and Lee (2002) used a genetic algorithm to predict whether a company would or would not go bankrupt. They found that using the genetic algorithm is better than using ANN. Wen et al., 2005 and Wen et al., 2005 also used a hybrid knowledge-based decision support system to support enterprise mergers and acquisitions. Their hybrid system integrates a database, case base, rule base, and model base into a tool managers oar use to deal with decision-making problems via the Internet. The rest of the paper is organized as follows. Section 2 presents a brief review of the DEA theorem. In Section 3, the architecture of knowledge-based decision support system for measuring the performance of government real estate investment is addressed and explained. Section 4 presents the system implementation and results of empirical analysis, including system implementation, efficiency analysis, reference set analysis, return to scale analysis, and inefficiency analysis. Finally, some important conclusions and future works are given in Section 5.

This paper has reported the design and implementation of a knowledge-based decision support system for measuring the performance of government real estate investment using DEA models. The intelligent system consists of a database, rule base, and model base. By using the system, government and managers can easily deal with decision-making problems via the Internet. Rules in the rule base have been explained in detail to illustrate the reasoning process. In this study, we used the DEA models, including CCR-I, BCC-I and FDH, in order to shed new light on operational efficiency of government real estate investment. The main findings can be summarized as follows. The CCR and SBM efficiency score analysis results show that nine provinces are relatively efficient. All the inefficient provinces can improve their performance by decreasing their inputs. Efficient reform strategies (those which reduce inputs) have been proposed for the inefficient provinces. When the inefficient provinces exhibit decreasing return-to-scale, it is likely that the reforms can improve their performance by decreasing their inputs. For the inefficient provinces, the most effective reform is to decrease the area of developed land. Through the successful development of this prototype system, it has been demonstrated that by increasing return-to-scale, provinces can increase their investment. Although the KDSSREI system has been developed, there are still several ways in which we can further improve its functions. In particular, we can extend its functions to assist a province to evaluate its performance by using different models, such as Stochastic Frontier Analysis, the Fuzzy DEA Model, and the Malmquist index, to evaluate long term productivity. Furthermore, we also can use the logistic regression method, or Probit model to investigate effect factors of inefficient provinces. Moreover, in recent years, rule-based reasoning (RBR), case-based reasoning (CBR), and model-based reasoning (MBR) have emerged as important and complementary reasoning methodologies in the intelligent systems area. For complex problem solving, it is useful to integrate RBR, CBR, and MBR for decision-making. In the future, we will integrate RBR, CBR, and MBR into the system. Thus, building a fast and efficient system will also be one of our major research goals in the future.