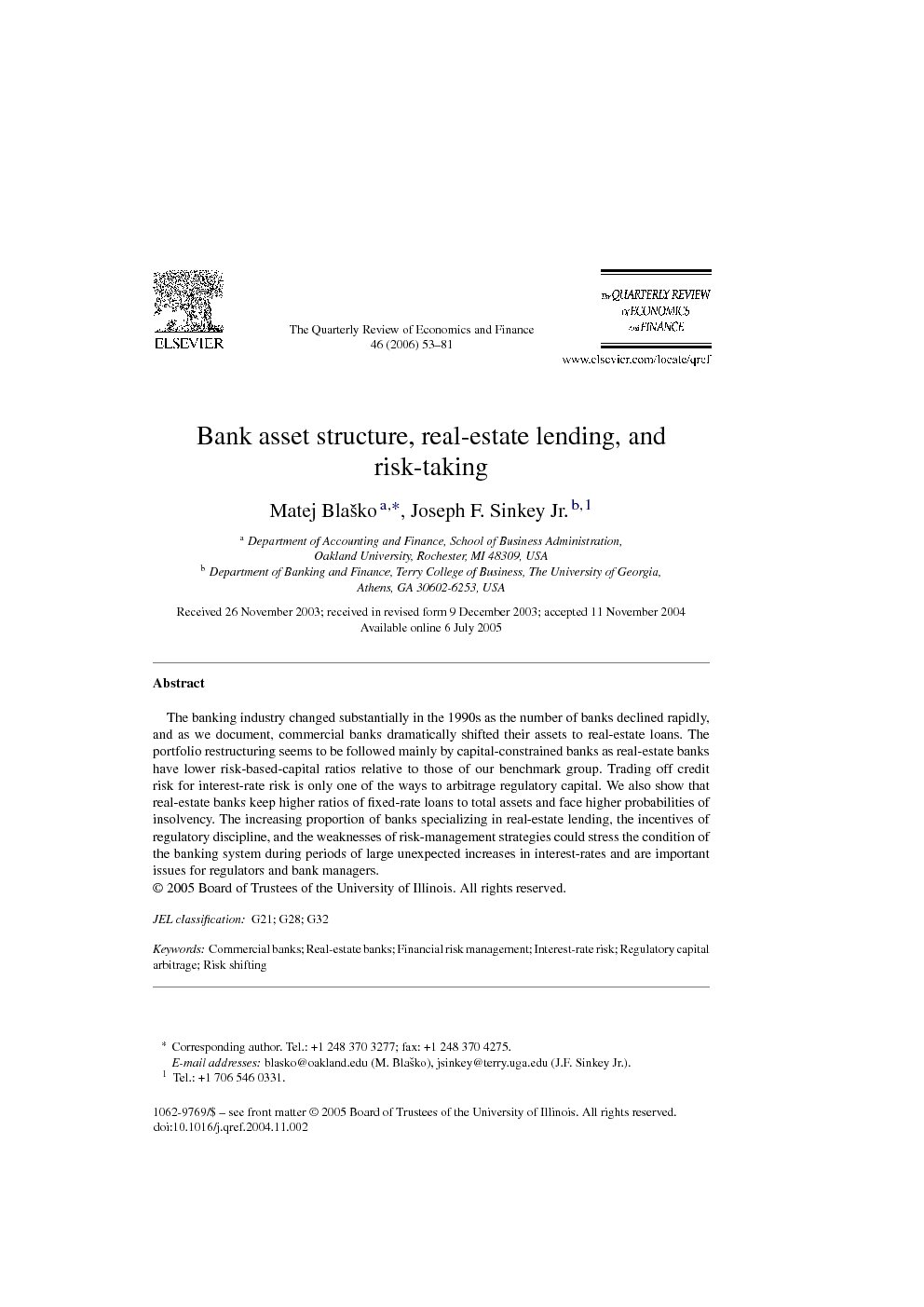 The banking industry changed substantially in the 1990s as the number of banks declined rapidly, and as we document, commercial banks dramatically shifted their assets to real-estate loans. The portfolio restructuring seems to be followed mainly by capital-constrained banks as real-estate banks have lower risk-based-capital ratios relative to those of our benchmark group. Trading off credit risk for interest-rate risk is only one of the ways to arbitrage regulatory capital. We also show that real-estate banks keep higher ratios of fixed-rate loans to total assets and face higher probabilities of insolvency. The increasing proportion of banks specializing in real-estate lending, the incentives of regulatory discipline, and the weaknesses of risk-management strategies could stress the condition of the banking system during periods of large unexpected increases in interest-rates and are important issues for regulators and bank managers.

The banking industry and housing finance have changed substantially since the savings-and-loan crisis of the 1980s. Prior to this, traditional banking markets were fragmented, containing a large number of small and specialized firms. Structural changes (e.g., technology and deregulation) slowly but surely transformed segmented banking firms into one of consolidated, multiple-product financial institutions and marked the birth of the financial-services industry. During this transition, commercial banks increasingly shifted their product and asset portfolios into consumer lending, traditionally a specialty of thrifts and credit unions. This paper investigates real-estate lending, asset structure, and risk-taking of all insured commercial banks during 1989–1996. We focus primarily on banks specializing in real-estate lending (REBs), defined as commercial banks holding more than 40% of their total assets in loans secured by real estate. All other commercial banks in the economy provide a benchmark used to compare and contrast the behavior of REBs. Given the changes in bank capital regulation as well as the greater interest-rate risk of fixed-rate mortgages, we also explore how bankers manage risk. We present evidence that commercial banks have increasingly shifted their portfolios to real-estate loans. For example, the number of REBs has increased from 1724 at year-end 1989 to 2835 at year-end 1996. This bank-level shift to real-estate lending has been paralleled by an equivalent increase in real-estate loans at the macro-industry level. This finding is especially noteworthy given the substantial consolidation in the banking industry, which experienced a drop from 12,702 banks (1989) to 9529 banks (1996).2 This shift in portfolio strategy seems to be followed mainly by banks constrained by regulatory requirements. We find that REBs have lower risk-based-capital (RBC) ratios relative to ratios of our benchmark group. This result can be explained, in part, by the existence of RBC standards that allowed banks to shift their portfolios to presumably safer assets, such as mortgages, with the benefit of lower capital requirements but without accountability for interest-rate risk. Trading off credit risk for interest-rate risk is only one of the ways to manipulate regulatory discipline.3 Based on our risk measures, we show that REBs, relative to less-specialized banks, face higher probabilities of insolvency. While the overall riskiness of the banking sector declined during our sample period, the higher riskiness of REBs is observed in most of the sample years and confirmed by a multivariate linear regression model. Given the ex-post construction of our risk measure, the higher riskiness of real-estate banks can be attributable either to their higher natural economic risk exposures (bank equity risk), or to desired risk-level targets. It is not the goal of this paper to test which explanation is correct. Banks use two main channels to manage interest-rate risk: on-balance sheet operational activities and off-balance sheet techniques. Although real-estate banks have significantly better maturity GAPs than less-specialized banks, their use of off-balance sheet activities in the form of derivatives is not different. For example, only about 5% of REBs use interest-rate derivatives, the same proportion observed for all other banks. In addition, cross-sectional differences in bank asset structures are noteworthy. Although REBs, relative to other banks, use floating-rate loans to a greater degree, they still keep higher ratios of fixed-rate loans to total assets. Also, the evidence does not support the hypothesis that banks benefit from hedging at the holding-company level. Jointly, this indicates a higher economic riskiness of REBs, and therefore higher values of the put options written by deposit insurers. Since the optimal bank risk-level depends on shareholder preferences, we cannot and do not claim that REBs should hedge more. However, observing the steady increase in REBs and their lower capital ratios, the evidence indicates that bank shareholders do prefer higher risk-levels relative to the alternative strategies or they are capital constrained and shift their portfolios in response to regulatory incentives or both. Several motivations drive our research. Scant evidence exists on the risk-taking behavior of commercial banks, especially community organizations, and the relationship between bank risk and real-estate lending in the 1990s.4 The S&L crisis of the 1980s provides an important historical precedence of how costly neglected bank risk-taking preferences can be. Also, regulatory capital standards introduced in the late 1980s may have provided banks with new incentives and may explain their risk-taking and risk-management strategies. The regulatory environment provides some clues to the observed bank behavior. Our evidence is consistent with the hypothesis of “regulatory capital arbitrage” (Jones, 2000, among others). This paper addresses the systemic risk posed by a growing subset of the U.S. banking system in the form of REBs banks for the years 1989–1996. Since smaller banks dominate the population of REBs, our research primarily applies to them. If large banks engage in risk-shifting behavior and exploit deposit-insurance subsidies (e.g., Hovakimian & Kane, 2000, among others), it is more than likely that REBs also respond strongly to regulatory incentives. Moreover, although Eisenbeis & Kwast (1991) document the viability of REBs for the years 1978 through 1988, they do not assess the hedging and risk-management practices of REBs, especially in light of S&L crisis of the late 1980s. And finally, our study extends the research on risk management at financial institutions of Esty, 1997 and Esty, 1998, Esty, Tufano, & Headley (1994), and Froot, Scharfstein, & Stein (1993), Froot & Stein (1998). The paper proceeds as follows. The next section briefly reviews the banking environment and the theories related to corporate hedging, capital regulation, and deposit insurance. The third section describes our sample and methodology. The fourth section introduces the stratification procedures for constructing our bank groups and describes the resulting data. The fifth section presents our empirical results. The last section summarizes and concludes the paper and draws some policy implications.

Structural changes in financial markets and in various segments of the financial-services industry, especially the savings-and-loan component, have presented opportunities and threats to commercial banks. Many bankers, especially those in local communities, have reacted by shifting their portfolios toward real-estate lending or housing finance. For example, the number of real-estate-lending banks has increased from 1724 at year-end 1989 to 2835 at year-end 1996. This finding is especially noteworthy given the substantial consolidation in the banking industry, which paralleled the contraction of the thrift industry. Opportunities for regulatory capital arbitrage, reform of federal deposit insurance, and recruitment by the FHLB have provided additional incentives for banks to become more heavily involved in real-estate lending. A governmental safety net, unless priced and administered properly, enhances risk-shifting opportunities for insured depositories. This paper analyzes bank asset structure, risk-taking behavior, and financial risk management of U.S. commercial banks from 1989 through 1996. Focusing on real-estate lending banks (REBs), we find that they have higher probabilities of insolvency relative to less-specialized banks, a finding that links to the extent of their real-estate lending. Given the construction of our bank risk index, the higher riskiness of REBs may be due either to their natural underlying risk exposures or to their higher risk-level (risk-preference) targets. We also show that REBs are better than the other banks in managing their interest-rate risk using on-balance sheet techniques but there are no differences in the use of the off-balance sheet tools. Collectively, our findings suggest that banks react strongly to regulatory incentives, which may have unintended evils by raising rather than lowering the economic riskiness of individual banks. Our analysis is consistent with notions that weaknesses in capital regulation and deposit-insurance pricing encourage banks to engage in regulatory capital arbitrage and potentially exploit deposit-insurance subsidies. The increasing number of banks specializing in real-estate lending, the distorted incentives of regulatory discipline, and weaknesses in risk-reduction strategies could, in a sharp interest-rate upswing, stress the condition of the banking system and the FDIC. We close with some suggestions for future research and some policy concerns. First, issues dealing with historical, long-term bank insolvencies and how they relate to the bank level of interest-rate risk-taking present opportunities for future research.34 The S&L crisis of the 1980s provides an important lesson that neglected interest-rate risk-taking may lead to economy-wide crises. Work by Kane (1989) and others document that the demise of the thrift industry was attributed to excessive interest-rate risk and the mispricing of deposit insurance. The number of commercial bank failures was relatively low and decreasing during our sample period. For example, 127 banks failed in 1991, 41 in 1993, six in 1995 and the failures stayed in single digits for the rest of the decade. Second, as REBs comprise only a relatively small part of banking sector assets, we do not claim that we present evidence of a serious danger of rising systemic risk, defined as the risk that an event will trigger a loss of economic value or confidence in a substantial portion of the financial system that is serious enough to have significant adverse effects on the real economy.35 However, these tendencies deserve attention as smaller banks account for a disproportionate share of bank loans to small businesses and their failures account for a disproportionate share of losses to the deposit insurance fund (Gilbert & Sierra, 2003). Third, risk-based capital requirements encourage banks to engage in regulatory capital arbitrage, which Jones (2000, p. 36), among others, describes as opportunities for banks to reduce substantially their regulatory measures of risk with little or no corresponding reduction in their overall economic risk. By substituting residential mortgages for assets with higher regulatory-capital requirements, REBs reduce their risk-weighted assets and lower their capital requirements. In doing so, however, their interest-rate exposure increases. Based on our findings, this substitution of reduced credit risk for increased interest-rate risk has resulted in an increase in the overall riskiness of REBs compared to non-REBs. Our results confirm Giddy's (1985) view that the imposition of regulatory capital requirements for credit risk would drive banks to substitute noncredit risks such as interest-rate and operating risks for credit risk. If regulatory discipline (e.g., in the form of risk-based capital requirements) was more effective, then banks that substitute interest-rate risk for credit risk should not be able to engage in regulatory capital arbitrage. Consistent with Hovakimian & Kane's (2000) findings for large BHCs, our results suggest risk-shifting behavior at the bank level as REBs hold substantially less capital (based on various measures) than non-REBs. The policy implication seems clear: banks and regulators neglect the interest-rate risk at their own peril. On balance, regulatory capital arbitrage and the distorted incentives of regulatory discipline offer plausible explanations for the increase in the number of banks pursuing real-estate lending strategies and their risk-taking. However, other explanations also are plausible and provide avenues for future research. Tufano (1996) finds that risk-management practices are negatively associated with the tenure of firms’ CFOs. Also, corporate-control issues, limited access to hedging instruments, and an entrenchment hypothesis grounded in lack of managerial interests, skills, or preferences might explain why REBs have not adopted financial-engineering techniques extensively.