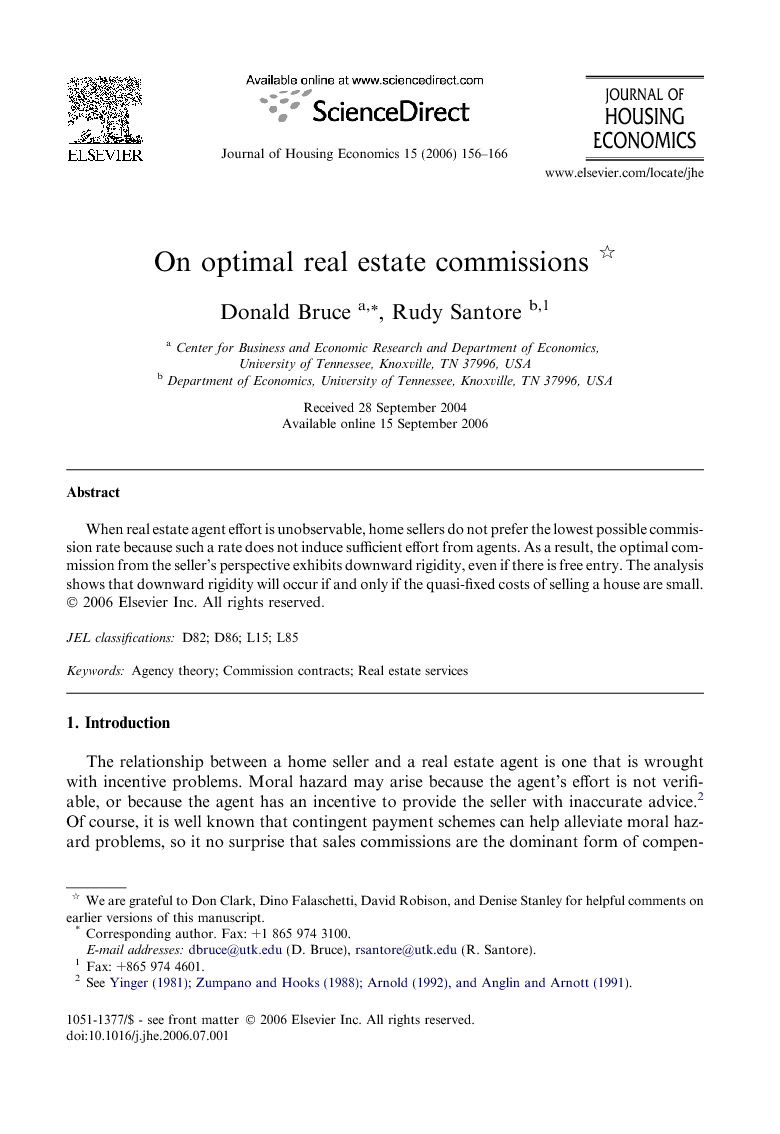 When real estate agent effort is unobservable, home sellers do not prefer the lowest possible commission rate because such a rate does not induce sufficient effort from agents. As a result, the optimal commission from the seller’s perspective exhibits downward rigidity, even if there is free entry. The analysis shows that downward rigidity will occur if and only if the quasi-fixed costs of selling a house are small.

The relationship between a home seller and a real estate agent is one that is wrought with incentive problems. Moral hazard may arise because the agent’s effort is not verifiable, or because the agent has an incentive to provide the seller with inaccurate advice.2 Of course, it is well known that contingent payment schemes can help alleviate moral hazard problems, so it no surprise that sales commissions are the dominant form of compensations for real estate agents. This paper analyzes the optimal sales commission from the perspective of the home seller when agent effort cannot be verified, and derives the conditions under which the agent can earn informational rents despite an otherwise competitive market in real estate services. Buyers in most markets prefer lower prices, but this is not true in markets with asymmetric information. When it is not possible to contract on effort (because it cannot be verified), a home seller faces a tradeoff: a smaller commission allows the seller to keep a larger share of the sale price. However, the agent provides less effort at a lower commission increasing the expected time the house is on the market. The optimal commission rate must balance these two considerations. As a result, a home seller may prefer a higher rate to a lower one because low rates fail to induce sufficient agent effort.3 An important implication of our analysis is that real estate agents can earn informational rents on house sales even if they behave non-cooperatively as long as the quasi-fixed costs of selling a house are small.4 In other words, the optimal commission rate will typically lie above an agent’s reservation rate. Competition does not remove the rents because the home seller is worse off at lower commission rates. It is often suggested that commissions are too high for a competitive market (see, for example, Yinger (1981) and Anglin and Arnott (1999)), but our model shows that above-normal commission rates are consistent with a high degree of competition.5,6 In practice, commission rates typically fall between 5% and 7%, with 6% being by far the most common. Though it has become something of a stylized fact that real estate sales commission rates are uniform, recent studies (for example, Sirmans and Turnbull (1997)) suggest otherwise. In fact, the most recent evidence suggests that the average real estate commission rate in the US is down to about 5.1 percent from historic averages around six percent (Hagerty (2004)). One might speculate that the advent of new technology such as the internet and a possible decline in information asymmetry are responsible for the fall in rates. Our model does not predict uniform commission rates. On the contrary, the optimal commission rate, in principle, depends on the exact characteristics of a given house and relevant market. We are aware of no other theoretical research that predicts the same commission rate for different houses and different markets. Finally, let us point out that in many circumstances the first-best contract requires that the agent purchase the house and then resell it using the optimal level of effort (Shavell, 1979). However, as discussed by Anglin and Arnott (1991), such contracts are likely to be infeasible in the real estate market and are rarely observed.7 Our paper contributes to this literature by showing that when it is not feasible for the agent to purchase the house, the optimal commission rate may lie above the agent’s reservation rate.

We have provided a simple economic rationale for the observation that real estate sales commission rates seem to exhibit remarkable rigidity. Our explanation relies on a principal–agent model in which a real estate agent’s effort is not verifiable by the home seller. The key insight is that a home seller does not necessarily prefer a lower rate to a higher one since agents exert less effort at low rates. Consequently, the optimal sales commission never falls below the rate that maximizes the seller’s net sales revenue. When selling a house involves small quasi-fixed costs, the agent’s reservation rate lies below the optimal rate. Real estate agents may therefore earn informational rents, even though the market is competitive. Nevertheless, the rents are likely to be dissipated through entry and non-price competition, implying zero economic profits in the long run. Several aspects of our discussion merit additional attention in future empirical research. Perhaps most importantly, the link between transaction-specific commission rates and effort (as proxied by time-to-sale and eventual sales prices) should be tested. A more difficult pursuit would be an exploration of the relationship between quasi-fixed costs and commission rates to determine whether agents facing higher costs (a) charge higher commission rates and/or (b) make efforts to reduce those costs in order to increase profits for a given commission rate. The ability to pursue these topics will depend, of course, upon the availability of transaction-specific data.