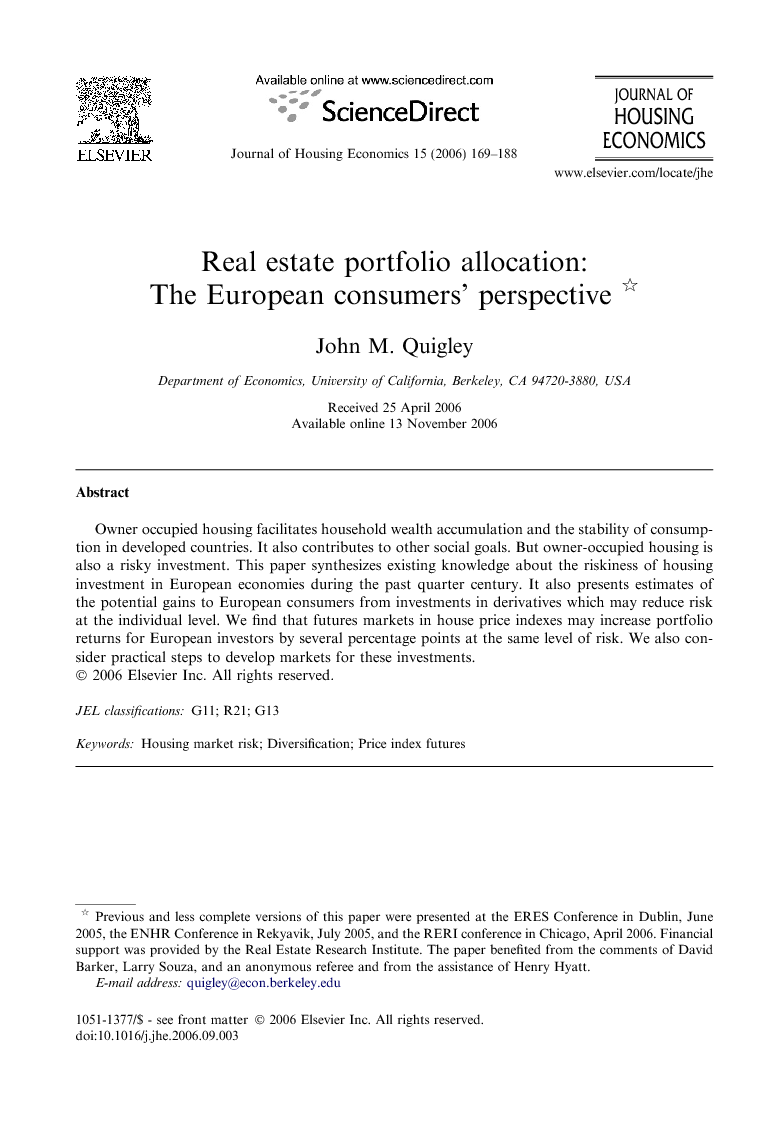 Owner occupied housing facilitates household wealth accumulation and the stability of consumption in developed countries. It also contributes to other social goals. But owner-occupied housing is also a risky investment. This paper synthesizes existing knowledge about the riskiness of housing investment in European economies during the past quarter century. It also presents estimates of the potential gains to European consumers from investments in derivatives which may reduce risk at the individual level. We find that futures markets in house price indexes may increase portfolio returns for European investors by several percentage points at the same level of risk. We also consider practical steps to develop markets for these investments.

Owner-occupied housing plays a unique role in developed countries such as the United States and Western Europe. This role encompasses the mobilization of individual savings and the stimulation of consumption, as well as the contribution of housing to a variety of non economic outcomes such as the production of “social capital” in various forms. But owner-occupied housing is a risky investment. It represents a large fraction of household assets and net worth, and house prices have proven to be quite volatile, even in highly developed diversified economies. Thus, there are potentially large gains to policies which reduce the riskiness of investment in owner-occupied housing, especially for young households. This paper provides new quantitative evidence on the ability of well-designed housing derivatives to reduce the riskiness of housing investment at the individual level. This evidence is presented for ten developed countries: eight continental European countries, the United Kingdom and the United States. We find that there are potentially large gains to households from investments in house price indexes and in other forms of risk reducing derivatives. Although our estimates are uncertain and are based upon annual data and short time series, we find that the opportunity to invest in house price indexes consistently increases risk-adjusted portfolio returns by several percentage points, not by several basis points. In Section 2, below, we review the accumulating evidence on the unique role of housing in the economies of highly developed economies. In Section 3, we compare homeownership with investments in other forms of wealth, documenting the dominant position of home equities in wealth portfolios. In this section, we analyze the time series on housing prices for a panel of fourteen developed countries to document the riskiness of investment in modern industrial economies. Section 4 presents new evidence on the potential gains which a derivative market might achieve. We begin by reviewing the results for Sweden reported by Englund et al., in 2002. We then use data from the Global Financial Data Base, together with the panel of housing prices analyzed in Section 3, to extend this work to ten countries. We find large gains to policies which encourage the hedging of housing risk. Section 5 discusses some practical details in pursuing these policies, and it provides a brief conclusion.