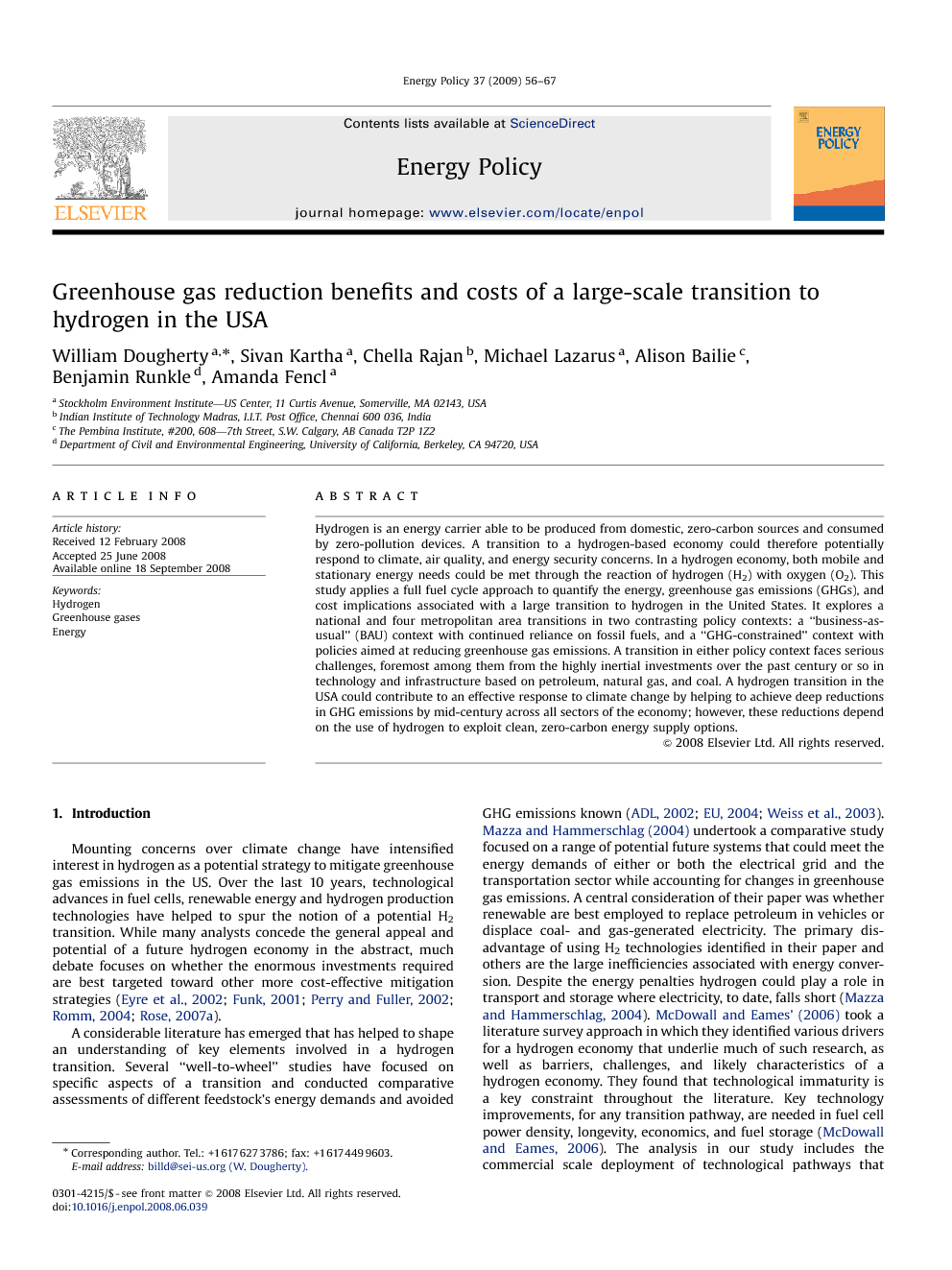 Hydrogen is an energy carrier able to be produced from domestic, zero-carbon sources and consumed by zero-pollution devices. A transition to a hydrogen-based economy could therefore potentially respond to climate, air quality, and energy security concerns. In a hydrogen economy, both mobile and stationary energy needs could be met through the reaction of hydrogen (H2) with oxygen (O2). This study applies a full fuel cycle approach to quantify the energy, greenhouse gas emissions (GHGs), and cost implications associated with a large transition to hydrogen in the United States. It explores a national and four metropolitan area transitions in two contrasting policy contexts: a “business-as-usual” (BAU) context with continued reliance on fossil fuels, and a “GHG-constrained” context with policies aimed at reducing greenhouse gas emissions. A transition in either policy context faces serious challenges, foremost among them from the highly inertial investments over the past century or so in technology and infrastructure based on petroleum, natural gas, and coal. A hydrogen transition in the USA could contribute to an effective response to climate change by helping to achieve deep reductions in GHG emissions by mid-century across all sectors of the economy; however, these reductions depend on the use of hydrogen to exploit clean, zero-carbon energy supply options.

Mounting concerns over climate change have intensified interest in hydrogen as a potential strategy to mitigate greenhouse gas emissions in the US. Over the last 10 years, technological advances in fuel cells, renewable energy and hydrogen production technologies have helped to spur the notion of a potential H2 transition. While many analysts concede the general appeal and potential of a future hydrogen economy in the abstract, much debate focuses on whether the enormous investments required are best targeted toward other more cost-effective mitigation strategies (Eyre et al., 2002; Funk, 2001; Perry and Fuller, 2002; Romm, 2004; Rose, 2007a). A considerable literature has emerged that has helped to shape an understanding of key elements involved in a hydrogen transition. Several “well-to-wheel” studies have focused on specific aspects of a transition and conducted comparative assessments of different feedstock's energy demands and avoided GHG emissions known (ADL, 2002; EU, 2004; Weiss et al., 2003). Mazza and Hammerschlag (2004) undertook a comparative study focused on a range of potential future systems that could meet the energy demands of either or both the electrical grid and the transportation sector while accounting for changes in greenhouse gas emissions. A central consideration of their paper was whether renewable are best employed to replace petroleum in vehicles or displace coal- and gas-generated electricity. The primary disadvantage of using H2 technologies identified in their paper and others are the large inefficiencies associated with energy conversion. Despite the energy penalties hydrogen could play a role in transport and storage where electricity, to date, falls short (Mazza and Hammerschlag, 2004). McDowall and Eames’ (2006) took a literature survey approach in which they identified various drivers for a hydrogen economy that underlie much of such research, as well as barriers, challenges, and likely characteristics of a hydrogen economy. They found that technological immaturity is a key constraint throughout the literature. Key technology improvements, for any transition pathway, are needed in fuel cell power density, longevity, economics, and fuel storage (McDowall and Eames, 2006). The analysis in our study includes the commercial scale deployment of technological pathways that are still being proven. The production and transmission of hydrogen has emerged as a critical element of any potential transition to hydrogen (Mazza and Hammerschlag, 2005; NRC, 2003; Brown, 2001). Centralized production facilities are more efficient, they also require storage systems, a pipeline transmission network, and pose physical energy security and environmental externality issues (Sørenson, 2005). Centralized hydrogen production could be achieved by several processes, including reforming natural gas or biomass and electrolysis from large-scale renewable installations, like solar ranches and wind farms whose generation potential are theoretically limitless (Mazza and Hammerschlag, 2004; Korpas and Greiner, 2008). Decentralized production is one way to overcome many of the infrastructural barriers to a transition (McDowell and Eames, 2006). Decentralized or on-site hydrogen production could take place in residential or commercial buildings, as could hydrogen storage for vehicles to be re-filled after daytime driving. This option could be particularly interesting as residential installation could provide residential and commercial users with their own electricity, heat and fuel for their vehicles (Rifkin, 2002; Sørenson, 2005).

The following points aim to identify the broad, high-level lessons and conclusions that can be drawn from this study. They are reasonably robust to modest changes in the techno-economic assumptions that underlie this analysis. That said, there remains considerable uncertainty in how hydrogen and fuel cell technologies will develop, and even more so in how the socio-economic and political context will evolve. Hydrogen is only as compelling as its feedstock supply. The benefits of hydrogen do not derive from its greater life-cycle efficiency, but rather from the prospect of using hydrogen to exploit clean, zero-carbon energy supply options. Hydrogen derived from some production pathways (e.g., using fossil energy resources without sequestration) could well have greater negative impacts than our conventional energy systems. Hydrogen has stiff competition from other energy options. Other options such as biofuels and electricity from renewable energy resources are strong contenders for secure, clean, low-GHG energy. Battery technologies for electric vehicles continue to advance. Cellulosic ethanol and biodiesel, in particular, have the potential for making a significant contribution to total transport fuel supply. Hydrogen could be an important component of a national climate policy based on renewables and efficiency. The GHG+H2 scenario avoids over 2 billion tons CO2-equivalent of GHG emissions in 2050 across the full fuel cycle relative to the BAU scenario. Of this, approximately 0.8 billion tons can be attributed to the transition to hydrogen. In contrast, the BAU+H2 transition scenario avoids only 0.4 billion tons in 2050, which is still about 1 billion more tons of GHG emissions in 2050 relative to year 2000 levels. Thus, uncoupled from a simultaneous transition to renewables and efficiency, the hydrogen transition alone does not put us on a trajectory of ambitious GHG reductions.