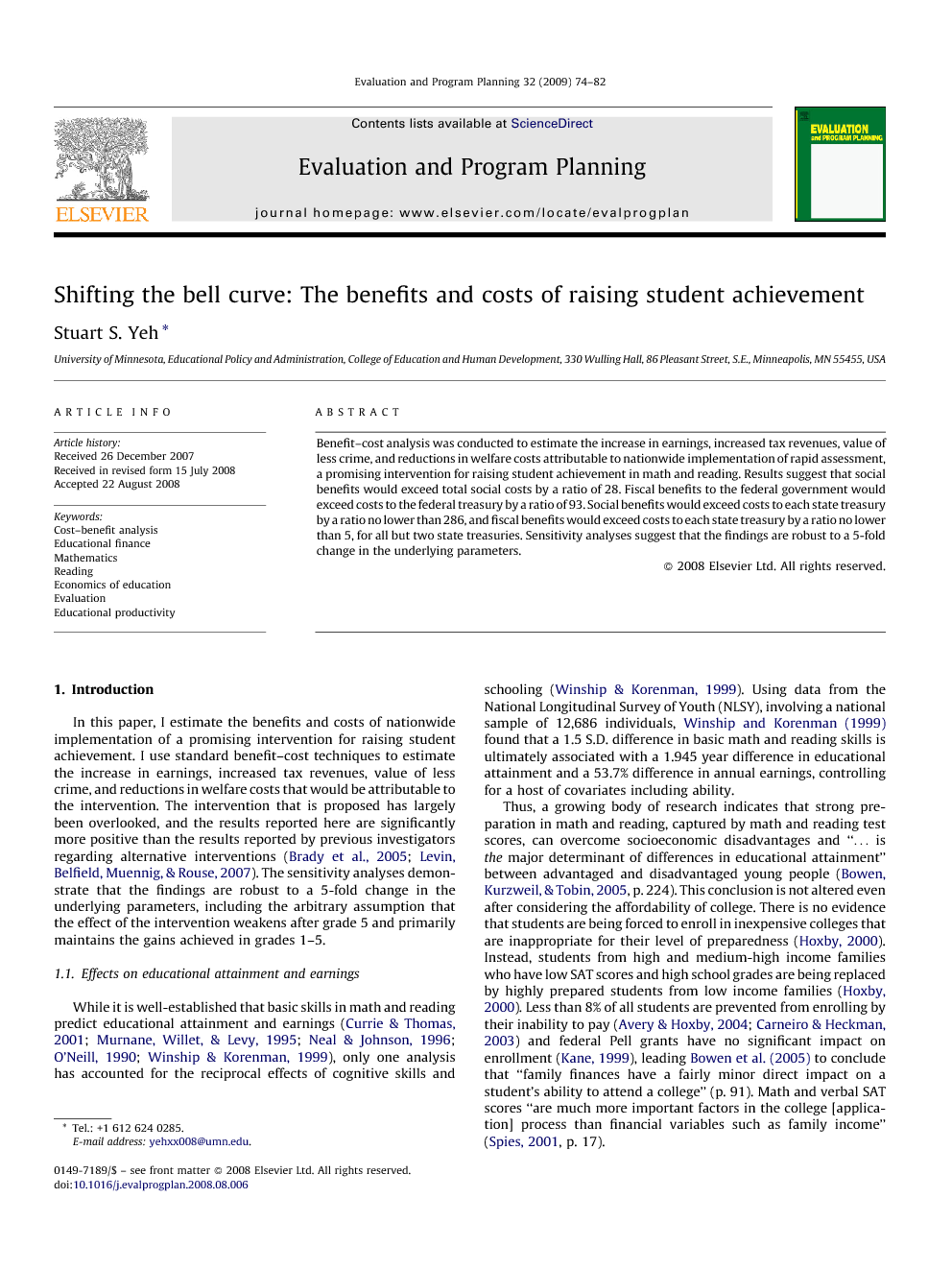 In this paper, I estimate the benefits and costs of nationwide implementation of a promising intervention for raising student achievement. I use standard benefit–cost techniques to estimate the increase in earnings, increased tax revenues, value of less crime, and reductions in welfare costs that would be attributable to the intervention. The intervention that is proposed has largely been overlooked, and the results reported here are significantly more positive than the results reported by previous investigators regarding alternative interventions (Brady et al., 2005; Levin, Belfield, Muennig, & Rouse, 2007). The sensitivity analyses demonstrate that the findings are robust to a 5-fold change in the underlying parameters, including the arbitrary assumption that the effect of the intervention weakens after grade 5 and primarily maintains the gains achieved in grades 1–5.

The results suggest that the benefits of the proposed intervention would greatly exceed the costs, and that it is feasible and cost-effective for either the federal government or individual state governments to raise student achievement and earnings – perhaps dramatically. Cost-effectiveness analyses suggest that the proposed intervention is substantially more cost-effective than 10 alternative approaches for raising student achievement, including voucher programs, charter schools, a 10% increase in existing patterns of educational expenditures, increased educational accountability, comprehensive school reform, teacher certification by the National Board for Professional Teaching Standards, a proposal to replace the bottom quartile of novice teachers with new teachers, raising teacher quality by requiring new candidates to meet a minimum SAT score of 1000, class size reduction, and high quality preschool (Yeh, 2007, Yeh, 2008a, Yeh, 2008b, Yeh, 2008c, Yeh, in press-a and Yeh, in press-b). It is useful to compare the results reported here with Levin et al.’s (2007) estimate of the fiscal benefits and costs of five leading interventions for raising high school graduation rates. Levin et al. drew upon raw Current Population Survey data to estimate differences in annual earnings by level of education, gender and ethnicity. Their figures imply that white males who are high school graduates earned, on average, 48.7% more than high school dropouts. The comparable figure for white females is 111.5%, for black males 61.5%, and for black females, 42%. These figures are not directly comparable with Winship and Korenman’s (1999) estimate that a 1.5 S.D. gain in AFQT scores is associated with a 53.7% increase in annual earnings, averaged across gender and ethnicity, because Winship and Korenman controlled for covariates including ability and accounted for the reciprocal effect of cognitive skills and schooling. However, the figures reinforce the conclusion that increases in educational attainment have powerful effects on earnings.